Celtic Quick News on News Now
You are at:Home»Football Matters»TWELVE YEARS AGO THIS HAPPENED IN SEVILLE…
By CQN Magazine on 21st May 2015 Football Matters

TWELVE years ago today we were in Seville. Many Celtic supporters just can’t bring themselves to watch the match but the Seville experience for Celtic supporters was not about the 120 minutes on the park but the entire trip with around 80,000 other supporters. Here’s a little extract from CQN’s book ‘SEVILLE: The Celtic Movement’ which will put a smile on your face today when you think about Seville…

SEVILLE – The Celtic Movement. This superb book captures perhaps better than any other just what it means to SUPPORT Celtic. The joy it brings to our lives being a Tim. One Celtic supporter – MOONEY – Seville will always be about this incident that BRTH describes in the book. Beware you are about to have a fit of uncontrollable laughter. The Seville book does that to you…

No doubt the locals had their own view of their city being taken over by this mad laughing bunch of football fans. Hopefully they will have enjoyed our exuberance and good natured attitude – although occasionally they may have been disturbed by our… well…apparent attempts at bodily self destruction.

One such group of gentle Seville folk will no doubt recall the Celtic fans with what might be accurately described as “mixed feelings” as their dining experience was interrupted by a Celtic fan who found himself in dire need.

The story is taken up by one of the unfortunate fan’s closest friends:

“Winchburgh – Edinburgh – London – Gibraltar – Seville. That was our route to get there, by a literal combination of planes, trains and automobiles. Along the way we met an unsuspecting Paraguayan couple (the last of whom we saw were walking around Kings Cross wearing sombreros and Celtic scarves) – Hazel Irvine – who was a great sport – and Baby Spice, whose management had inadvertently booked her on the same flight as countless Celtic fans. Hearing the passengers sing in unison “the front o’ the plane she cannae sing, she cannae sing fir peanuts” became a “dae ye remember when…?” moment when our Seville memories were revisited.

However that wasn’t our only “dae ye remember when…?” moment. There was one mishap that became THE moment associated with our trip. It all started two days previous…

The eight of us left our room – all eight of us sharing one room with a just a double bed, a bath and no air conditioning – and set off for the party in the park.  As we entered the park, having downed our alcoholic beverages at the gates, we spotted the alluring fountain and pond. An opportunity to cool down and splash about was too tempting and we bailed in, making sure our mobile phones, wallets and other precious items were being held by the trusted folks not wanting to get their feet wet.

Dave climbed atop the small fountain and waved a Celtic flag, waving it like he was at the opening ceremony of the Olympics; I splashed around, as did Barrie. Mooney, being an ex-swimmer at school level was doing laps of the pond with the same technique as he would use in a well chlorinated swimming pool: head under water, coming up for breath every two strokes. Mooney was swimming around like a wound-up toy shark in a bath.

Perhaps if we hadn’t have downed our drinks pre-entry to the park, or if we hadn’t baked in the near 50-degree heat we wouldn’t have been so ready to jump into the foostie pond, but at the time it was a great big dollop of fun.

The party was enjoyed by one and all, the game came and went, and our trip was nearing its end. Our single room was given away and we spent our last night sleeping on the grass outside an Irish pub. The journey home was about to begin. And Mooney was about to obtain legendary status.

All morning on our final day, Mooney had been complaining of a dodgy stomach, unable to eat a thing. He was being derided for having drunk too much, for bring half-ginger and succumbing to the heat and generally for being a lightweight.

We were killing time before our bus out of Seville was due to leave and so went for a stroll to take in a few sights the town had to offer. It was hot, so the t-shirts had been dispensed with and we were all in our shorts. Occasionally, Mooney would stop walking, hands on hips, puffing his cheeks and saying “I’m struggling, boys” or “I swear, there’s something no’ right”. The derision continued.

As the group walked on we heard Mooney, who had lagged behind, shout out “Boys! BOYS!! I think I’ve just shat myself!” We all spun around and saw a distressed Mooney, bare-chested and wearing short baby blue shorts, both hands clasping his arse cheeks. A few laughed, a few disbelieved, the rest pointed to a cafe we were standing outside and told him to get in and get cleaned up or whatever. He waddled to the cafe and saw the sign for the men’s toilet, situated at the back of the small cafe.

Mooney weaved his way towards the toilet as fast as he could and slammed the door behind him. He took off his shorts and pants, naked as the day he was born – save for a pair of Nikes – and stuffed his pants into the small wicker bin beside the sink. He turned and sat on the toilet bowl, head between his knees, in one swift movement and not a moment too soon as the dysentery took full effect as his arse coughed, spluttered and trumpeted to an eventual squeak!

How do I know all this happened? Well, what Mooney didn’t realise was that the door he slammed behind him was a stable door and so was split in two. He had only closed the top half and all of the above happened with the bottom half of the door wide open!

There sat Mooney, head between the legs and oblivious to the fact that he was facing out towards the packed cafe looking back at him in complete and utter horror, and with all of us standing pressed up against the floor-to-ceiling glass-front of the cafe unable to scream any warning in time. Most of us fell to the pavement in laughter as Mooney got himself sorted and, red faced, eventually skulked out of the café, past the horrified locals to his mates who offered zero sympathy but rather a chorus of “wait ’til everyone at home hears about this…”

He hadn’t even bought anything!

Extract from Seville – The Celtic Movement published in 2014 by CQN. You can order a hardback copy for only £10 inc P&P HERE where the Kindle version is also available. The book will be despatched by CQN. 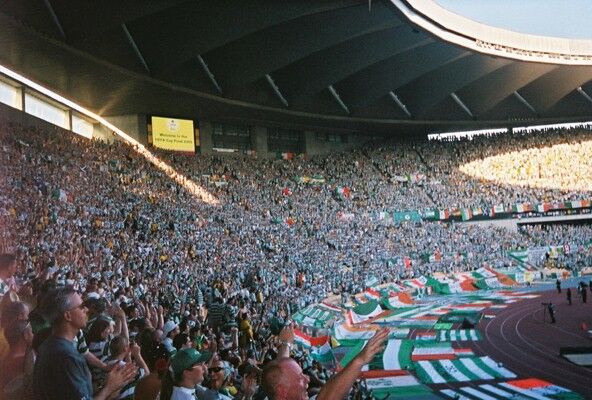 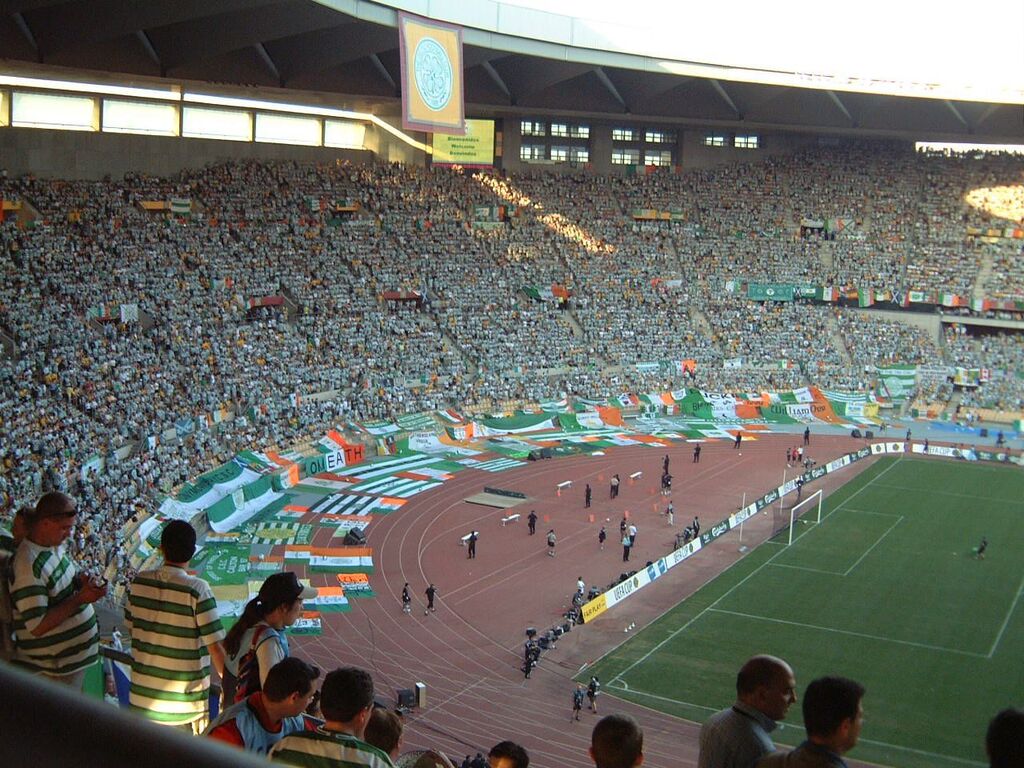 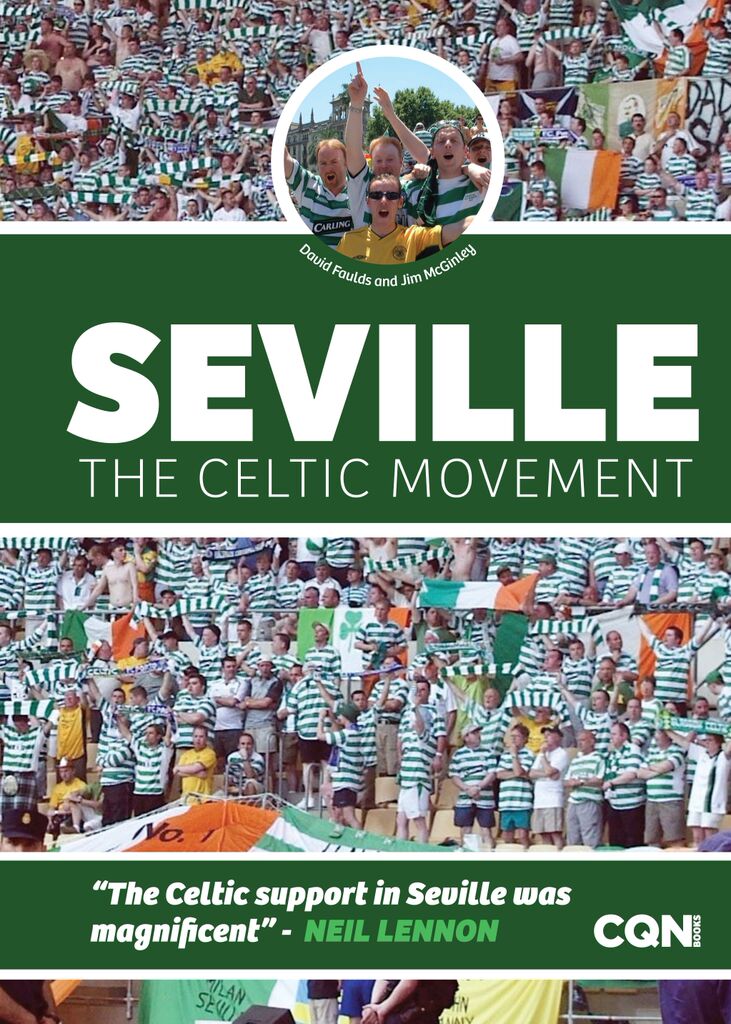