Celtic Quick News on News Now
You are at:Home»Football Matters»TWENTY IS PLENTY FOR BRENDAN
By CQN Magazine on 1st September 2016 Football Matters
BRENDAN RODGERS has been involved in a whirlwind TWENTY transfer deals since becoming Celtic boss in May.
Costa Rican international full-back Cristian Gambao became his fifth signing when he joined from West Brom in a £1million deal on Tuesday. 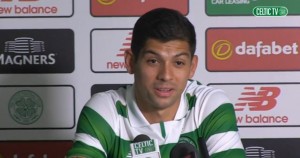 Goalkeeper Dorus de Vries, 35, was the Irishman’s fourth capture the previous week after quitting Nottingham Forest to agree a two-year contract in a £400,000 move.

He followed Scott Sinclair, 27, who switched from Aston Villa, Moussa Dembele, 20, who arrived from Fulham in June, and thirty-five-year-old Ivorian central defender Kolo Toure, a free agent following his release from Liverpool in the summer.

Stefan Johansen became the sixth player to exit the Hoops on a permanent basis when he joined Fulham while Saidy Janko, moving to Barnsley, became his ninth player on loan.
Rodgers has spent £6.4million and brought in just over £3million.

* Kristoffer Ajer also joined the Hoops this summer from Norwegian outfit FK Start, but his £800,000 deal had been arranged in January when Ronny Deila was still in charge.