SEETHING Neil Lennon insisted Celtic were denied TWO penalty-kicks in the 1-1 stalemate with Hibs at Easter Road this afternoon.

The Hoops boss saw his side lose their 100 per cent league record in the eighth game and he pointed the finger at blundering referee Kevin Clancy for failing to see a pair of clear offences that would have turned the encounter in the champions’ favour.

Ryan Christie had the first claim when defender Lewis Stevenson appeared to catch the midfielder on the bye-line, but the whistler waved play on much to the frustration of Lennon, his players and the supporters. 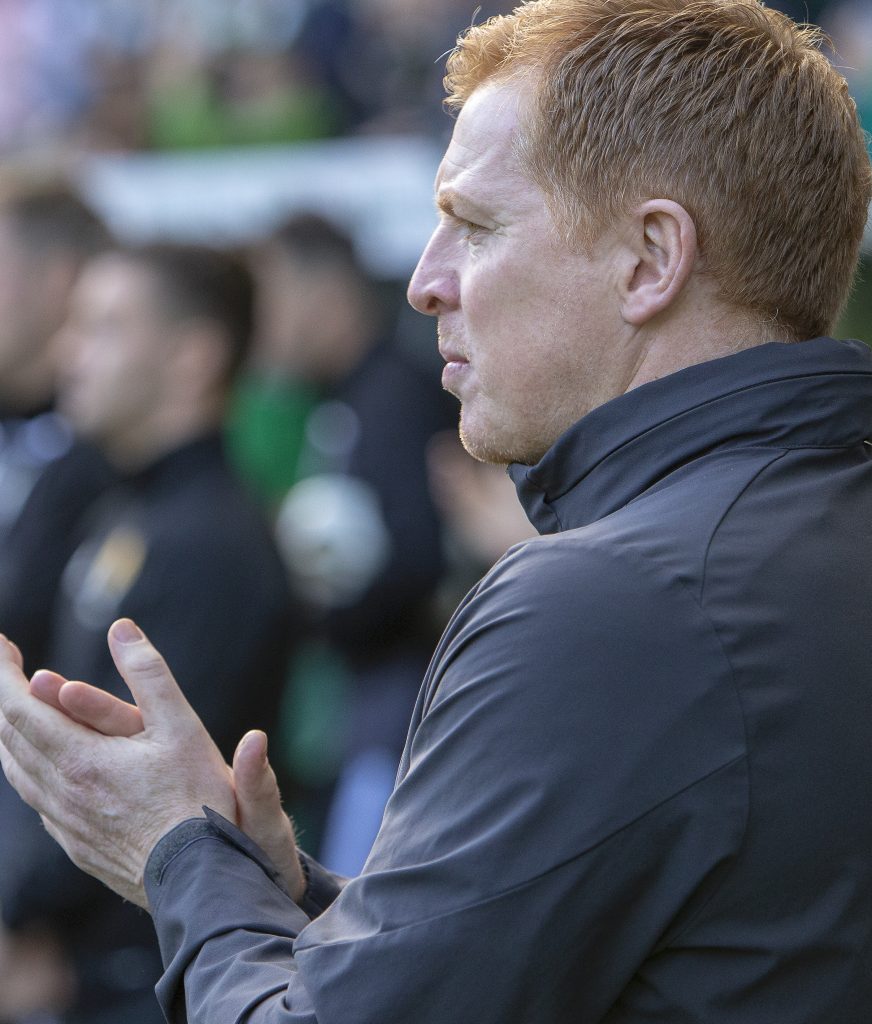 CALM BEFORE THE STORM…Neil Lennon applauds from the touchline.

Their mood wasn’t helped when TV pictures showed it WAS a spot-kick and Hibs escaped punishment.

That was followed by Daryl Horgan clattering Moritz Bauer to send the Austrian tumbling, but once again Clancy, amazingly, spotted nothing untoward and took no action.

The game was threatening to boil over before the break as Paul Heckingbottom was sent to the stands for kicking a water bottle off the fourth official.

There were eight bookings – five for the visitors – as the game ended in deadlock with Kristoffer Ajer gifting the home side the lead with a sloppy own goal in the seventh minute and Ryan Christie levelling with a brilliant header in the 24th minute. 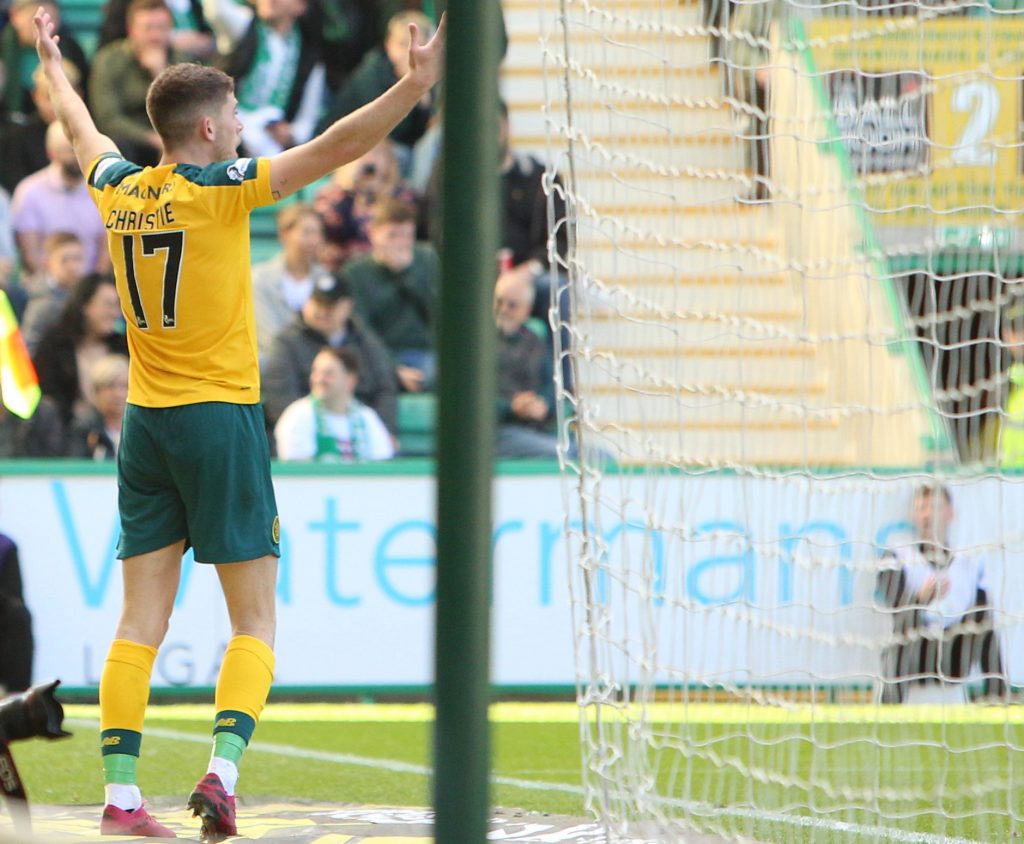 PENALTY, REF! Ryan Christie appeals in vain for a spot-kick after being brought down by Lewis Stevenson.

However, it was the ones that got away that clearly angered the Parkhead gaffer.

Lennon, speaking to BT Sport, said: “I know we dropped points and people will be saying: ‘Oh, it’s Lennon’, but we should have two penalties today.
“The one on Moritz Bauer is a clear penalty and the one on Christie is a clear penalty.

“They were not debatable penalties, they were two CLEAR penalties and would have changed the psychology of the game.

“The referee got a lot right, but in my eyes he got some big decisions wrong.” 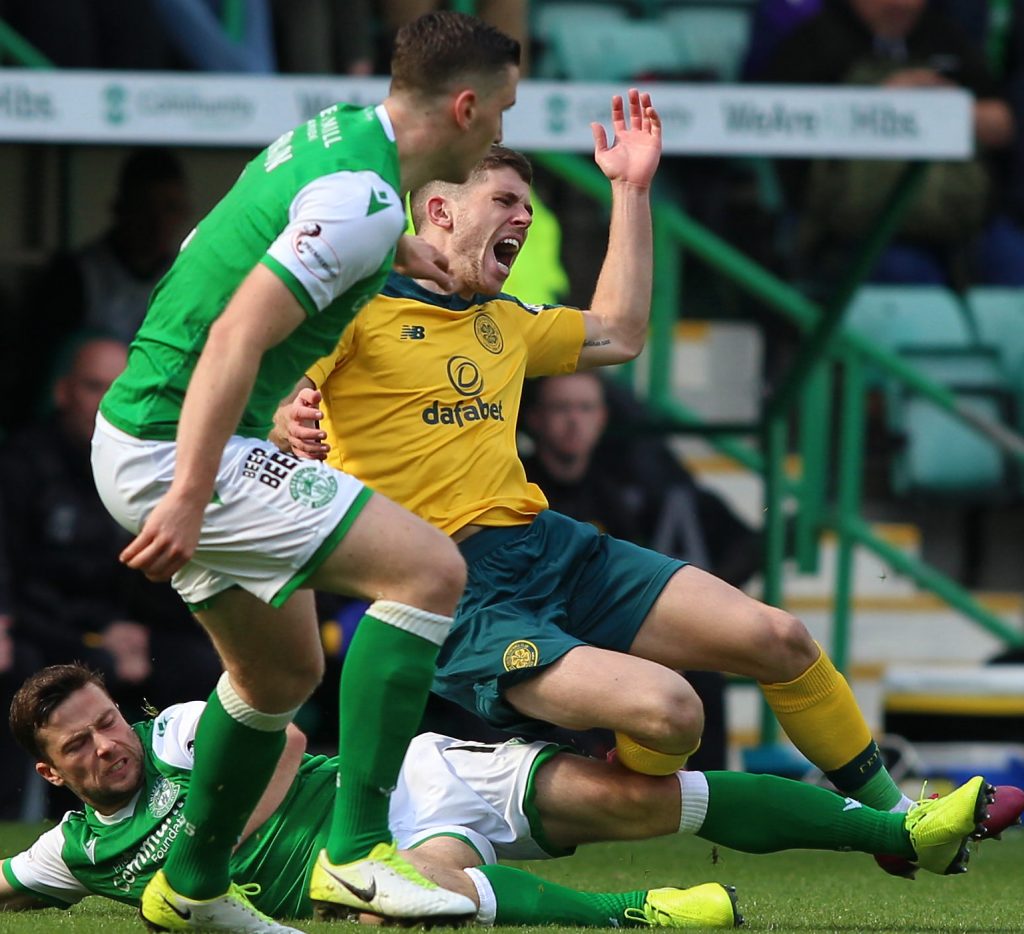 And the Hoops boss fired a warning to midfielder Olivier Ntcham after the Frenchman was booked for pushing Josh Vela who was also cautioned following a clash between the pair after a foul by the Hibs defender.

Lennon added: “You’ve got to keep your hands down.

“I’ll speak to Oli about that, I don’t know what the provocation was. Maybe both players merited a yellow card.

“There was a lot going on out there today.”