FOOTBALL is a wonderful game of opinions, but there are some views with which even the most equable person will take issue.

There is a tale in the media today stating Celtic would not be top of the Premiership by six points with five games to go.

Instead, if VAR had been in operation, Ange Postecoglou’s men would be a point adrift of Giovanni van Bronckhorst’s Ibrox outfit.

The author of the piece flags up three separate incidents where he believes the Govan club were punished by inept refereeing.

Apparently, If the whistlers had done their job properly, then Van Bronckhorst and Co would be at the top of the table and heading for the riches of the Champions League.

CONTACT…Aribo knocks the ball into the danger zone where Sakala is ahead of the last Motherwell defender and just in front of the keeper.

OFFSIDE…it looks well off as the Ibrox forward heads the ball behind the exposed Kelly from point-blank range.

GOAL…the Motherwell defenders claim for an obvious offside, but referee Steven McLean thought it was legitimate. Images may suggest otherwise.

Naturally, the scribe is entitled to his opinion, just like you and I.

But when these assertions are made on quicksand there is every likelihood they will disappear without trace.

Off the top of our heads, the CQN team can think of four flashpoint incidents this season in which our Glasgow neighbours benefited greatly from refereeing decisions.

On September 19, for instance, Fashion Sakala scored the opening goal against Motherwell at Ibrox from a blatantly offside position. Joe Aribo headed on a right-wing corner-kick and at that precise moment the Zambian striker was practically on the goal-line with just Liam Kelly between him and the goal.

He duly knocked a header past the keeper to put his team ahead in the 12th minute. Referee Steven McLean and, even more remarkably, his assistant did not see anything wrong with the goal. Have a look at the images and judge for yourself.

CRASH…Dundee striker Paul Mullen hits the turf after being down by Jon McLaughlin. It’s an obvious penalty-kick, but the Ibrox keeper escaped a straight red card. 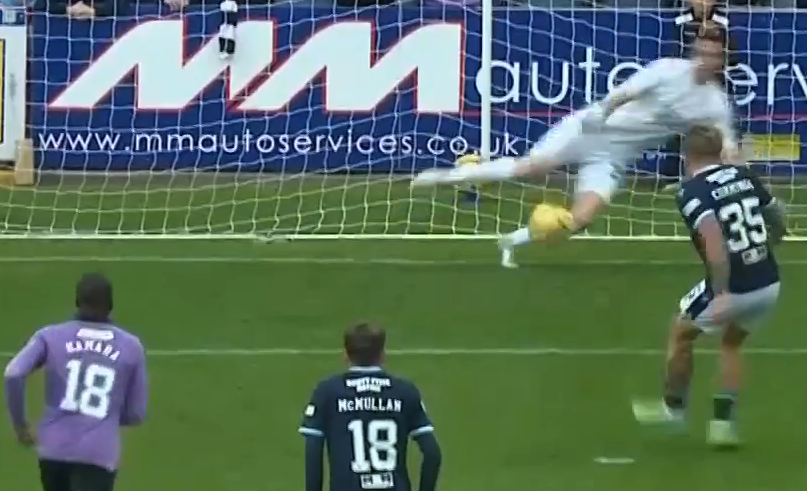 Justice was done when Kaiyne Woolery claimed an equaliser four minutes from time.

A week later at Dens Park, Dundee boss James McPake was red carded by Bobby Madden after his complaints following the ref’s extraordinary refusal to dismiss keeper Jon McLaughlin after he had hauled down Paul Mullen who was straight through on goal.

Madden, who will be in charge at Hampden tomorrow, had no option but to point to the penalty spot, but the shotstopper escaped being banished. Jason Cummings then clattered the award off the netminder’s legs and the visitors went on to win 1-0.

On October 27, there was the controversial decision by match official John Beaton to award the home side a late penalty-kick as they trailed Aberdeen 2-1 at Ibrox.

The Dons had been two goals to the good by the 16th minute with strikes from Christian Ramirez and former Celtic captain Scott Brown, but Alfredo Morelos pulled one back before the turnaround. 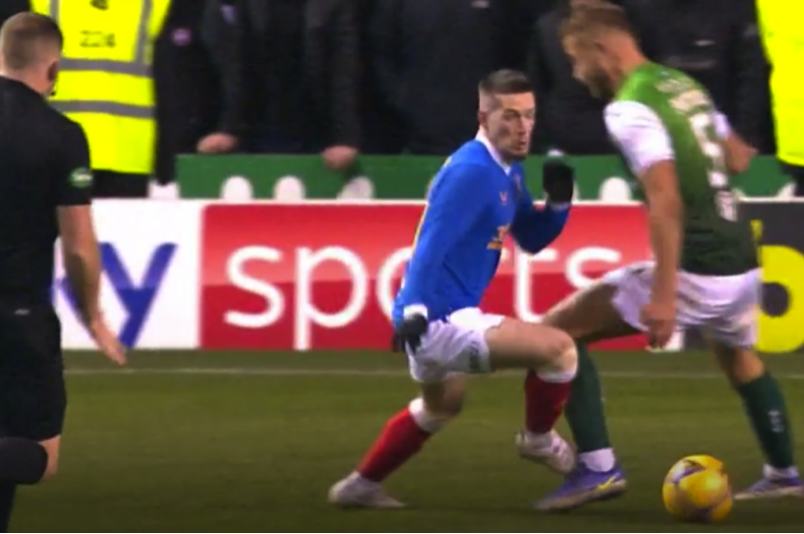 GOING DOWN…referee John Beaton gets a close-up view as Ryan Kent and Ryan Porteous come in contact. A penalty-kick in the soft variety is awarded which brings the visitors a late 1-0 win and three points.

There were only nine minutes remaining when Steven Gerrard’s former team were gifted a spot-kick after an obvious theatrical dive by Sakala. With all the practice that he has had from the spot, James Tavernier was hardly likely to pass up the opportunity of thrashing the equaliser into the net.

The same whistler took his time as he weighed up the situation when Ryan Kent and Ryan Porteous were involved in the box during the game against Hibs at Easter Road on December 1.

Only five minutes were left on the clock when the winger, notoriously quick to go to ground, went down rather too easily. There was a moment’s hesitation before Beaton pointed to the spot and Kemar Roffe belted the winner past Matt Macey.

Need we go on?

These were all contentious decisions which went the way of the Ibrox club. And we haven’t gone into 2022 yet!

Celtic are top of the Premiership and heading for their tenth title in 11 years.