MATT O’RILEY has played a mere 20 minutes of Under-21 international football – but the stylish Celtic midfielder already has his eyes on the winter World Cup Finals in Qatar.

The playmaker cost a bargain £1.5million when he was signed by Ange Postecoglou from English third-tier outfit MK Dons in January.

O’Riley has hit the ground running at Parkhead and was brought into the Danish squad for the European Under-21 Championship match against their Belgian counterparts last night.

He was given the nod by manager Jesper Sorensen to replace Oliver Rose-Villadsen in the 70th minute to represent the country of his mother’s birth for the first time.

ON THE MOVE…Matt O’Riley has his eyes on playing for Denmark in the World Cup Finals in Qatar.

And, as he has done in Glasgow with a sequence of outstanding club performances, the 21-year-old made an instant impression.

Sorensen is clearly a fan and said: “The purpose with the Under-21 side is that all players should be able to make the step to the ‘A’ team, that’s what the overall purpose is for us.

“What we have seen from Matt right now is very good. Of course, I have players in my team and squad who are ahead of Matt and players who could play with us and are already with the ‘A’ team, but we think he is promising.

“We cannot predict who is going to take the step to the next level, but right now he is in a very good position to take that next step up from the Under-21s.”

The Danish gaffer, speaking to The Herald, added: “Of course, we play to get to the Under-21 Euros and we would like to participate in that tournament, but why not?

“It doesn’t look as though he is impressively fast and yet still he is playing at a very high level with Celtic and he is able to make an impact on the games and on his squad.

“That tells me that what he does well – the way he sees the game, his skillset, his left foot is at a very, very high level – is so good that he would otherwise not be able to play at that very high level.” 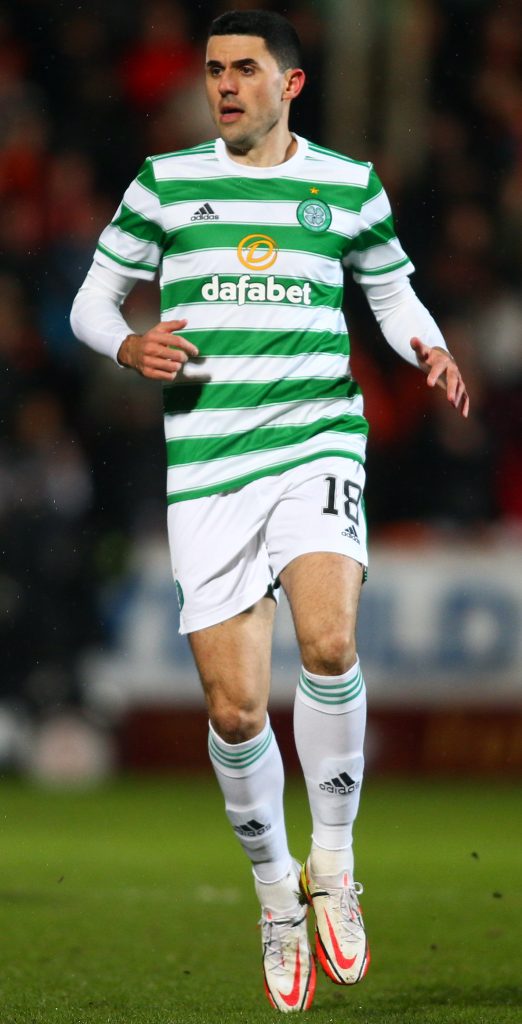 IBROX DOUBT…Tom Rogic is facing a race against the clock to be fit for Sunday.

O’Riley is now poised to play from the start at Ibrox on Sunday when Postecoglou’s men could take an enormous step towards their tenth title in 11 years.

A win would double the Hoops’ points advantage to six with only six games remaining, one of them in the east end of Glasgow after the split.

O’Riley made his debut in the derby fixture at the start of February and put in a tremendous 87 minutes before being replaced by Ismaila Soro with the team coasting to a 3-0 victory that put them on top of the Premiership for the first time in over a year.

Tom Rogic, who was forced to withdraw from the Australia World Cup squad after hirpling off with an ankle injury against Ross County, is a doubt for the match against Giovanni van Bronckhorst’s team and O’Riley could be seen as a straight replacement.