FIFTY-FOUR years ago Celtic were involved in three of the most infamous games in the club’s proud history.

Monday saw the anniversary of the first encounter in the Parkhead club’s quest to conquer the world and win the first leg of the Intercontinental Cup Final against Argentina’s Racing Club of Buenos Aires.

The confrontation at Hampden descended into brutal chaos and that sickening encounter was followed by the brawl in Buenos Aires. Up next was the explosive third match – the play-off – that became known as the ‘Second Battle of the River Plate’.

In another CQN EXCLUSIVE, Alex Gordon looks back to those three savage and vicious conflicts and today highlights the aftermath of the Montevideo mayhem with an edited extract from Bertie Auld’s best-selling autobiography, ‘A Bhoy Called Bertie,’ co-authored by the writer, which was published in 2008.

IF we thought we had had a rough ride out on the pitch, it was a mere stroll in the park for what we were about to encounter in the dressing room.

Big Jock was furious and laid into us in a way he had never done before. He looked as though he was about to explode.None of us escaped.’You have all let down Celtic,’ he bellowed. ‘You have brought shame on this club. I told you not to lose your tempers. I warned you if you did that, you would lose the game. Yet you went out and fell for all their tricks.’

Then he would point his finger at individuals and we couldn’t muster an argument among us. We just sat there like errant schoolkids and took our punishment. 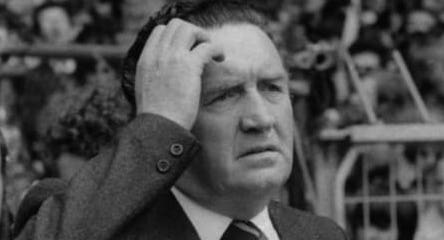 RAGING…Jock Stein gave his Celtic players a tongue-lashing in Montevideo.

The Celtic heirarchy, led by Bob Kelly, were also raging at their own players and I, for one, couldn’t blame them. We lost our discipline and our dignity in Montevideo. It was a dreadful outcome to what should have been one of the most momentous occasions in the club’s history. Racing Club had got what they wanted and we were left sickened.

To make matters even worse, the board of directors decided to fine every player once we got home. I believe we were due £250 each as our bonus for beating Dundee in the League Cup Final and the club decided to withdraw the cash and give it to charity. So, not only had we been kicked, hacked, punched and spat on, we were also fined for our troubles.

Not every Celtic player was happy at that treatment from the board and Cairney, our right-back Jim Craig, spoke up to let his feelings be known. You had to feel for him as he had played in all three games and hadn’t even been booked. It didn’t seem fair, but, then, the entire South American adventure – or should that be misadventure? – was hardly fair to us as soon as that Spanish referee blew for the kick-off on the evening of October 18 at Hampden to set in motion three games we would all rather forget, but never will. 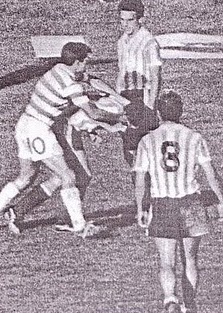 GETTING TO GRIPS…Bertie Auld lets a Racing Club player know how he feels as he reacts to yet another foul.

As a postscript, I was later told that Racing Club’s captain Roberto Perfumo, not a bad right-back as I recall, asked his club not to display the cup in their trophy cabinet. Apparently, he had been upset at how his team had won the silverware. Their coach, Pizzuti, also left a week or so later to take over Boca Juniors.

The words of Bob Kelly after the Hampden Park fiasco came back to me: ‘If they want the trophy that badly, let’s just let them have it.’

Unfortunately, the Celtic players had to endure another three hours of being booted around South America before our unworthy opponents did get their hands on the Intercontinettal Cup. But, if they were being honest, I don’t think one of their players genuinely believed they were the best club side in the world.

We were. We just didn’t have a trophy to prove it.

OFF…Bobby Lennox is marched from the pitch with the ‘assistance’ of a riot cop.

As we waited in the airport lounge to at long last escape from South America, Big Jock cut a forlorn figure as he sat at a table on his own. He looked inconsolable. There were occasions when it was best to leave our manager on his own and this was one of them. Like the rest of us, he found it difficult to comprehend what we had all been through in just a few days.

We were all at our lowest ebb as we mingled around. There was very little dialogue among the players as there wasn’t much to say. We were all hurting. We were sickened, battered, bruised and beaten. Our manager made no attempt to disguise his feelings as he sat looking at a cup of tea on the table in front of him.

We knew some of the board would have been happy to come home after the match in Buenos Aires. Jock, though, was determined to see it through. He had the utmost faith in us. He believed – and so, too, did the players – that Celtic could beat any team anywhere on the planet. That could only happen if we were allowed to play football. 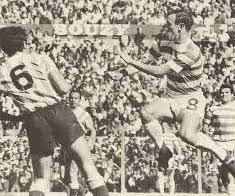 UP AND OVER…Bobby Lennox takes to the air in a confrontation with an opponent.

However, we had succumbed and taken the bait. We had descended to their level and, looking back, that should never have been allowed to happen. Perhaps we should have gone home early. Maybe we shouldn’t have been there in the first place. But I repeat: How do you react when you are continually spat upon?

Some of their players were more sleekit than the others; they never spat in your face. They would sneak up behind you and then you were aware of something landing in your hair. It was like a fly or a bee. When you put your hand up to your head you realised you had become yet another target for their reprehensible actions.

It was a long journey home, believe me. The plane was transformed into a morgue. There was still no escaping the wrath of the manager as he took the opportunity to again give us a verbal hammering.

As we neared the final leg of our marathon and miserable journey home, Jock calmed down for a moment and said: ‘We will never play an Argentinian team again if I’ve got anything to do with it.’

No-one present in that Celtic party felt inclined to disagree with our manager.