Celtic Quick News on News Now
You are at:Home»Latest News»‘WE CAN BE PROUD,’ DECLARES BAIN
By CQN Magazine on 22nd February 2019 Latest News

SCOTT BAIN has conceded four goals all season – three to Valencia and one to Partick Thistle!

The Celtic keeper has kept eight successive shut-outs in domestic games in 2019 since taking over from Scotland international Craig Gordon.

Bain also had clean sheets in five consecutive matches following the 3-1 win over Partick Thistle in the opening Betfred League Cup-tie of the season at Firhill in August.

However, the shotstopper, who signed a four-year deal in the summer following an impressive six-month loan period from Dundee, couldn’t repel Valencia as the Hoops toppled out of the Europa League at the last-32 stage.

After the dismal 2-0 first leg defeat at Parkhead last week, Brendan Rodgers’ men restored pride as a dreadful refereeing decision left them with only 10 men for 53 minutes of their encounter in the Mestalla.

Blundering match official Deniz Aytekin flashed two yellow cards at fellow-German Jermey Toljan to banish the right-back at a stage in the contest when the Scottish champions were dictating play and making chances, with two on target from eight attempts. 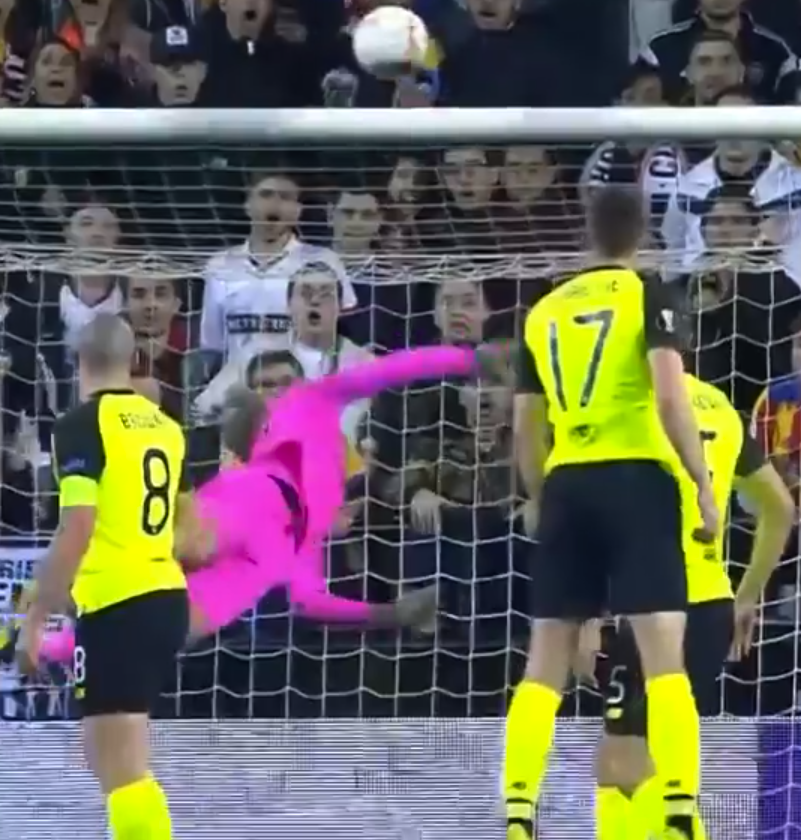 WHAT A SAVE…Scott Bain hurtles through the air to punch away a drive from Daniel Parejo.

At that point, Bain had not been called into action.

That changed, though, with the mystifying dismissal of the defender who is on loan from Borussia Dortmund until the end of the campaign.

The Hoops No.1, who eventually conceded defeat to Kevin Gameiro’s 70th-minute effort, said: “There was disappointment in the dressing room and some frustration with the end result.

“But, despite those feelings, obviously we can be proud of ourselves with the performance we gave.

“We were the better team for the 30 minutes before the sending-off and controlled the game.

“At that stage, we were doing well and it was disappointing to see Jeremy go off because we felt the red card was very soft.

“That was a setback at that time, but we didn’t fold or drop our heads.

“Afterwards, when we went down to 10 men, we still pulled together and came through again.

“We can be proud and we have learned a lot from the two games. Obviously, we need to better again in the future, but we showed we are more than capable at this level.

HELPLESS…Scott Bain has no chance as Valencia substitute Kevin Gamiero nets in the 70th minute.

“It might have been the best we have played all season and it was really good to watch.

“It was sad because, had we come away with a 0-0 given the way we played, it would have been deserved and that was the disappointing part.”

Bain insisted progress is being made on the European front and there are reasons to take encouragement from the performance in the Mestalla.

He added: “We continued to play from the back when it was on, continued to be brave even when we were down to 10 men.

“It was a tough stadium and a tough place to play, but the pitch was sensational – like a bowling green – and we moved it quickly on the surface.

“We always believe in our ability and quality and we don’t listen to outside noise.

“We are confident and brave enough to take the ball in tight situations and, as I said, we were in control of the game until the red card.

“We played right until the end, dug deep and also played great stuff at times.

“We are always learning and we are a young team who are full of young pros who are getting better and picking up more and more.

“We are all confident in our ability and it is just about continuing to learn.

“I felt that from the first leg at home, we learned a lot in the seven days and used it in the second leg.

“That is what you have to do and we showed that we can do it a high level.”

Bain is likely to keep his place for the visit of Motherwell in the Premiership on Sunday where he will be determined to achieve a remarkable FOURTEENTH successive shut-out in domestic competition.