Celtic Quick News on News Now
You are at:Home»Latest News»‘WE CAN DO BETTER,’ RODGERS
By CQN Magazine on 19th May 2018 Latest News

BRENDAN RODGERS savoured the historic moment of successive trebles and said: “Now we must make improvements.”

The relentless Celtic manager watched his side win the Scottish Cup with a 2-0 triumph over Motherwell at Hampden this afternoon.

Goals from Callum McGregor and Olivier Ntcham catapulted the Hoops into the annals of fame, but Rodgers said: “We can do better next year. It’s brilliant we’ve won three trophies and that’s what we set out to do.

“The past couple of seasons have been magical, really. I said before the game this is a chance for you to make your own history, if we win today this will live on with you in the minds of supporters.

“It’s so difficult and it’s never been done. The boys were brilliant, I’m so happy for everyone.

“I need to push them even harder next year, there are always improvements we can make.

“It’s difficult when you win three trophies two years on the trot and we now need to recover and come back with a big motivation in the summer.” 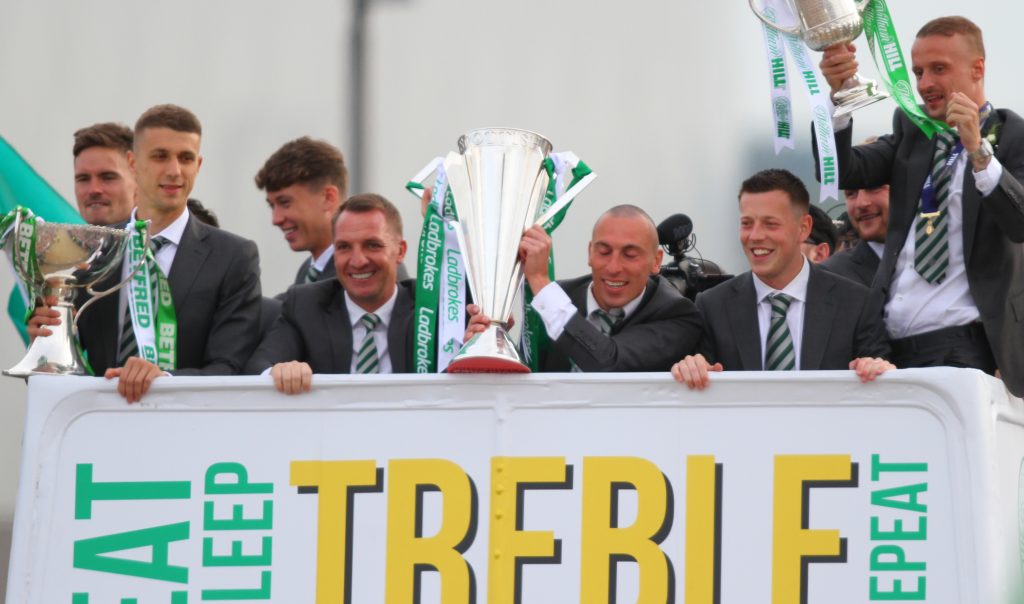 MAGIC BUS…Brendan Rodgers and Scott Brown are at the head of the open-top bus parade as the players show off this season’s silverware. Pics: Geo.

Skipper Scott Brown echoed his manager’s thoughts and was keen to stress the importance of making an impact in the Champions League.

He said: “A double treble, I don’t think anyone would have put that on the cards when the manager first came in. There have not been a lot of changes since he first came in, but it shows you what hard work can get you.

“We’ve made the Champions League in the last two years and now we’ve got to do that again next season.

“The double treble is exceptional right now, but it makes this club a lot of money to get into the Champions League and that’s what we want.

“We’ve got to go again, it all starts again in four weeks.

“Now we’ve got to go and chill and recharge the batteries and some lads have got international games, but it’s about how we come back next season and we’ll come back stronger and fitter and there’ll be a few additions to the squad, I’m sure.”a