Celtic Quick News on News Now
You are at:Home»Latest News»WE CAN WORK IT OUT: ANGE’S RALLYING CALL
By CQN Magazine on 18th June 2021 Latest News

ANGE POSTECOGLOU is looking forward to clocking in at Celtic – and admits he has already begun preparations for the crucial opening encounters.

The new Hoops boss, 55, is eager to get involved in the pre-season plans and has been in daily communication with coaching staff to get ready for the kick-off.

Postecoglou said: “I’ve been hard at work already and it’s been great to connect with everyone at the club and get to know everyone. I’m keen to try to get as much work done before I get there, but my own view is that we can’t be more prepared than we are at the moment in terms of the conditions we’ve had to face.

“I’m fully confident that once I hit the ground running, we’ll get started and I’m really excited about the fact that we’ve got something to look forward to and a bit of a target there over the next four or five weeks.

“A lot of the lads, the staff at the club, are already putting plans in place. I’m talking to them daily so they kind of know how I want us to prepare.

“There’s a lot of work been done already and certainly, in the first few days, the staff are really keen to set the new tone and the agenda that I’ve got. So I think the players will feel a difference straight away, but, obviously, for me, the real impact will come when I get there and I can talk to people. 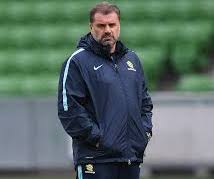 STANDING START…Ange Postecoglou is preparing for a whirlwind of pre-season work.

Postecoglou, speaking to the Celtic View Podcast, continued: “The target is that first Champions League game, but we’ve got a lot of work to do before that.

“It’s obviously a very significant fixture for us and it comes pretty early. It’s exciting for me, for the players and the whole club.

“It gives us a target now that the pre-season is about to start and I’m looking forward to it. Those great nights in Europe are what Celtic are all about, so, hopefully, we can create more magic this year.”

Dates have been confirmed for ties against Danish outfit FC Midtjylland in the second qualifying round of the tournament.

The new gaffer admitted he is aware of the danger that will be posed by one the opposition’s star men, Australian international Awer Mabil.

Postecoglou added: “I know Awer well. He’s a fantastic young man and a great talent. He’s been there for quite a while and because of that I know the club quite well.

“I’ve followed his progress and the club’s progress and it’ll be great to see him again because, as I said, he’s a great young talent.”