Celtic Quick News on News Now
You are at:Home»Latest News»‘WE COULDN’T HOLD HIM BACK,’ ADMITS HOOPS BOSS ON THE RISE OF FRIMPONG
By CQN Magazine on 6th April 2020 Latest News

JEREMIE FRIMPONG left Celtic’s bosses with no alternative but to give him a first-team chance.

John Kennedy, the Hoops No.2, admitted the Dutch teenager, who arrived on a four-year deal from Manchester City on the September 2 transfer deadline, admitted the champions couldn’t hold him back.

Frimpong, whose fee will rise to £1million with add-ons, was so impressive in his initial days at Parkhead that he made his debut in the top side against Championship side Partick Thistle at Parkhead on September 25 – a mere TWENTY-THREE days since his deadline-day arrival.

The Hoops coasted to a 5-0 triumph and the speedy right-back became an instant hit with the fans.

Kennedy, speaking to the Celtic View podcast, said: “It’s been a big plus for us. Jeremie came in as a young player with talent to initially be around the squad, to get a feel for it and then for us to build him up to become hopefully an important player in the future.

“But, to be fair, it was one where, over a period of weeks, and seeing him on a daily basis, he kept impressing. He kept showing what he was about. He’s very determined, he’s got terrific pace and what fans were seeing in the games, we were seeing on a regular basis in training.

IN WITH A SHOUT…Jeremie Frimpong after scoring his first Parkhead goal against Hibs.

“And I remember there was just one day when myself, the manager, Neil Lennon, and Damien Duff were talking at the side of the training pitch and it was a case of we’re just going to have to put him in, we couldn’t hold him back any longer. And, basically, that’s what happened.

“That’s how he got himself in the team and it was through how he was training and the impression he was making within that. Forget about his age, or the size of him or anything else. What he can offer and the ability he has was just too much to hold back.

“You get that with young players. There comes a time, and you can sense it, where you’re going to have to put them in, whether that’s an appearance here or there, or right, okay, just put him in and see how he goes.”

Frimpong also played in the 4-1 win over Ross County in Dingwall on October 19 and he scored his first goal in his third outing, the 4-0 rout of Aberdeen at Pittodrie.

He claimed his initial striker at Parkhead in the 2-0 victory over Hibs on December 15.

Before that, though, in only his ninth professional appearance, the Amsterdam-born performer, who turned 19 just before the turn of the year, celebrated his first piece of silverware in a hectic encounter against Steven Gerrard’s Ibrox outfit in the Betfred League Cup Final at Hampden on December 8.

Christopher Jullien scored the only goal of the game on the hour mark – and three minutes later Frimpong was red-carded by Willie Collum as he conceded a penalty-kick which, thankfully, was saved by Fraser Forster.

A clattering and needlessly-wayward challenge by Kilmarnock midfielder Alan Power in the fading moments of the Hoops’ 3-1 victory at Rugby Park on January 22 left the teenager sidelined for a spell before he made his inevitable return. 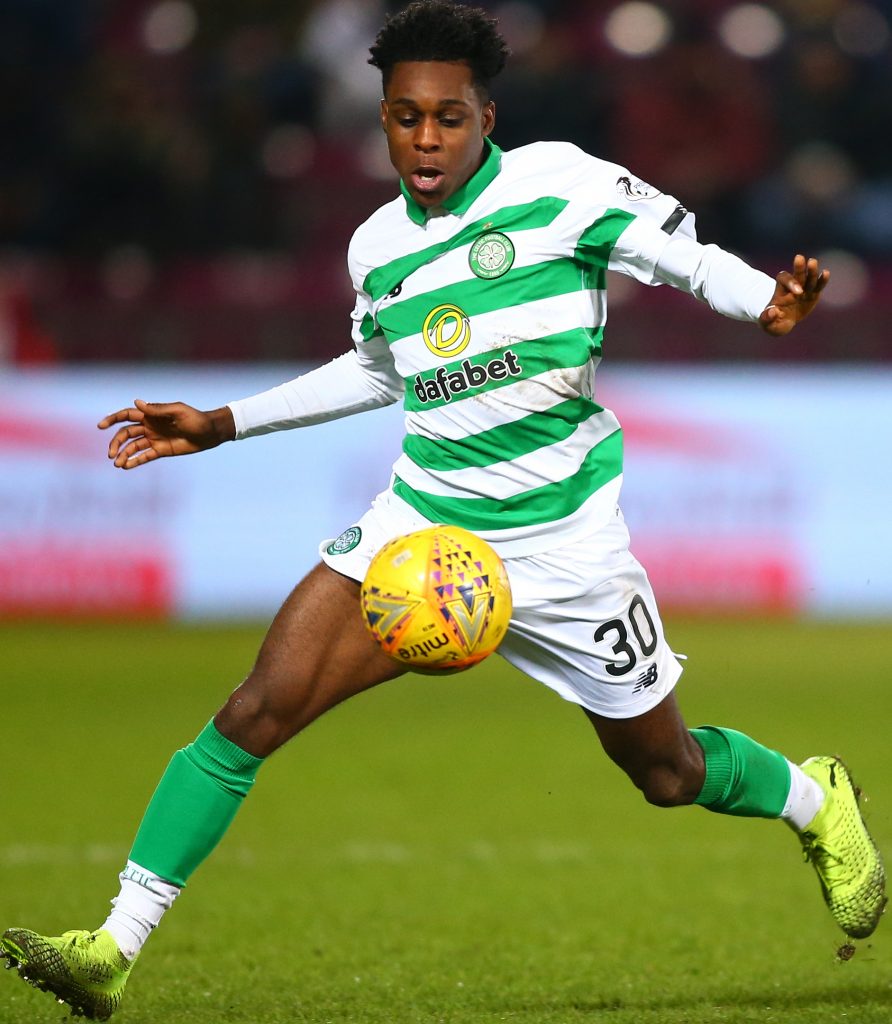 ON THE BALL…Jeremie Frimpong on the attack.

Kennedy added: “The manager had great faith in Jeremie. He identified quickly that we had to give him the opportunity and then see how he develops and progresses. He’s never looked back. And he’s been an important player for us in the games he’s played.

“Every day he’s the exact same. He doesn’t change who he is. He’s very real, there’s no falseness about him and he’s very bubbly and a great character to have around. Plus he’s a very good trainer.

“But he knows that. He’s one where we’ve got regular contact with and we chat to him and we work on things. With his ability – and the natural and physical elements of his game that he offers – he’s only going to get better and better.

“So, the more games he plays, the more he works with us, hopefully he keeps developing and who knows where that may lead to?”