Celtic Quick News on News Now
You are at:Home»Latest News»‘WE DON’T GET CARRIED AWAY,’ CALMAC
By CQN Magazine on 25th April 2019 Latest News

CALLUM McGREGOR insists Celtic will remain focused totally on the season run-in and not get carried away with previous successes.

The Hoops have won the last seven successive domestic pieces of silverware that have been up for grabs since the start of season 2016/17.

The champions are within touching distance of their eighth consecutive title and can edge ever closer to the flag when they play Kilmarnock in an emotion-charged Parkhead on Saturday.

The curtain will come down on the campaign with the Scottish Cup Final encounter with Hearts at Hampden on May 25 – the exact date the team became the first British club to conquer Europe in Lisbon when they overcame Inter Milan 2-1 and the legendary Billy McNeill held aloft the glittering prize in the Portuguese sunshine.

Success over the Tynecastle outfit at the national stadium in the grand finale would bring  Celtic an unprecedented treble treble.

McGregor also paid tribute to inspirational skipper Scott Brown as the players geared up for a surge towards the championship and the Cup.

The Scotland international playmaker, speaking to the Daily Record, said: “It’s very much a level-headed dressing room, we don’t get carried away. These guys just keep winning and it becomes a habit.

“You become so hungry to win games and be successful the players never get above their station.

“At Celtic, you need to be humble and respect every opponent. That’s what we try to do then we try to beat them with our football. 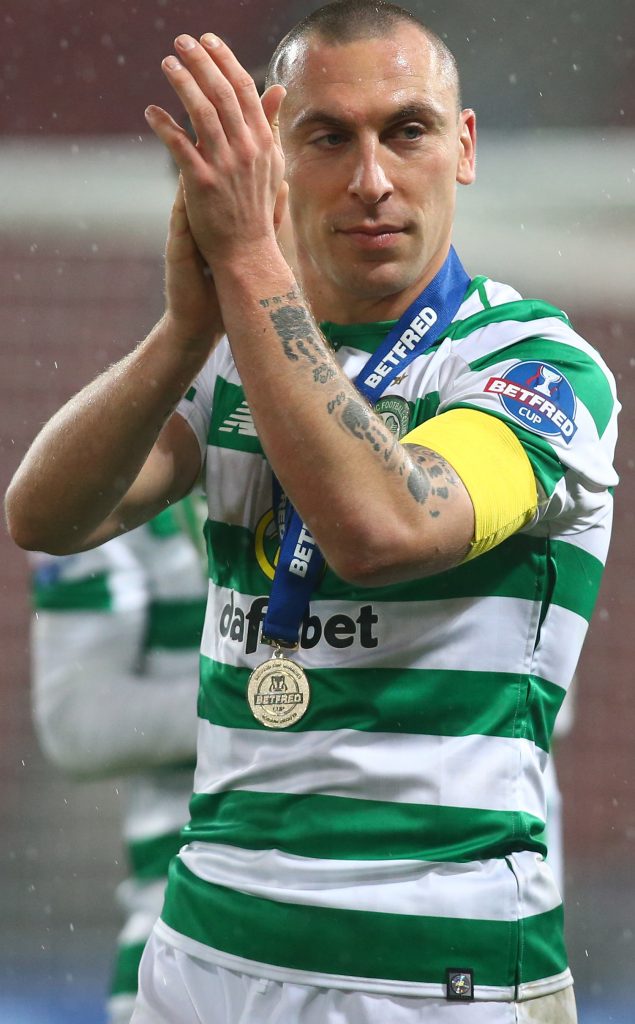 “Broony helps to keep us calm. He’s an incredible player and has been for a decade or more at Celtic and before that as well.

“I’d rather speak about his footballing ability and how good a captain and leader he is for us boys. To have him beside you, is a massive positive.

“To play alongside him, you have to learn off him as well, and take all of those bits from his game and bring them into your own game to improve yourself, too.”

McGregor added: “We’ve been so successful, but you can never take that for granted. You never know when it’s going to end, so you just keep going, foot to the floor, and just be relentless with it.

“There was a lot of talk before the Aberdeen semi-final that a lot of people fancied their chances. You get those thoughts from outside, but you try not to listen to it, especially us up at Lennoxtown.

“We focus on our job, we know our game plan, we know what we want to do in the game.

“It’s about us trying to implement what we do and coming to the big stages again, trying to perform and earning the right to win.

“It’s amazing the character of these boys to just keep churning out results and in big games, as well.”