Celtic Quick News on News Now
You are at:Home»Latest News»‘WE MUST HAVE BELIEF,’ RODGERS
By CQN Magazine on 19th February 2019 Latest News

BRENDAN RODGERS has hailed Valencia as an “outstanding” team, but insists Celtic should not be ruled out as they prepare for their Europa League last-32 tie in the Mestalla on Thursday night.

The Hoops are trailing 2-0 following a disappointing display at Parkhead last week and have been just about written off in some quarters.

However, a defiant Rodgers insisted the tie is NOT over.

He said: “The first goal in this game will be important. If we can get the first goal, we don’t need to go flying in after that.

“We just need to settle ourselves into the game and find our confidence.

“Of course, we know it’s going to be tough. You can see the level that they’re at and the investment, everything is there to see that they’re an outstanding team.

“We must have a belief and confidence that we can get a result.

“No matter how tough, we’ll go there and if we can get the first goal it can open things up for us.

“Obviously, we were disappointed with last week’s result. Parts of the performance were good, but we made a couple of mistakes that cost us.” 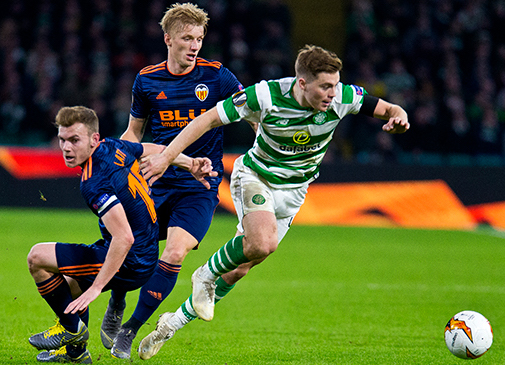 ON THE RUN…James Forrest tries to break through against Valencia last week.

The champions were undone in front of their own fans under the lights in the east end of Glasgow by two goals either side of half-time from the Spanish cracks that brought a second successive European home defeat following the 2-1 reverse against RB Salzburg in Group B in December.

He added: “Kieran will hopefully be back for the Motherwell game on Sunday. That’s the plan, anyway. By the end of this week that will be two full weeks he will have had training with the team.

“We would hope that by the weekend he’ll be in with a chance.”

Emilio Izaguirre toiled at left-back against Valencia and missed the 1-0 triumph over Kilmarnock on Sunday with Jonny Hayes taking over the No.3 slot.

The Republic of Ireland international put in a great shift and could keep the shirt for Thursday’s tie.

However, fans’ favourite Tierney, who has been out for over two months with a persistent hip injury, would get a rousing welcome back if he turns out against the Fir Park outfit.

* Rodgers was speaking to this week’s Celtic View.