FILIP BENKOVIC has delivered a Europa League warning to RB Leipzig ahead of Thursday’s Group B encounter at Parkhead.

The big-spending Bundesliga outfit coasted to a 2-0 win over Celtic at the RB Arena last month to go three points ahead of Brendan Rodgers’ side after as many games.

The Hoops were hit by a swift one-two in Leipzig as the hosts claimed both goals in the space of a quickfire four-minute first-half burst.

Benkovic was still recovering from injury at the time and remained on the substitutes’ bench even after Jozo Simunovic had been carried off to be replaced by Jack Hendry.

The on-loan Croatian Under-21 international, who scored his first goal for the club in the 5-0 destruction of Hearts at the weekend, is determined to play his part in this week’s return.

He said: “I think it will be a different game here. The atmosphere is different and the pressure also feels different.

“We seem more confident on our own pitch. We have the backing of our support and the way we have played in the last few games has given us a lot of belief.

“We know that RB Leipzig are a good team, but I think we have seen enough to feel we can win the game. It will not be easy for us. 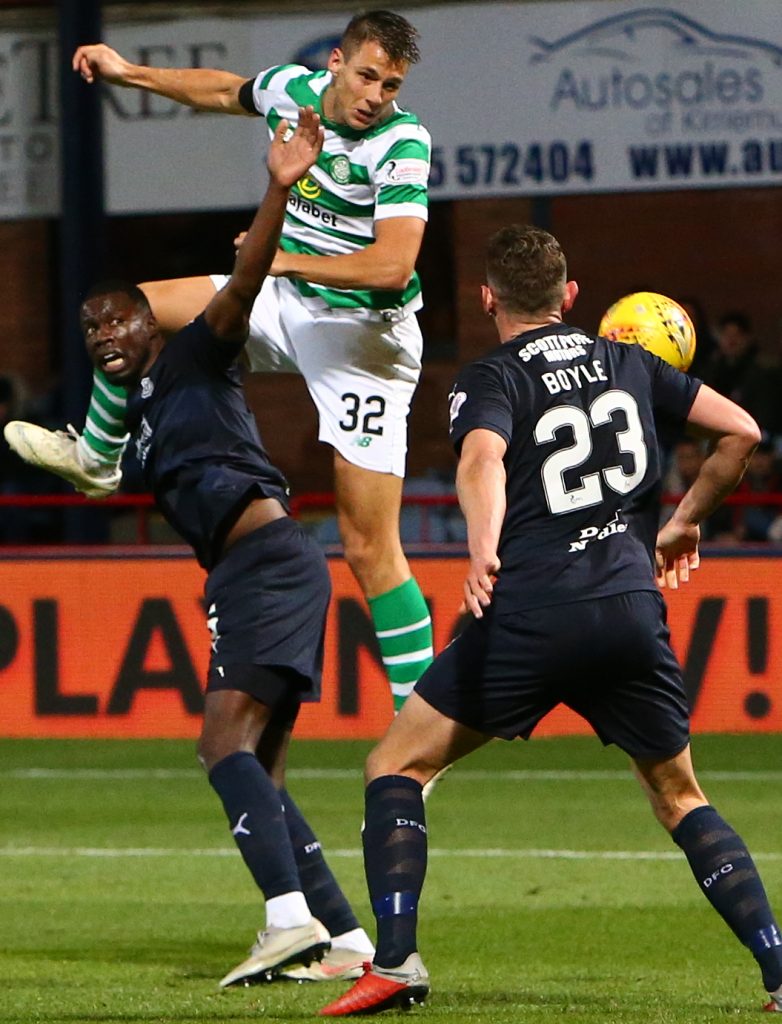 HEADMASTER…Filip Benkovic takes to the air as he puts pressure on the Dundee rearguard. Pic: Geo.

“But we are playing well just now. There are a lot of goals and that always gives you so much confidence as a team.

“I am not trying to think we need to win the game or anything like that. I reckon we just need to let the game take care of itself and not put more pressure on ourselves.

“If we go out and play as we can then I think we can take the three points. It is important we concentrate on doing the right things.

“We have seen that Leipzig have quality. It is a step up when you go into Europe, but we feel that we are ready for that. There have been a lot of quality performances in the last few games, so if we can take that form with us into the game, then we can get what we want.

“The atmosphere when we beat Rosenborg 1-0 in front of our supporters was very good. We had to be patient that night before we got our reward and it might be a little bit like that again.

“Whatever happens, we need to believe we can get the win.”