CALLUM McGREGOR will switch his focus back to Celtic against Hibs on Saturday following a steep learning curve with the Scotland international team.

The Hoops midfielder netted a penalty-kick in the 5-4 spot-kick shoot-out Euro Play-Off Final success over Serbia in Belgrade a week ago to guide the nation through to their first major tournament since the World Cup in France 22 years ago.

However, the euphoria was put in cold storage with back-to-back 1-0 losses from Slovakia in Trnava on Sunday and Israel in Tel Aviv last night to scupper their bid of winning their UEFA Nations group.

McGregor, Ryan Christie, who scored the goal in the 1-1 draw with the Serbs before the dramatic penalty-kick conclusion, and Leigh Griffiths, who came on as a substitute in the Nations League outings, were involved in the ups and downs of fortune at that level.

The 27-year-old Hoops anchorman, speaking to the Evening Times, admitted it had been “an incredible week” with Steve Clarke’s squad and said: “That is the pinnacle of a player’s career, to go and play in major tournaments and get your country there, so it’s been a brilliant week in terms of the success we’ve had. 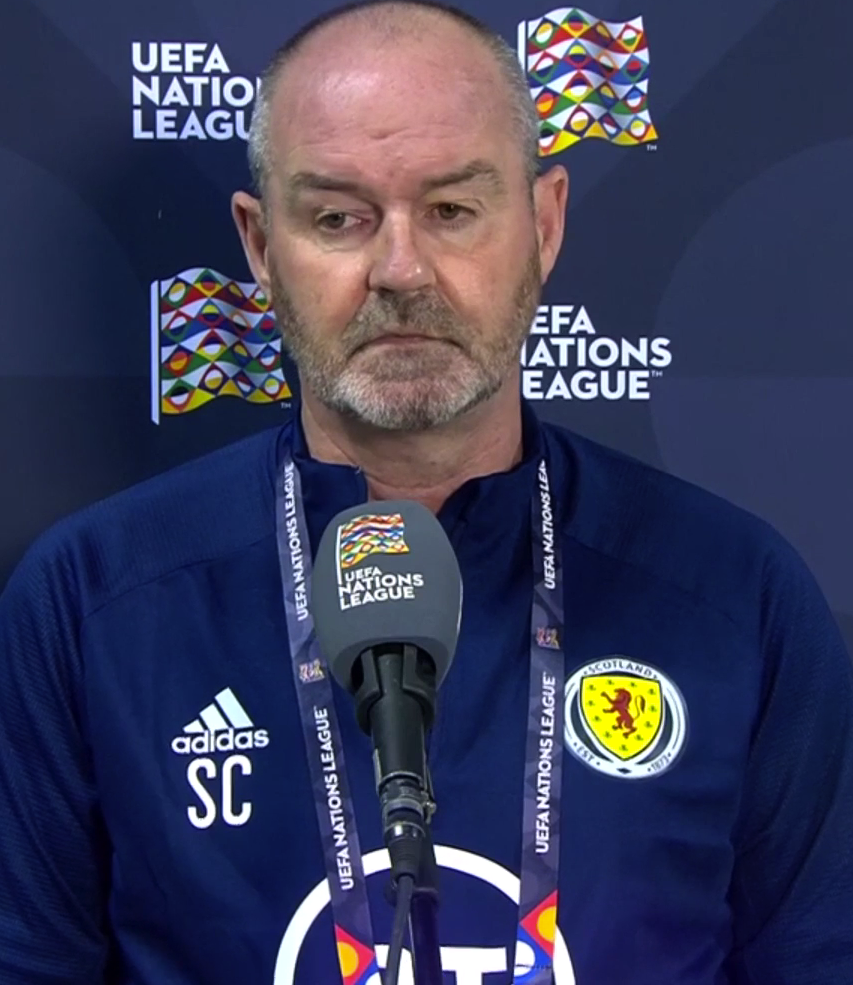 A LOT ON HIS MIND…manager Steve Clarke rode the international rollercoaster over the past week.

“But we need to stay humble and continue to improve. We want to be a side that when we come together, we can qualify for tournaments on a regular basis.

“We were in a great position to give ourselves a play-off for the World Cup and to win against Israel would have been a great way to finish the camp.

“It’s a disappointing result, but I think when you look at the performance to win the play-off final to get us to the Euros, then you have to look at that in a positive light, as well.

“We learned a lot this week – good and bad – and we will take that back with us for when we come together in March.

“We have to look at where we have come in a short space of time. We’ve done well, we’ve qualified for the Euros, so we put that to one side.

“But if we are going to keep progressing then we have to take our chances when we get them, because as you see at this level, they can get a counter-attack and you can quite easily lose the game.

“That’s the next step for us in our development, to take our chances.”

After firing consecutive blanks, it’s clear where the Scots’ weaknesses are with Oli McBurnie, who came on at the same time as Griffiths in the 61st minute last night, still without a goal from open play in 15 appearances.

McGregor, Griffiths and Christie will get the opportunity of instant revenge on the man who shut them out in Tel Aviv, Ofir Marciano, when the champions play at Easter Road on Saturday.

The Leith No.1 made a string of good saves, including a full-length stoppage-time block from a ferocious free-kick from Griffiths.