Celtic Quick News on News Now
You are at:Home»Latest News»‘WE WILL GIVE EVERYTHING,’ RIVAL BOSS
By CQN Magazine on 13th December 2018 Latest News

SALZBURG boss Marco Rose insists Celtic will have to EARN the point that is needed to reach the Europa League knock-out stages next year.

Brendan Rodgers’ side go into tonight’s final Group B game at Parkhead in the realisation a draw will be sufficient to make progress in the tournament.

Rose has already led the unbeaten Austrians to the last-32 with five victories from five outings and he masterminded the turnaround in their fortunes in the first tie against the Hoops in Salzburg where they trailed at half-time to a two-minute strike from Odsonne Edouard.

Three goals in the second-half changed the complexion of the confrontation and, of course, the Scots’ cause wasn’t helped with the red card for James Forrest that saw them finish the match with 10 men.

Rose said: “Obviously, Celtic will have more supporters than the last game in Salzburg, but we are looking forward to the atmosphere.

“It is clear that Celtic need a point, but we want to play a good game, so Celtic have to earn that point because we will give everything.

“We have reached our most important goal already, we have advanced to the knock-out stages. 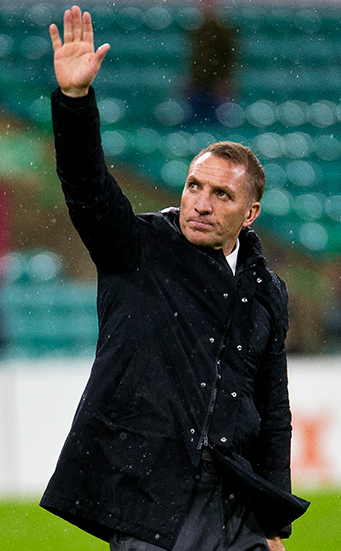 THANK YOU…Brendan Rodgers salutes the Celtic fans after the 2-1 win over RB Leipzig.

‘We are in first place, but it is not all about winning six games, we want to be part of a great game.

“I think everyone who comes here have earned that right to experience a great game.

“It is a very cool stadium, you can feel the atmosphere even without the supporters. Even in the locker rooms you can breathe in the atmosphere.

“The supporters are notorious, amazing. We are happy to be here, but we also want to show that we are rightfully here.”

This evening’s game will be Celtic’s seventh at Parkhead in this campaign with a previous record of five wins and a draw.

Rodgers has seen his team emerge victorious in their matches against Alashkert (3-0), Rosenborg (3-1 and 1-0), FK Sudova (3-0) and RB Leipzig (2-1). There only draw came in the Champions League qualifier against AEK Athens (1-1).

A similar result against the Austrians will be enough to take the side into the last-32 of the competition for the second successive season.