CELTIC defender Christopher Jullien has a message for their rivals: We will NOT be bullied.

The £7million centre-half was almost knocked out in the Europa League 1-1 draw with FC Copenhagen in the Danish capital last week after being walloped in the face during an aerial collision with Dame N’Doye.

The game was held up for about three minutes and, thankfully, the towering Frenchman recovered after treatment.

The sickening smash in the face meant a visit to the dentist after the game, but Jullien did let his distract him from one of his most impressive performances of the campaign that sets up tonight’s crucial second leg at Parkhead with a place in the last-16 of the competition in tomorrow’s ballot.

The Hoops rock, speaking to the Daily Record, said: “I remember the incident. It was a bad one, but when I take the field I always want to give it everything I’ve got and I had no intention of leaving my partner or the rest of my team-mates.

“We were only 10 to 15 minutes into the game at that stage and I had plenty of energy. I was excited about the tie and, in my head, it was impossible for me to leave the pitch. 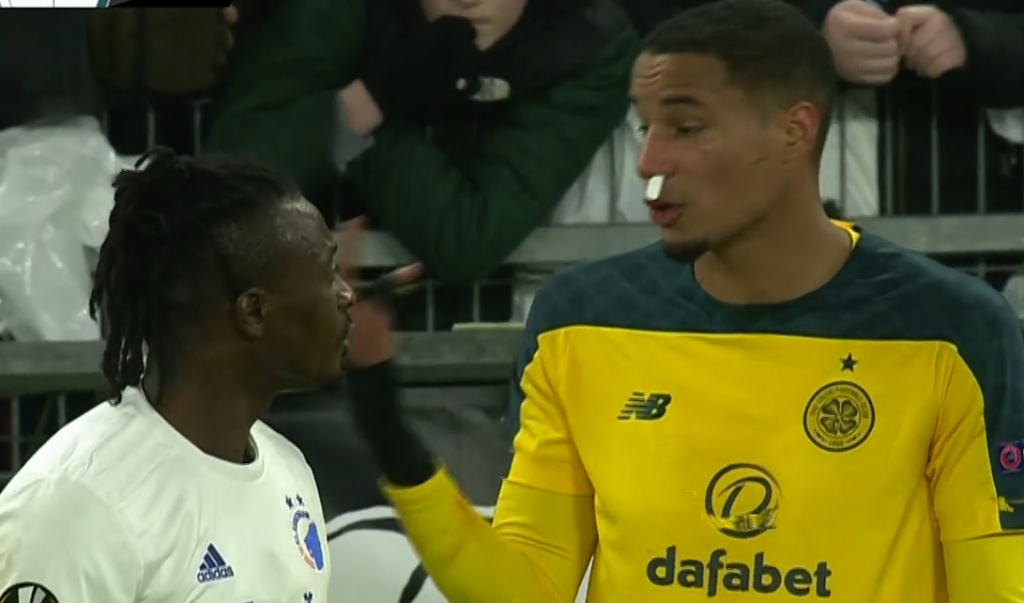 PAIN GAME…patched-up Christopher Jullien and Copenhagen’s Dame N’Doye after the clash of heads.

“I lost some parts of my teeth, but it’s okay. It’s important that teams know we won’t be bullied.

“Every game’s tough, but we always get up and we do that after every bad moment we have.

“If a team tries to rough us up then we’ll just keep trying to do our best, again and again.

“When there is a bit of trash talk and little things off the ball, even contact and stuff like that, to win then is more enjoyable. That’s normal, it is what it is. Every sport is the same.

“Kristoffer Ajer was talking to me about some hit he had taken, but sometimes you can’t be pretty if you’re going to win.”

Jullien added: “After certain games I’m not happy to come off covered in bruises, but it is what it is.

“In Scotland, the game is more physical and there is always going to be an element of going to battle. I’m ready for that now.”