CELTIC will not intimidate AIK Stockholm in the first leg of their Europa League play-off at Parkhead on Thursday night, insists striker Tarik Elyounoussi.

The Norwegian hitman, who is suspended for the tie, is adamant the Swedes won’t be scared of the Hoops’ reputation.

And he points to the four goals conceded against Romanian opposition in Glasgow last week as reasons for optimism among the visitors for another crucial European encounter.

Elyounoussi, in a report in the Daily Record, said: “Of course, Celtic have a lot of experience in Europe, but they have not been so good in recent years.

“We will not be dazzled by Celtic.

“When you hear the name Celtic, you think they are a big team.

“But they lost four goals at home to Cluj and the Scottish league is not so good.

“We won’t be intimidated, either, by playing in their large stadium. We are all looking forward to facing them.” 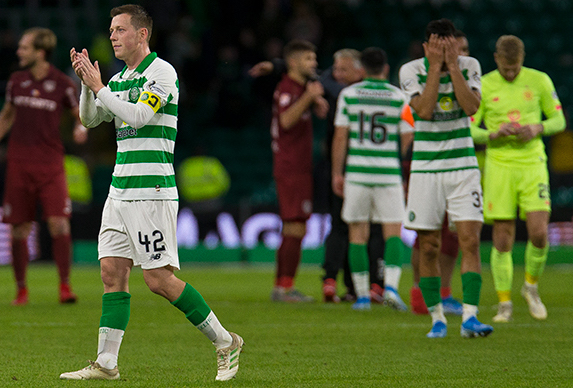 AIK prepared for the match with a shock league defeat from Kalmar at the weekend and skiipper Henok Goitom added: “Yes, Celtic are favourites because they win their league all the time and have experience in playing in the Champions League.

“We will be underdogs. But if they want to reach the group stages of the Europa League, they have to beat us first.

“I’ll be honest and say I’ve not seen Celtic yet. That’s not me being cocky, it’s just that I haven’t had the time to look at them. But if you ask me on Wednesday, I will know them very well indeed.

“Our defeat in the league might actually be a good thing. Maybe it’s good we got a punch in the face before we play Celtic.”

Celtic have lost three of their last five European ties in the east end of Glasgow with RB Salzburg, Valencia and Cluj all turning over the Scottish title kings.

And the team have not had a shut-out since walloping St Johnstone 7-0 in the Premiership opener which has been followed by Cluj 1-1 away, Motherwell 5-2, Cluj 3-4 home and Dunfermline 2-1.