Celtic Quick News on News Now
You are at:Home»Latest News»‘WE WON’T EVER GIVE UP,’ SINCLAIR
By CQN Magazine on 4th February 2019 Latest News

SCOTT SINCLAIR is adamant Celtic can overcome the setbacks as the injury toll mounts before the midweek visit of Hibs to Parkhead.

The Hoops overcame St Johnstone 2-0 at McDiarmid Park yesterday to restore their six-point advantage at the Premiership pinnacle – but it came at a cost.

Odsonne Edouard was stretchered off only minutes after coming on as a second-half substitute following a nasty kick on the instep from Perth defender Joe Shaughnessy.

James Forrest disappeared up the tunnel with what looks like being a hamstring injury only minutes after giving Brendan Rodgers’ side the lead.

Swedish international right-back Mikael Lustig was unable to come out for the second-half which allowed on-loan Borussia Dortmund defender Jeremy Toljan to make his first appearance for the team.

Ryan Christie, who was on the receiving end of some severe challenge from the Saints players, could barely walk at the full-time whistle.

And Rodgers will also be without central defender Kristoffer Ajer following his stoppage-time red card for hauling back Callum Hendry after an inexplicable loss of concentration from the Norwegian international. 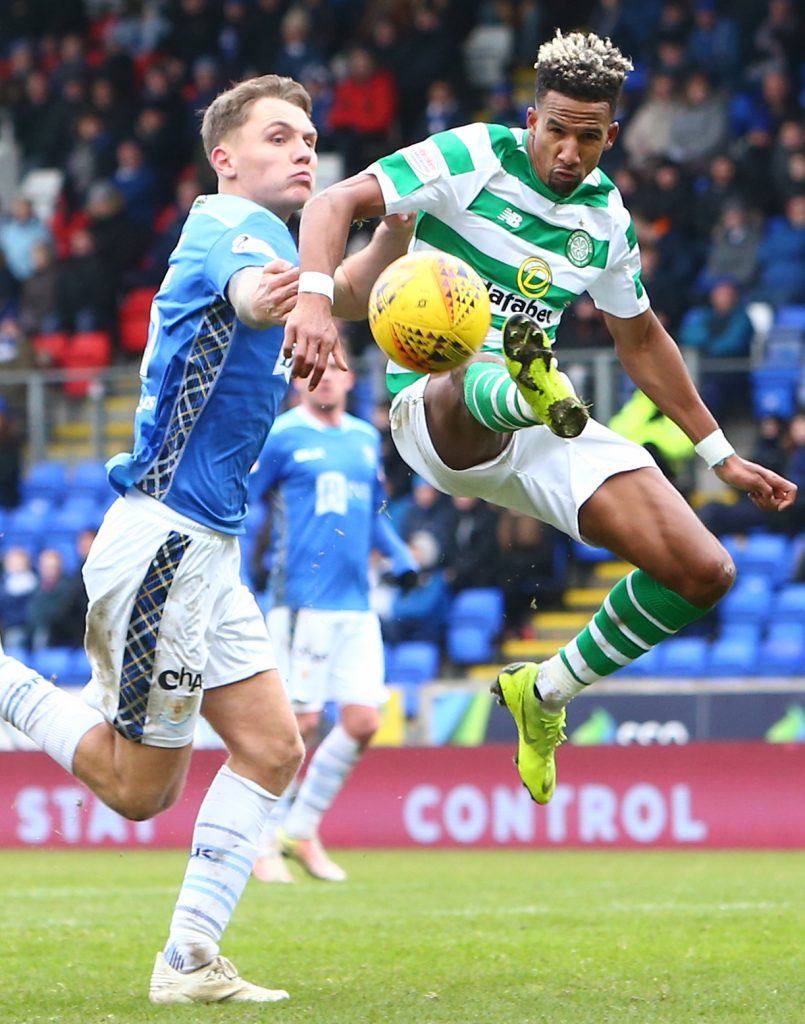 FLYING HIGH…Scott Sinclair takes to the air to display his skills to a mesmerised Jason Kerr. Pic: Geo.

However, Sinclair, who played a major role in the second killer goal claimed by substitute Timothy Weah, remains undaunted.

The English raider said: “I think we have showed that we have been able to cope with adversity.

“We have players here who are always willing to put their bodies on the line and play for the jersey. So, we know that whoever comes in, they will give their all for the team.

“It is frustrating for some of the guys, especially the like of Odsonne who has just got back fit, but it is just football, as difficult as it can be. But, hopefully, they will all be back as soon as possible and we won’t allow it to take away from what we need to do.

“There was pressure on us going up to Perth knowing that we had to win and there will be pressure against on Wednesday night, but I think we have always shown that we can respond and deal with that.”

Sinclair also applauded the contribution of 18-year-old American international Weah who claimed his third goal for the Hoops.

The 29-year-old attacker said: “He can’t do much more than that. He came on and helped us to open up the game and I think he is is loving it just now.

“He has worked hard since he arrived and has fitted straight in. Hopefully, there will be a few more to come from him between now and the end of the season.”

Sinclair added: “I don’t think anyone could question our desire. I think you saw that with our second-half performance.

“The manager has told us we might need to be patient, but we knew that we would get chances.

“What you saw was a team who always want to win. We won’t ever give up and we are a team who will play until the very last whistle.

“We always have that desire and commitment. We wanted to keep up the recent run of results and we are delighted that we have done that.

“It was also another clean sheet that helps us, so it is a real team performance. We just want to keep it going now and that means making sure that we go into the Hibs game with the same mentality.

“We never take anything for granted. We work for everything and we’ll look to keep our momentum going on Wednesday night, no matter who it is who starts the game.”