JIMMY JOHNSTONE was a formidable foe when he had a point to prove.

Celtic’s Great-Ever Player, who sadly passed away on this day in 2006 at the age of 61, was unstopppable when he was in the mood.

In his book, ‘The Lisbon Lions: The 40th Anniversary’, author Alex Gordon reveals the tale of how Wee Jinky got his own back on some poor unfortunate who had incurred his wrath.

WHEN Jimmy Johnstone had his dander up he was just about unstoppable. Those truly astounding, spectacular serpentine-weaving runs had to be seen to be believed.

England and Liverpool captain Emlyn Hughes once complained of having “twisted blood” after facing the Wee Man in an international at Hampden Park in 1974 as Scotland triumphed 2-0.

Jinky, as his team-mates were only too well aware, was a highly temperamental bloke and you upset him at your peril. Scotland trainer Walter McCrae couldn’t have been too aware of that side of the Celtic great as he prepared the international squad for an important game against England in 1968, the year after the Scots had overcome the world champions 3-2 at Wembley.

A victory was a must at Hampden for the Scots, but it was going to be achieved without the help of Scotland’s most skilful player, Jimmy Johnstone. Injury had prevented him from playing at Wembley in 1967 and, on this occasion, the international manager, Bobby Brown, had made up his mind to go with Chelsea’s Charlie Cooke in preference to the Celt.

READY FOR ACTION…Jimmy Johnstone emerges from the Parkhead tunnel.

The blissfully unaware McCrae then conjured up his outstanding faux pas as Scotland trained at their HQ at Largs. As luck would have it, Celtic were along the Ayrshire coast at their usual haunt at Seamill at the same time. The SFA asked for permission to play Celtic in a bounce game against the international line-up as a special training session.

The Parkhead powers-that-be agreed, but Jimmy was far from happy. “I’m no’ interested,” he said. “I’m no’ playing.” However, the Wee Man dutifully turned up to watch the session and McCrae then, unintentionally, made one of football’s great blunders – he asked Jinky to be a linesman!

Tommy Gemmell, with the Scottish squad, recalled at the time: “I think you could say Jimmy let Walter know he was not interested in running the line, in any shape or form. For a start, two of his best pals at Celtic at the time were Bobby Lennox and Willie O’Neill. They would have been taking part in the game and Jinky would have been running up and down the touchline with his wee flag. Jimmy Johnstone? A linesman? Oh, dear!

“The international game, which ended in a 1-1 draw, was played early in late February  and on March 2 Celtic turned up for a league match at Rugby Park to play Kilmarnock, where Walter McCrae doubled up as the club’s trainer.

“We hammered them 6-0 with, as I recall, Willie Wallace scoring four goals with others from Bobby Lennox and young substitute Jimmy Quinn. But everyone’s Man of the Match was, without question, Wee Jinky.

“The Wee Man looked fairly pleased with himself as we came off at the end. I was walking beside him when he spotted McCrae in the home dug-out. ‘No’ bad for an effin’ linesman, eh, Walter?’ beamed Jinky.”

Stories of Jimmy Johnstone are the stuff of legend. One of the greatest accolades Jinky earned, however, wasn’t at his beloved Paradise or even on these shores. On June 7, 1967, Celtic, still basking in the reflective glory of their excellent European Cup triumph, took the team to the Bernabeu Stadium to provide the opposition for the legendary Alfredo di Stefano. 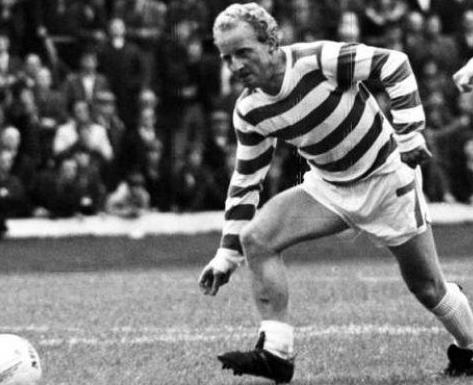 LORD OF THE WING…Jimmy Johnstone on the attack.

Just to be inviited to play in such exalted company in a game for one of the world’s greatest-ever footballers was an honour. To go to their fortress and win 1-0 while pulverising the opposition was quite unbelievable. Even the normally-hostile Spanish fans had to applaud Celtic that balmy evening.

“Ole! Ole!” was the cry that rang round the stadium, but it wasn’t a Real Madrid performer being showered with praise. The standing ovations that night were for Jimmy Johnstone. He was unstoppable – a 5ft 4in bundle of mischief and magic that bewildered a Spanish rearguard that wasn’t too used to being taken apart, especially in front of their own support.

However, Johnstone never embraced a great respect for reputations and he simply dismantled the line of defenders who were put in front of him that evening. It was a virtuoso performance that would have been more than fit to grace a World Cup Final. If Pele or Maradona or Cruyff or Best or even di Stefano had delivered such flamboyant entertainment it would have been hailed as the most outstanding individual display ever witnessed. “It really was that good,” added Gemmell.

Forget that this was labelled a Testimonial Match. Real Madrid had won the European Cup the previous year, beating Partizan Belgrade 2-1. They wanted to let everyone know they were still the true rulers of all they surveyed. In their minds, they were still the best in Europe and not a bunch of upstarts from Glasgow. 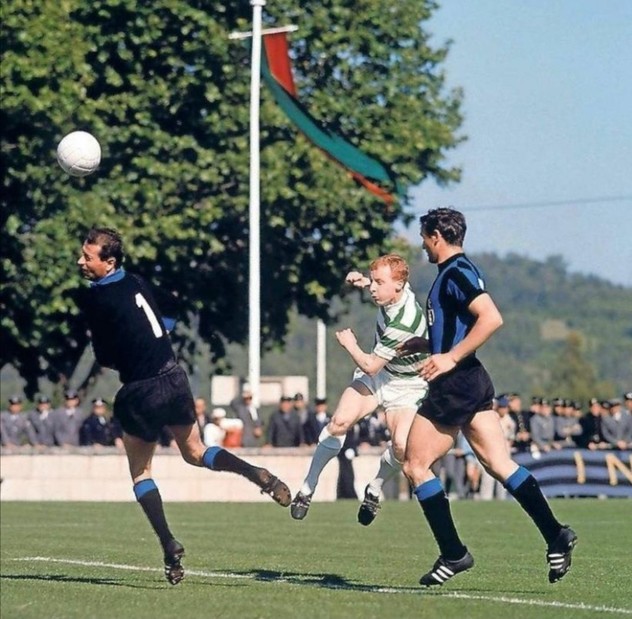 VOLLEY GOOD SHOW…Jimmy Johnstone fires in an effort as he is confronted by Inter Milan keeper Giuliano Sarti in Lisbon.

Real gave it their best shot, but Johnstone and Co were not to be denied another moment of glory. They, too, were at the Bernabeu to win and they did just that when Bobby Lennox flashed a low drive into the net from 12 yards after a sublime pass from, you’ve guessed, Jimmy Johnstone.

Jim Craig recalled: “I still laugh at the memory of Jinky the morning after we had played Real Madrid. He had arranged to go on holiday with his wife Agnes right after that game.

“Jinky could do no wrong that night and I well remember a Real Madrid defender, Grosso, I think, came racing out of defence in an effort to clatter the Wee Man. He had had enough of Jinky’s one-man show and he was going to sort him out.

“Yes, he did wallop Jimmy, but if he thought that was the end of Jinky’s meanderings that night he was so wrong. I recall him trotting back into defence, thinking to himself: ‘That takes care of that.’ His face was a picture, though, when he looked over his shoulder to see the Wee Man bouncing back to his feet to take the free-kick. I suppose he thought his opponent would fold under such treatment, but he didn’t know our Jimmy Johnstone.

“The following day, Wee Jinky was in good form as he prepared to go on holiday. I helped him down with the suitcases and he and Agnes jumped into the waiting taxi. I had assumed he was going to the airport, but I heard him say: ‘Benidorm, driver!’

“The taxi driver almost fainted. Possibly geography wasn’t one of Jinky’s strong points, but from Madrid to the holiday resort it was about 300 miles as the crow flies. Some hire!”

His great friend Bobby Lennox added: “Jinks was the man. He had a special gift and he worked on that gift. He had all the talents in the world, but he also trained hard to make sure his fitness levels were high.

“Stanley Matthews, the legendary Stoke City and England outside-right, and Real Madrid’s Alfredo di Stefano were two of his particular favourite players as he grew up. He bought a book by Matthews on how to play on the wing. He must have absorbed everything and added a few chapters of his own unique skills.

“And it gave him great pleasure to be with the Celtic team that played in Di Stefano’s Testimonial Match shortly after we won the European Cup. The Wee Man was unbelievable that night.

“He always knew how to rise to the occasion.”