AEK ATHENS boss Marinos Ouzounidis has ordered the team’s fans to ‘welcome Celtic to hell’ in the Champions League qualifier at the Olympic Stadium on Tuesday.

Brendan Rodgers takes his troops to Greece for the second leg of their tie after drawing 1-1 at Parkhead during the week.

And Ouzounidis wants the Hoops to be greeted by a wall of noise from the AEK followers as he plots a place in the play-offs.

He said: “I think qualification depends on us. We have a great opponent facing us, but we have proved we are a very good team, too.

“And I am asking for the help of all friends of AEK.

“I know it’s not a great time of year because many families are on their holiday and the league hasn’t yet started, but I want everyone to come out and cheer us on. 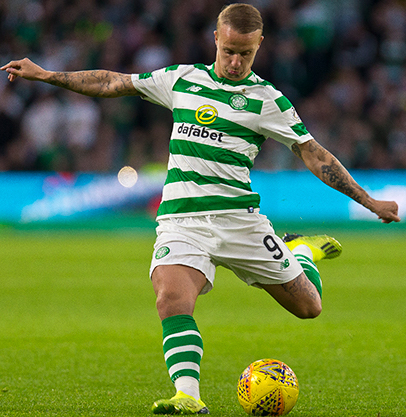 LEIGH GRIFFITHS…came on a substitute against AEK in the first leg.

“We need the passion, support and intensity of our supporters.

“The ‘Welcome to Hell’ message is used a lot, but this time I would really like it to be true when we face Celtic.

“We are a young team and it would make a huge difference to the confidence of some of the youngsters if they were playing in front of a full stadium.

“We are a long way from qualifying. We will have to work even harder than we did in Scotland.

“But I am optimistic. I believe in my team. Celtic’s away form is not anything like as good as their home form. We have a real chance of advancing.

“And that’s why I want our fans to be the 12th man and cheer us to victory.”