The Irishman reflected on the mauling from the champions – with Leigh Griffiths and Callum McGregor also on the scoresheet – and admitted the experience for his players “was a horrible one for some of them.”

Robinson, though, couldn’t disguise he admiration of the Hoops’ top scorer who took this season’s tally to 24 with his two-goal salvo against the Lanarkshire outfit.

The Well boss, speaking to the Daily Record, said: “Edouard is arguably the best player in the league and is unplayable at times. It creates gaps and they punish you.

“He’s an excellent player. That’s what you get for £10million.

“It’s very difficult. After a very good first-half, we never took our chances. You have to take them. They got a ricochet for the first goal after we lost it. Second goal there was a heavy touch and with the quality they have they punished us.

“They were ruthless and you just had to admire some of their quality. What I’ll take out of it is a good performance for the first-half. But am I happy with that? No. We deserved to be beat by four because they punished us and that’s the level. 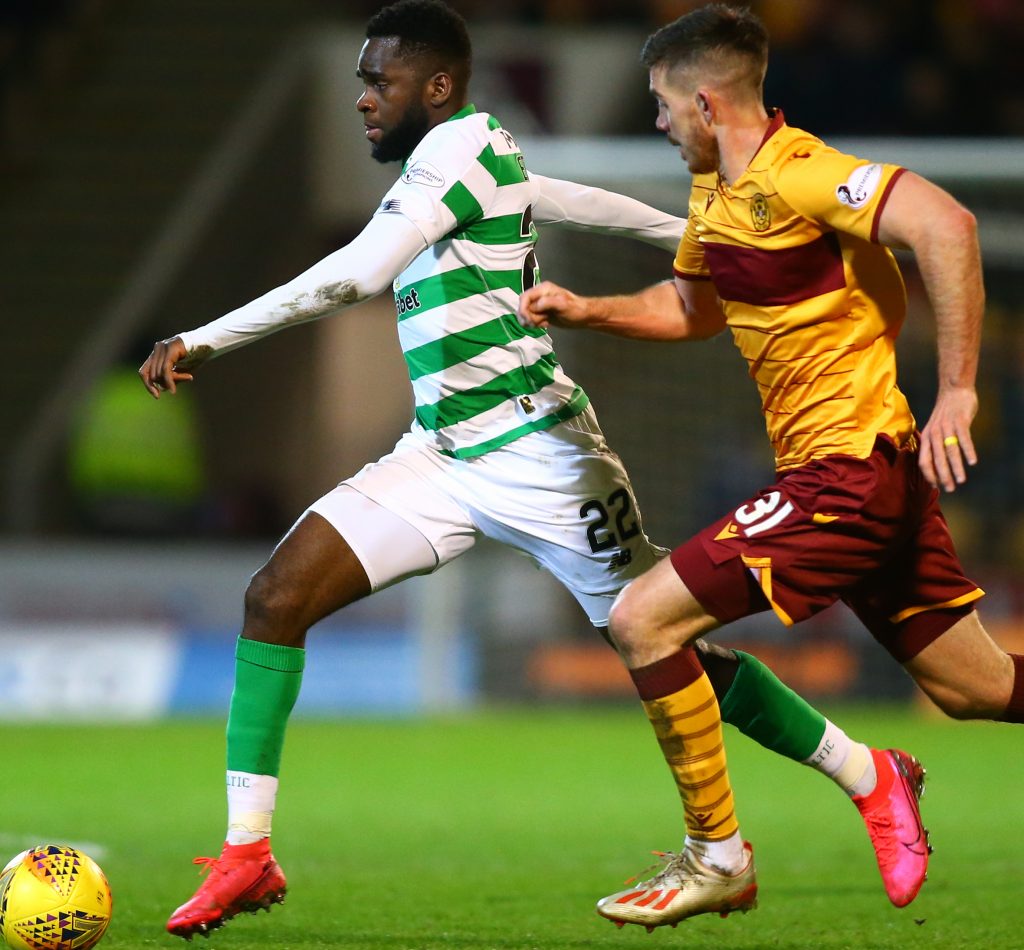 ON THE RUN…Odsonne Edouard strides away from Well centre-back Declan Gallagher.

“I set out to win. I go and press. I don’t try to contain because ultimately they break it down, anyway. They’re young boys and they’ll make mistakes.

“We’re a small club massively overachieving. We’ll get criticism as we’ve lost twice, but I know what levels we’re trying to get to. I have young boys developing all the time.

“We’re third in February with four games including one which could get us into the quarter-finals of the Cup and stay where we are in the league.

We’re having a good season. There were very good points in that game.”

Robinson also highlighted the quality counterpart Neil Lennon had at his disposal on his substitutes’ bench.

He added: “Neil was able to bring on quality performers such as Ryan Christie and Tom Rogic as well as Patryk Klimala, a player who cost them £3.5million.

“It’s difficult to deal with that.”

The Polish frontman made his third cameo appearance after coming on in the games against Partick Thistle and St Johnstone.

Lennon has admitted he is contemplating changes to his line-up for the Scottish Cup-tie against Clyde on the artificial surface at Broadwood on Sunday.

Klimala must be in with a chance of facing the League One part-timers while Griffiths is likely to continue to get game-time.

The good news for Clyde is that Edouard may be allowed a day of rest.

CELTIC TO THE FOUR