BRENDAN RODGERS reckons game-time will prove crucial when Celtic meet Rosenborg in the Europa League Group B match at Parkhead on Thursday night.

The Hoops boss insists there will now be a more level playing field when the Norwegians arrive in Glasgow where they lost 3-1 in a Champions League qualifier in July.

The Scottish domestic season hadn’t kicked off at that stage while Rosenborg had played several competitive league games.

Now the Irishman’s side have had five Premiership outings, one tie in the Betfred League Cup and eight European confrontations.

They are well up to speed and Rodgers is planning for them to hit the ground running against dangerous opponents.

He said: “It will certainly help us if you think about how early we would normally play them.

“To then be a couple of months down the line will, hopefully, work in our favour.

“We know their style and that doesn’t change. They are a good side with some good players. It was unstable there with the manager leaving, but winning games can always change that.” 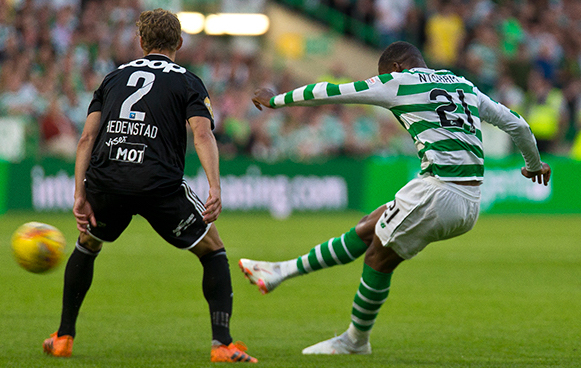 FRENCH FANCY…Olivier Ntcham scores with a spectacular effort against Rosenborg in July.

Despite the disappointment of not reaching a third successive stint in the elite tournament, Rodgers is determined to give the Celtic fans European football beyond Christmas again.

He said: “The competition itself deserves the respect. Every team would love to be in the Champions League, but this year we aren’t.

“Our objective again will be to have European football after Christmas.

“There is an opportunity there, though it is still tough in the modern climate. When you think of the level of opponent we’ve had in the Champions League, they’ve been the world’s best.

“But we play Leipzig and they reached the quarter-final last year. We lost to Zenit St Petersburg and then Leipzig beat Zenit.

“Both those Red Bull clubs have been on a journey, so they will be tough games for us as well as Rosenborg.

“The level isn’t the same as Bayern Munich, but it doesn’t make it any less formidable an opponent.”

The Norwegians take on ex-Celtic boss Ronny Deila’s Deila’s Valerenga in the Tippeligaen this afternoon and are leading the league after 21 games.

They have won eight and drawn one since their qualifier with the Hoops and Rodgers will have backroom staff at the match for an up-to-date form report.

He added: “Ronny is always there if we need (more information). I spoke to Ronny when I first came in here and he visited for one of the games.

“If I think there is any need, or a drastic change in anything, we would do that.”