Celtic Quick News on News Now
You are at:Home»Football Matters»‘WE’RE TRYING TO TAKE A DIFFERENT PATH,’ RODGERS
By CQN Magazine on 28th April 2017 Football Matters
BRENDAN RODGERS was delighted Celtic’s Under-17 side beat their Ibrox counterparts 2-1 in the Glasgow Cup Final at Firhill last week.
But the Hoops branded the standard as “awful” and claimed it was a “poor” game.
In midweek, the Parkhead Under-20s defeated Sevco Rangers 3-0 in the Scottish Youth Cup Final at Hampden.
Rodgers enthused about the performances of a number of the youngsters and declared 6ft 7in keeper Conor Hazard had a “big future”, compared full-back Anthony Ralston to Danny McGrain and rated forward Mikey Johnston as a “real big talent”.
However, the Irishman wasn’t in the same complimentary mode when he talked about the previous youths’ game. 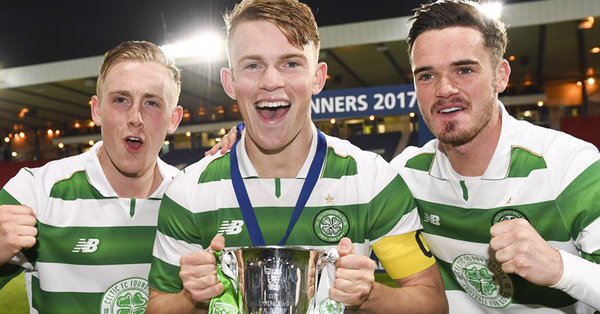 He said: “The Under-17s final was a poor game. In terms of Scottish football, the standard was awful.

“There were some good players in both teams and our kids won, which was great, and there were two or three moments of quality.

“But the overall level of quality wasn’t good. I have seen some good kids up here and it’s a good level. But they would have to play better football than that.

“The Under-20s the other night was a good game. They showed good tactical awareness and played at a good level, in terms of speed, organisation with their pressing, they got the ball back quickly and were fast getting forward. It was good.

“The progress will come with the 17s, but we need to influence it even further down to eventually produce it at the top level.
“There’s a big difference if you want to produce players for Scotland that allows the national team to do well.

“I’m new here but it’s my job to help. We have brilliant coaches here at youth level with Chris McCart overseeing it, Tam McIntyre and Michael O’Halloran with the 17s, their assistants, they have great enthusiasm and energy.

“But we’re trying to take a different path.”

VERY FEW T-SHIRTS REMAINING! ORDER TODAY TO ENSURE YOU HAVE YOURS FOR MAY 2017 CELEBRATIONS! – www.cqnbookstore.com