Celtic Quick News on News Now
You are at:Home»Latest News»‘WE’RE WORTHY CHAMPIONS,’ GRIFFITHS
By CQN Magazine on 1st May 2016 Latest News
LETHAL Leigh Griffiths admits Celtic have not been consistently at their best this season.
But the 39-goal hitman says no-one can deny the Hoops fully deserve to be crowned Premiership champions for the fifth successive season. 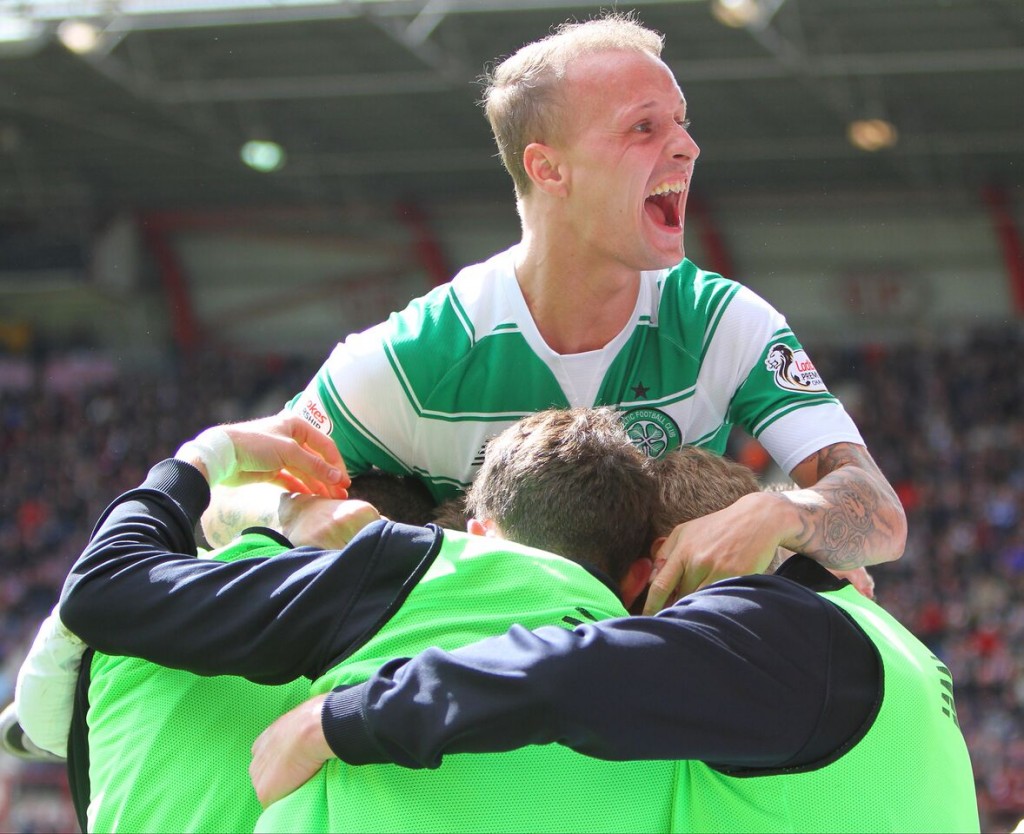 The striker rattled in the killer third goal in the 3-1 win over Hearts at Tynecastle yesterday as departing boss Ronny Deila and his players celebrated another title triumph.
Griffiths, 25, said: “Winning the league is always special, regardless of who scores the goals. The table doesn’t lie and we’re nine points clear of Aberdeen now.
“Over the course of the season, we haven’t played at our best at times, but we’ve dug in and got results. Whoever finishes at the top of the league are worthy champions.

“And this has been the best season  of my career so far. I’m thriving at the  minute and I love going out there, proving people wrong.

“I love scoring, helping my team get points and, ultimately, winning leagues.

“The manager, Ronny Deila, deserves this, as well. He’s been nothing but positive even when things haven’t gone our way this season. 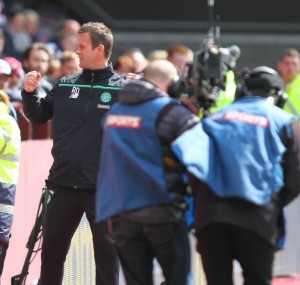 “He’s always tried to look on the bright side and we typified that against Hearts. We stuck together as a team and got the result we were looking for in the end.”

Griffiths was booked after a tussle with defender John Souttar just moments before he hammered home a trademark left-foot effort. The yellow card will mean he misses the first league game of the new season.
He added: “I don’t think there was a  better way to answer the caution than that.

“I asked the referee why I was booked and he said I was overly aggressive. But you can see on TV that he was the one grabbing me.

“But I was happy to move on, take the yellow card, nutmeg him, score a goal and get the three points. 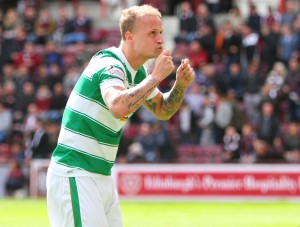 “We knew we had to come here and win – that was the most important thing.

“And I was pleased that Colin Kazim-Richards also scored. He’s put a lot of hard work in behind the scenes and he’s finally justifying his run in the team now.”

Patrick Roberts grabbed the other Celtic goal, with Abiola Dauda providing Hearts’ reply to make it 2-1 in the second-half.

At the end, Deila’s players and staff  celebrated with the away fans and they will pick up the Premiership trophy against  Motherwell at Parkhead on May 15.

————————————-
CELTIC legend Charlie Gallagher will be on Celtic Quick News on Monday evening from around 7.30pm to take part in a Q&A.
Charlie’s biography is out now on CQN Books. You can order your SIGNED copy HERE or by clicking on the link below. It is Father’s Day next month and a signed copy of Charlie Gallagher? What a Player! will make an idea gift!