MOVING from Fife to Midlothian felt like relocating to the other side of the world for a pit-man’s six-year-old son in 1985. It was all Margaret Thatcher’s fault of course and the defiant chants of, “Maggie, Maggie, Maggie! Out, out, out!” were still ringing in the ears of the many irreparably decimated families and communities who had braved the miner’s strike over almost twelve bleak and debilitating months.

The uncertainty of that penniless year of hand-me-down clothes and free school dinners had prompted my father to seek work elsewhere and, six months after returning underground, he moved his now-forever-politicised family lock, stock and barrel to Penicuik in Midlothian. As we left friends and family behind, my mother tried in vain to soften the blow by explaining that we would be staying close to a ski centre of all things. It felt like we were moving from one slippery slope to another. 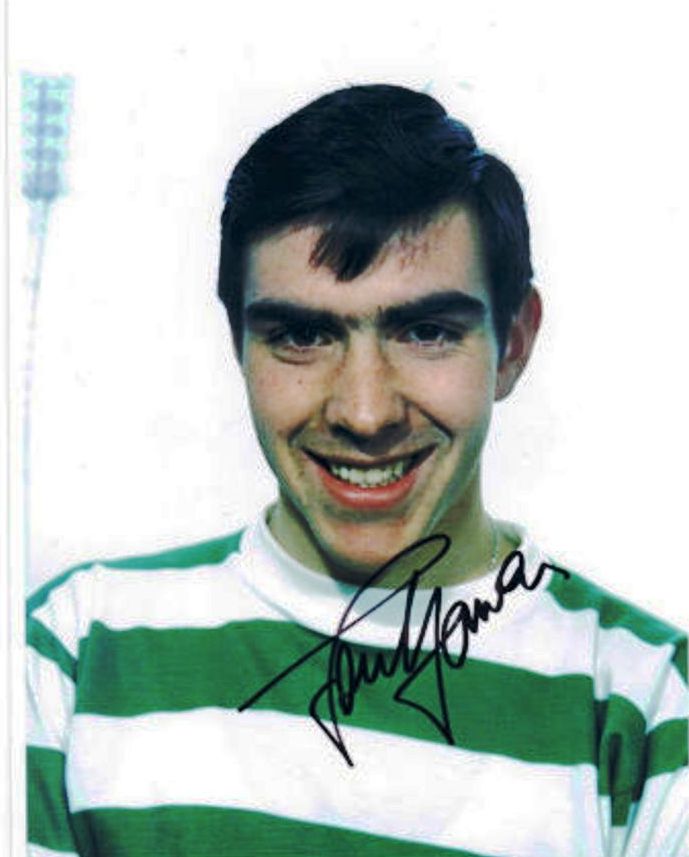 A new town, new school and no friends was the daunting prospect facing us and I vividly recall being taunted on my first day at Sacred Heart Primary School with chants of, “Glory glory to the Hibees,” and, “Hearts, Hearts, glorious Hearts,” in equal measure after it was discovered where my own allegiance lay. It was an unusual experience as Celtic and Rangers had, and have, a hold on the small Fife mining villages of my youth and the expletives that peppered my own impromptu riposte of “Hail Hail, the Celts are here,” resulted in an early audience with the Hibs-supporting headmaster.
CATHOLIC
Suitably castigated, I finally made it to class where I was met by Miss Gorman, a strict disciplinarian of devout Catholic faith and exacting standards. Keen to ensure her that I was no purveyor of schoolyard anarchy, I immediately apologised for my foul language but stuck to my guns on the chants of “Hail Hail.” Surprisingly, her icy gaze softened momentarily as she explained that I was right to be proud of my football team but I was to be in no doubt that she would not tolerate such a course turn of phrase from one of her pupils.
As the weeks passed and I settled into my new environment, Miss Gorman never pulled me up for continuing to wear my Celtic bar scarf and gloves in the schoolyard. The ‘Cabbage’ and ‘Jambos’ fans had strengthened my resolve and perhaps she admired my unstinting loyalty to what I realised was a shared ethos. The 1960s Celtic programmes and photos that she later brought in to show me were an unexpected treat however, and I was enraptured when she explained that her cousin, John, had played in the same Celtic team as Kenny Dalglish.
Miss Gorman described how John could play in the left-back role or as sweeper and that he had first gone to Celtic Park as a player aged just 13 in 1963. Two years later, Gorman was on the groundstaff after being signed by Jimmy McGrory. He had even been taken to the European Cup final with the club in 1967 by Jock Stein.
They don’t normally teach you this stuff at school.
Life at Sacred Heart didn’t seem so bad after this revelation and Miss Gorman never tired of my endless questions on Jock Stein and the Lisbon Lions. It was a middle ground that helped me through an early transition in life and one I was to use 25 years later when attempting to track down the much-travelled John Gorman.
QUALITY STREET
Official media requests to football clubs can often fall on deaf ears, much to the frustration of this interview-hunter on the trail of a 40-year-old story. MK Dons had received at least half-a-dozen of these professionally-bland emails from me before I finally changed tact. A hand-written letter described my 1980s affinity with Gorman’s cousin and within a couple of days The Quality Street Gang’s left-back called me on my mobile. The first thing that struck me about Gorman was his continued love of Celtic Football Club and his lasting regret that he didn’t play hundreds of games in the green-and-white hoops like his contemporaries Dalglish, McGrain, Hay and Connelly.
His affection for those days with his Quality Street alumni immediately spilled out into our conversation as he looked back on the youth trip to Italy in 1968 with nothing but fondness. “The best memory was when we all stole the bikes,” John explained. “There we were representing Celtic but we couldn’t resist jumping on these bikes and we didn’t know where we were going. There were about six of us just driving about, although we didn’t really steal them because we put them back.
“Wee Lou used to slaughter me and say that I cost them the junior European Cup because we were playing against Juventus and I was playing sweeper that day and I dropped my shoulder on the 18-yard line and one of their players took it off me and scored the only goal of the game and put us out. We were playing really well and I got player of the game in the match before that, but in that game I cost us. George Connelly was the most talented. He could pass the ball sixty yards. He could have been the greatest for Celtic. When you look at that team now, you’d have to say that George was the best. We were so good, we went down and beat Carlisle’s first team 5-2. Our reserve team used to go out there and beat everybody. Our little group was Davie Cattanach, George Connelly, Davie Hay, Jimmy Quinn and me. That was our little clique. We were part of the family. From that group, Davie Hay and I became best friends and we’ve been good friends since then.”
JOCK STEIN
The quality of that Casale Monferatto squad was an early indication that Jock Stein was building yet another home-grown side on the muddy trenches of Barrowfield. A team that he hoped would emulate the greatest of them all. The reserves started the 1968-69 season with victory over Rangers, winning 2-1 in a Reserve League Cup match. Sean Fallon had the luxury of having the goal-scoring prowess of Joe McBride at his disposal as the striker’s convalescence continued in the second-string. McBride scored both goals in a youthful side which also featured the experience of Charlie Gallagher, Jim Craig and Stevie Chalmers. Fallon’s post-match musings in the Celtic View made particular mention of his 18-year-old left-back. “I have been impressed this season by the displays of young John Gorman, fresh from our groundstaff. John is playing well and learning a lot from experienced campaigner Jim Craig at right-back. Goalkeeper Bobby Wraith has the confidence and ability to make a big name for himself on the football field. Almost any player could walk into our first-team and make a solid contribution.” 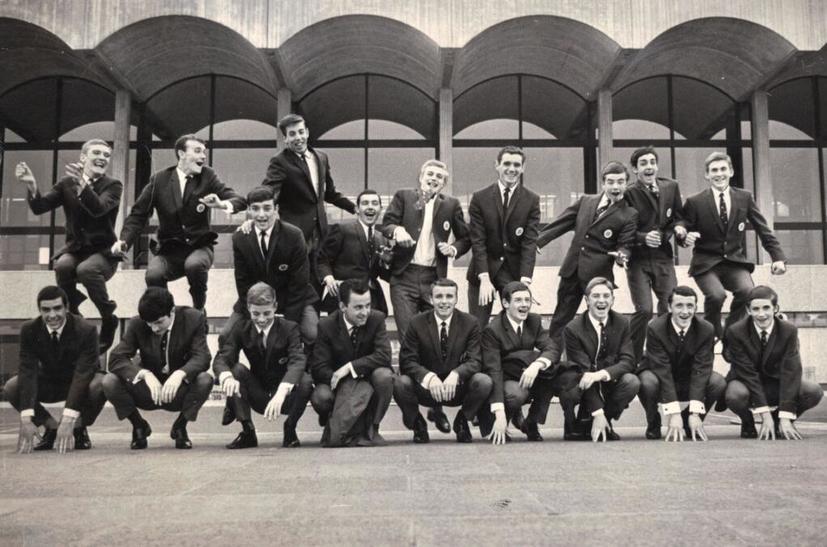 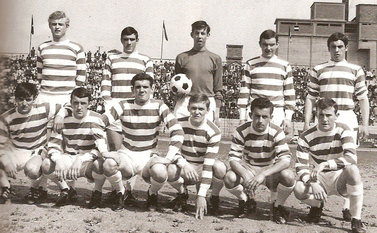 There is a suggestion that Gorman’s stature may well have been a deciding factor as Stein’s attention to detail prevented him from playing two small full-backs in his first-team, and Danny McGrain looked to be a cert for the right-back berth. Ward White believed that John Gorman should have been retained and utilised by Celtic despite his lack of inches. White said: “I think that was the biggest mistake Stein made, getting rid of John Gorman. He didn’t like any player to go anywhere and be a success. I mean if they’re going to go anywhere and fail then that’s alright but don’t go and be a success. John went to Carlisle and did well and got moved to Tottenham Hotspur. He wasn’t big and I heard that Stein rated Danny McGrain and John on a par at that time, but Gorman was quite a wee bit smaller than Danny.”
DAVIE HAY
Davie Hay has been a close friend of John Gorman’s since their earliest says at Celtic Park. Hay highlights the huge amount of players Celtic had in his position, which prevented the Winchburgh left-back from progressing beyond the reserves. “What happened at that time was that, even before I broke through there was Jim Craig and Tommy Gemmell as the full-backs so as a youngster you’re saying, ‘How can I break into a team that’s won the European Cup? As well as John Gorman you also had Willie O’Neill, Danny McGrain and I could play left-back as well. Celtic were maybe spoiled for choice and an opportunity came when Carlisle made a bid, big Jock accepted it and then John later went up to Tottenham. John had a sweet left peg, he started as a winger and moved back, but there’s no reason to say that if he hadn’t moved that he wouldn’t have broken into the first-team. Unfortunately he didn’t and I think he only played one or two games.”
John Gorman was regarded by many of his teammates as the one that got away. He moved to Carlisle and then on to Tottenham Hotspur, where he met a player who would become a great life-long friend: Glenn Hoddle. Gorman moved to the States and played for a number of clubs in the North American Soccer League and the Major Indoor Soccer League. Whilst in America, he was able to enjoy his twin passions of football and art as he provided illustrations for the Tampa Bay Rowdies match programmes and Annual Calendar and his artwork proved almost as good as his footwork. Gorman returned to England in 1986 to take over as Gillingham youth and reserve team coach and he even turned out once for the first-team alongside Tony Cascarino at the age of 37. Gorman then joined his old Spurs friend, Glenn Hoddle, as his assistant at Swindon Town and then took over the manager’s role when Hoddle moved to Chelsea. Whilst in charge of Swindon, Gorman’s Quality Street mate, Davie Hay, joined him as his assistant and the pair signed Frank McAvennie on loan for a spell in the Premiership. Gorman’s next position was as assistant again to Hoddle for England, and the pair led them to the World Cup finals in 1998 where he would work with another great bunch of kids called ‘Fergie’s Fledglings’. Various other managerial and coaching positions followed with such clubs as West Brom, Wycombe, Gillingham, Northampton, Southampton, Ipswich, Queens Park Rangers, Tottenham Hotspur and MK Dons, where he narrowly missed out on promotion to the Championship in 2011.
John Gorman is now retired from football and lives a quiet life in Berkshire. Had he remained at Celtic for a few months longer then he would have been impossible to ignore as the club’s only recognised left-back. While his fellow full-back Danny McGrain is celebrated as an icon of world football, John Gorman will forever be recalled in the footnotes of our history as one who got away.
Written by Paul Dykes, author of The Quality Street Gang and Celtic’s Smiler The Neily Mochan Story both available from CQNBookstore.