CELTIC hero Chris Sutton could not resist a cheeky jibe at Steven Gerrard’s side after their Scottish Cup exit at Ibrox last night.

St Johnstone keeper Zander Clark was the hero as he inspired the Perth side to a quarter-final triumph and a place in tonight’s last-four draw.

The 6ft-plus shotstopper assisted the last-gasp equaliser before saving two penalty-kicks from James Tavernier and Kemar Roofe in the shoot-out. 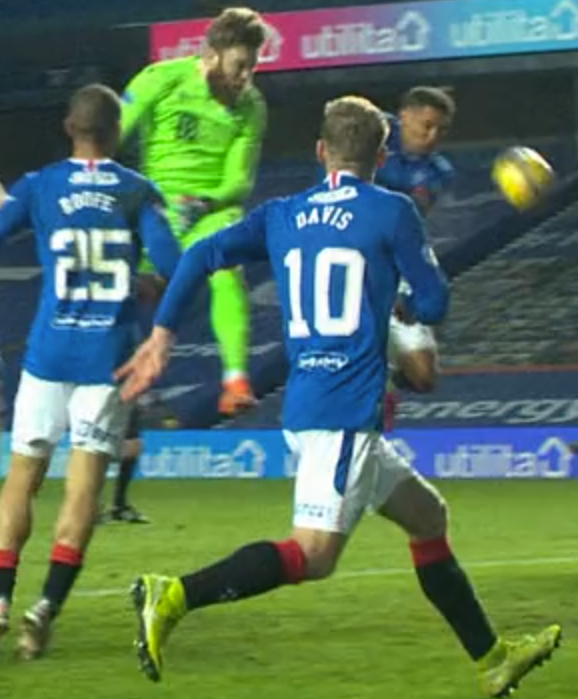 HIGH AND MIGHTY…Zander Clark glances a header towards the Ibrox net on the Perth side’s way to a Scottish Cup triumph.

With his side trailing 1-0, Clark joined the attack as Callum Davidson’s team earned a right-wing corner-kick in the fading moments. Remarkably, the towering netminder was left totally unguarded smack in front of goal as the ball swirled in bang on target.

He glanced the ball towards Allan McGregor’s right-hand corner and, at first glance, it looked as though he had claimed a dramatic leveller. However, TV cameras showed Chris Kane getting the final touch to divert the ball into the net.

Sutton had a pop at his former rivals’ expense and, quoting a tweet from Premier Sports that showed video footage of Clark’s stoppage-time heroics, said: “What’s the goalie doin, Tam…”

ONE…Moussa Dembele races onto the ball as Wes Foderingham is caught off his line.

TWO…Dembele’s lob is on its way with the keeper in no man’s land.

THREE…Dembele turns away in triumph as two rivals sit it out.

The media pundit was referencing the now famous commentary by Hugh Burns on RangersTV during a derby clash at Ibrox from 2018, where former keeper Wes Foderingham rushed out to try and deny Moussa Dembele – only for the French hitman to coolly lob the ball over his head.

It didn’t get much better for Burns or Foderingham in the second-half against a 10-man Celtic team following Jozo Simunovic’s red card.

Brendan Rodgers sent on Odsonne Edouard, a loanee from Paris Saint-Germain at that stage, and the youngster curled in the winner.