CELTIC author Alex Gordon takes a walk down memory lane as he pays a heartfelt tribute to a good friend who passed away yesterday at the age of 83.

BERTIE AULD paid me the highest compliment when he asked me to co-author his autobiography, entitled ‘A Bhoy Called Bertie‘, which was published in 2008.

I had been well aware several authors had contacted Bertie to put his life story into print, but this genuine Celtic legend had always politely declined and said: “I did all my talking on the pitch.”

And who could argue with that sentiment? 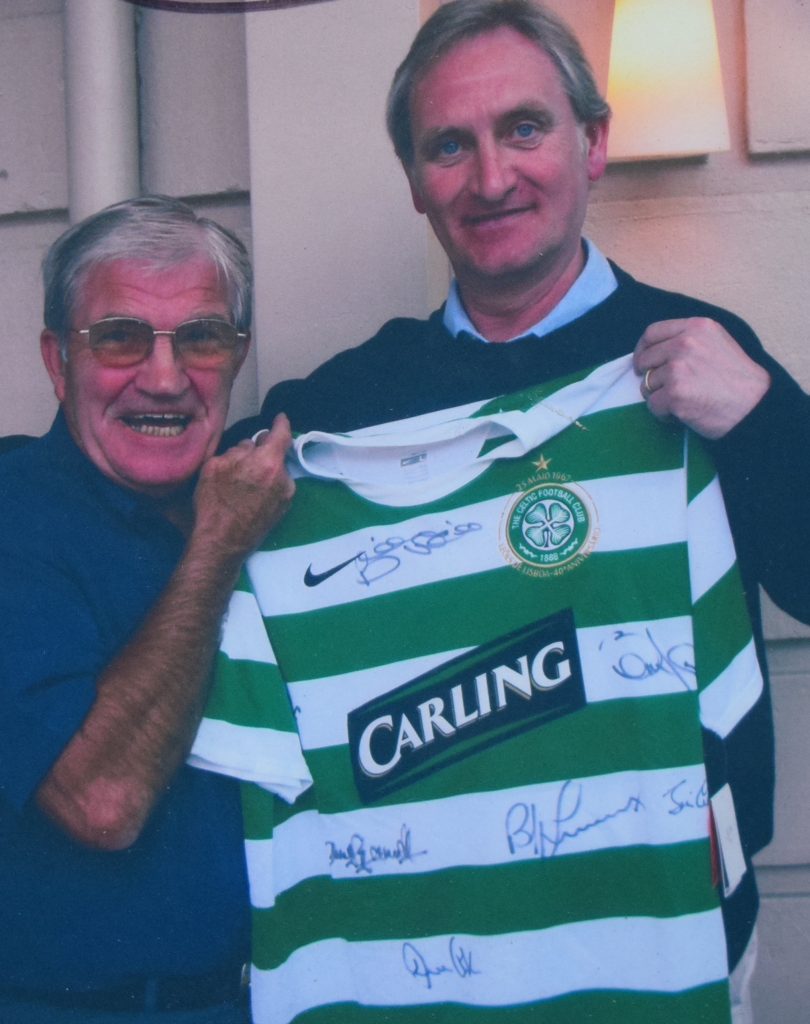 A GIFT FROM A GREAT…Bertie Auld presents author Alex Gordon with a Lisbon Lions signed top during his interviews for his autobiography, ‘A Bhoy Called Bertie’, which was published in 2008.

So, I was more than taken aback when Bertie pulled me aside one day after a lunch with Billy McNeill and Tommy Gemmell as I penned a few interviews for my tribute book to the 1967 European Cup-winning team, ‘Lisbon Lions: The 40th Anniversary Celebration‘.

We were walking along Bath Street, after a very convivial meeting in the old O Sole Mio restaurant, when he turned to me and said matter-of-factly: “How about writing my book?”

I was rather surprised because I realised he had stubbornly resisted all offers in the past. I didn’t hesitate. “I would be honoured to write your story,” I said. And the book was published about a year later.

Sometimes putting together a tome can be a bit of a chore. There is all sort of research and on occasions even an icon’s memory can play tricks. Everything has to be checked and rechecked. There is a lot of ground work to be put in place before you have a platform for a publication which will probably run to at least 100,000 words. 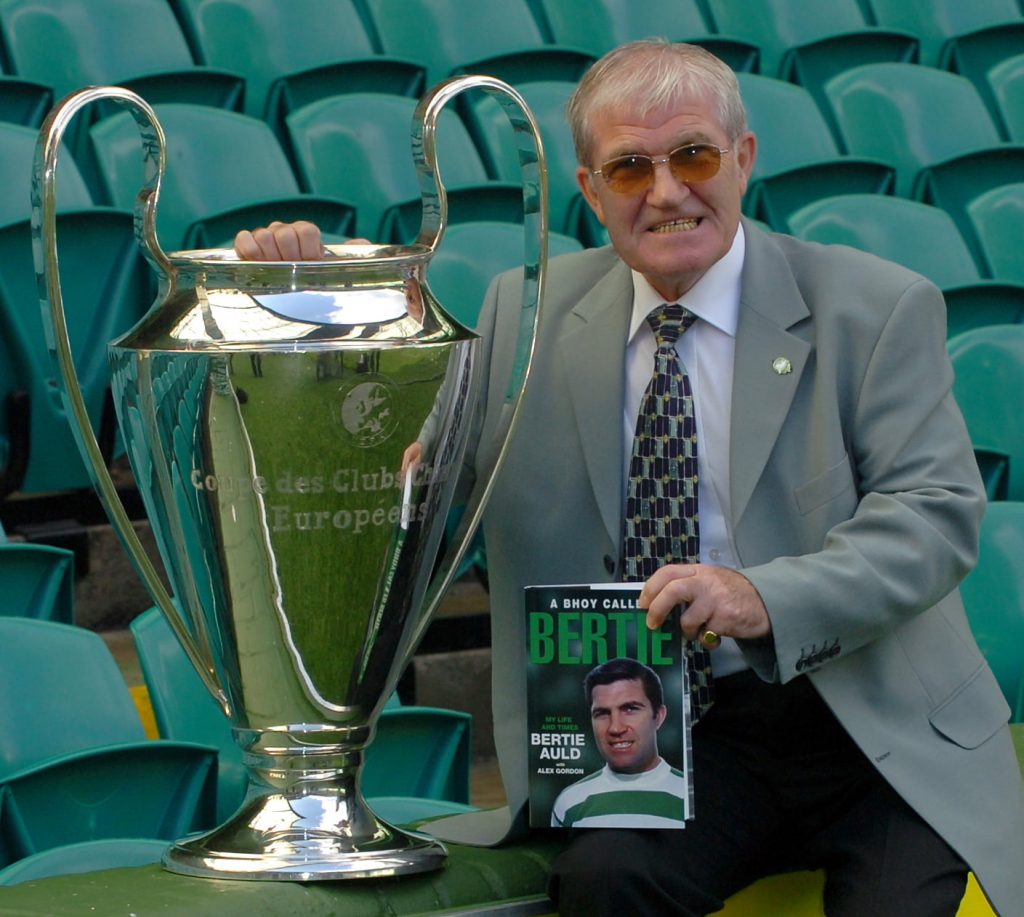 PRIZE GUY…Bertie Auld poses with the European Cup and his autobiography, ‘A Bhoy Called Bertie’.

I have to admit I was quite sad when I hit the final full stop on Bertie’s autobiography. Interviewing Bertie at least twice a week was something to relish and anticpate with eagerness. In short, it was a hoot meeting the Wee Man and work was almost an afterthought.

As we all know, Bertie was one of the most accessible of the Celtic greats; nothing was too much trouble for this wee chap from Maryhill. However, it can be problematic when fans are forming queues for selfies and autographs and the notebook remains bereft of words while Bertie meets and greets total strangers with his acknowledged warmth of character.

No-one got turned away.

I had to find a location where we could hide away and actually put a book together. We settled on the bar/restaurant at the Millennium Hotel just opposite George Square. It was fairly peaceful and tranquil in one of the establishment’s cosy corners. 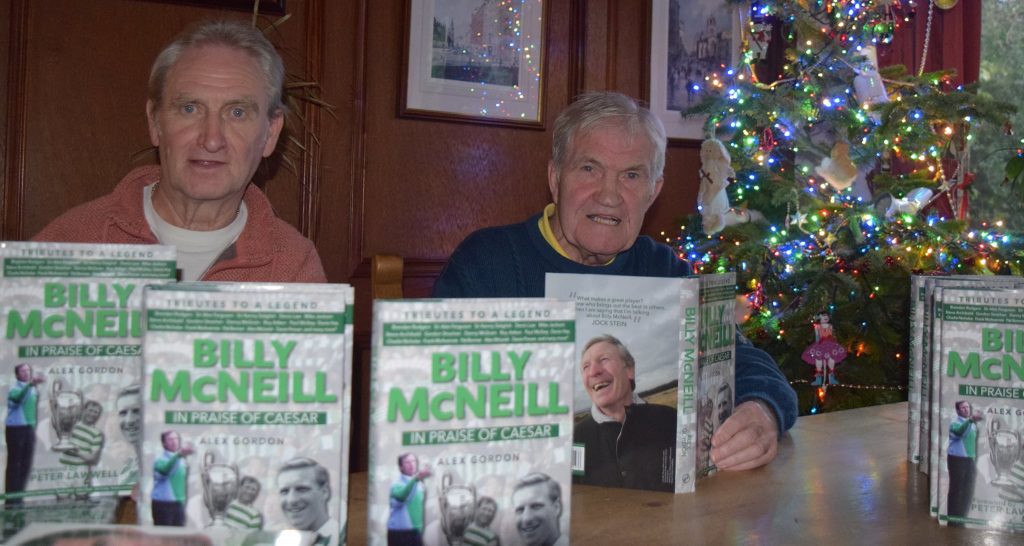 Bertie would often be accompanied by his lifelong friend Phil McAuley and my missus, Gerda, normally came along with me. On odd occasions we would have “guest stars” such as Tommy Gemmell, Davie Hay, Willie O’Neill and Chic Charnley popping in to shoot the breeze and possibly enjoy a snifter. A good time was had by all.

However, there was one sun-drenched summer’s day when our waitress moved our table in the eatery, right in front of massive ceiling-to-floor windows. And that was when Wee Bertie stopped the traffic in Glasgow city centre one day.

We were chatting and I was scribbling as usual when Gerda interrupted to tell Bertie someone had spotted him in the restaurant and was waving to catch his attention. Bertie looked out, smiled and returned the cheery wave. The only little complication was that the guy was driving a dumper truck. Once Our Hero had acknowledged the bloke, he drove off.

About five minutes later, he was back. And still driving the dumper truck which he brought to a halt in the road across from the hotel’s front window. He waved in again and, once again, Wee Bertie returned the gesture. And then the vehicle moved on. 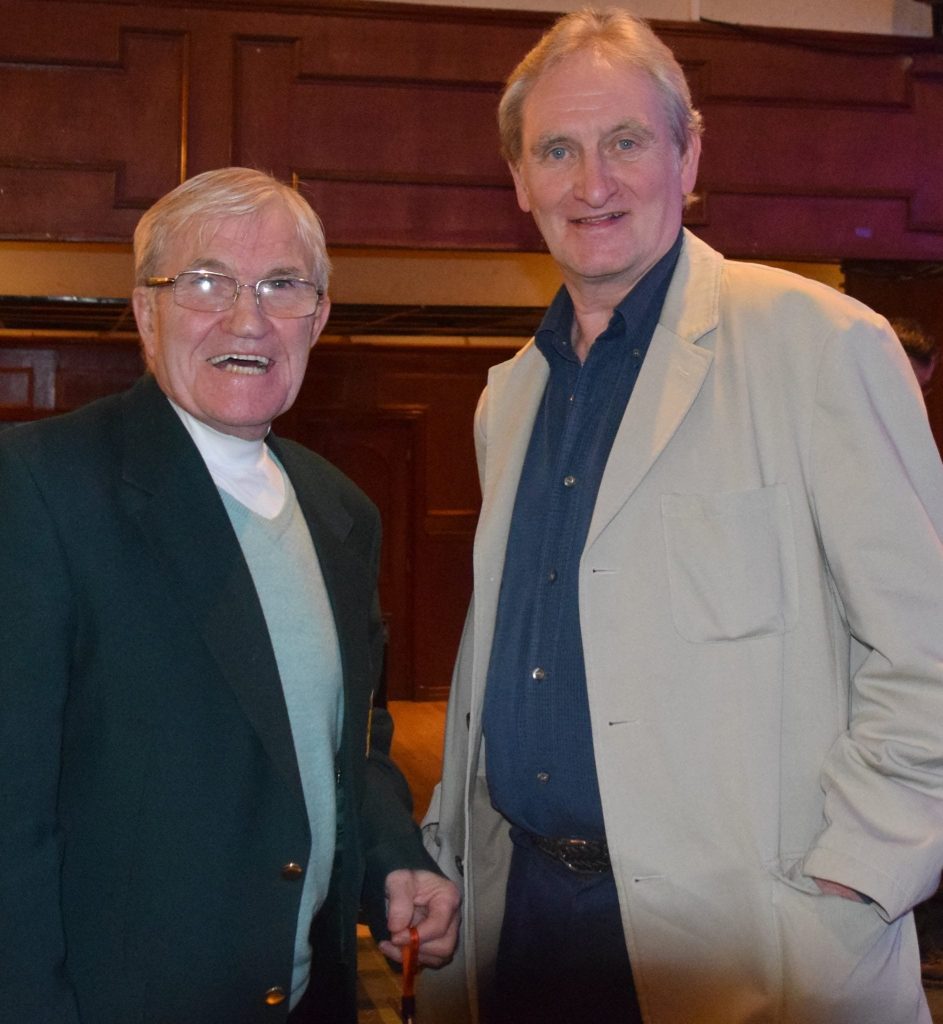 MY PAL BERTIE…Alex Gordon and Bertie Auld at a book launch three years ago.

You’ve guessed it. About five minutes later, our guy was back. This time accompanied by a cacophony of shrieking horns and wailing protests from frustrated bus drivers, taxis and cars as he awaited his now-expected gesture of recognition from Wee Bertie.

Only a certain calibre of character could bring rush-hour traffic to a standstill in a busy, chaotic city centre.

Bertie Auld was exceptional in every way.

I lost a treasured friend yesterday.

In fact, I think we all had something irreplaceable taken from us.

It’s all a bit raw at the moment, but the interval will not be too long until I will be able to look back at time spent with Wee Bertie and my heart will be uplifted at the many cheery reminisces.

I can only thank God for the day he chose me to write his life story.

Rest In Peace, my wee pal.