EWAN HENDERSON won the Man of the Match award on his dream debut in Celtic’s 4-1 triumph over Motherwell at Parkhead on Sunday.

However, the impressive 18-year-old midfielder realises his reward could be the AXE for tomorrow night’s crucial Premiership encounter against Hearts at Tynecastle.

It’s another game towards the club’s bid for eight titles in a row and it’s also a ground where the champions lost 1-0 earlier in the campaign.

Brendan Rodgers is likely to go for tried and trusted first-teamers on an evening where he will plan for the Hoops to remain eight points clear at the top of the Premiership.

Henderson understands the situation and, speaking in today’s Evening Times, said: “I thought I had done well, but you can always do better, so I really don’t want to get too ahead of myself. 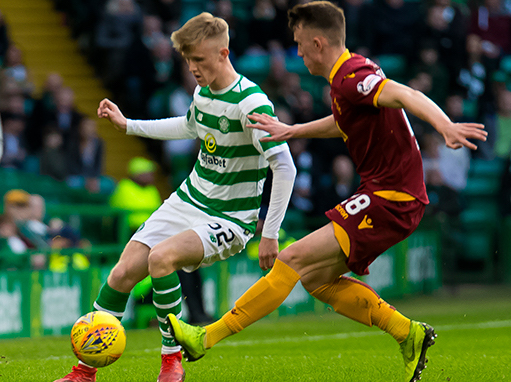 “I just need to keep my head down and keep working hard in training. It is about working and listening and just trying to impress the manager.

“After the game, the manager spoke to me to say that I had done really well, but just to keep working hard and that is exactly what I intend to do.

“It is about trying to get in and stay in, but just now I need to be listening and doing what the manager asks of me.

“I need to keep working and if I get the chance to play I’ll definitely take it, but at the minute it’s just about being patient and working as hard as I can.

“It goes without saying that I would love to play but it’s not my place to be talking about that.”

Callum McGregor, who had sustained a slight strain, was rested for the Well visit and could return against Craig Levein’s side.

However, Olivier Ntcham will still be sidelined, so there is the opportunity for Henderson to get a place on the subs’ bench, at least.