The ex-Gers defender reckons the KNVB chiefs have scrapped the Eredivisie with Ajax and AZAlkmaar joint top with the Amsterdam club ahead on goal difference.

The Dutch bosses have refused to award a title this season although both clubs will be allowed entry to the Champions League.

Numan, who joined the Dutch revolution under Dick Advocaat in Govan in 1998, to the Sunday Post: “Maybe they (the SPFL) should follow the Dutch lead, declare Celtic the No. 1 team in the country and give them entry into the Champions League.

“But, as is the case in Holland, don’t call them champions.

“That would mean Celtic would not have won nine in a row.

“They’d have to start again next season to claim that championship.

“I think maybe this is the right way. That kind of scenario would anger and frustrate Celtic players and supporters – and I totally get that.

“I’d feel the same way if Celtic was my team.” 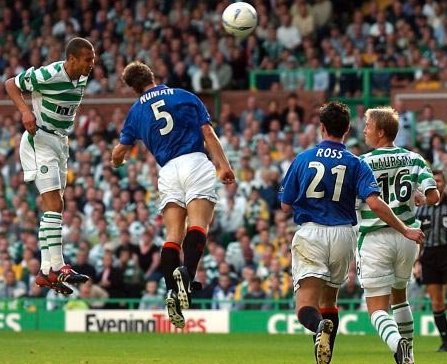 DUTCH AND GO…Henrik Larsson leaps above Arthur Numan to score a header in the 3-3 draw in 2002.

Numan, who is a scout for AZ Alkmaar, added: “The decision has been made in Holland and it is very frustrating from our point of view.

“We wanted to be able to push Ajax. The pressure would have been on them.

“It means that Ajax have been declared the No.1 team in Holland, but we both get entry into the Champions League, if – and when – that resumes for the 2020/21 season.

“But they have not been awarded the title. No Championships have been handed out.

“Also FC Utrecht have just missed out on a European place because they have played a game less.

“And the Dutch Cup Final between Feyenoord and FC Utrecht has also been cancelled.

“There has been no relegation and no promotion. I think it’s right no teams have been relegated. But, at least, one team should have been allowed to come up from the First Division.

“But now we need to move on and the focus of the whole country, in terms of football, is to be ready for the new season, hopefully starting around the beginning of September.”