As Scotland prepare to take on their oldest foes in the crucial Euro Finals encounter at Wembley this evening, the Celtic star’s accuracy at a set-play is remembered by the opposition boss.

Gordon Strachan’s Scotland side were trailing by a goal before Griffiths stepped to equalise in the 87th minute with a curling deadball that left Joe Hart bamboozled.

Only three minutes later, the Hoops hitman staged a breathtaking action replay to put the Scots ahead in the World Cup qualifying tie four years ago.

Unfortunately, the defence went to sleep three minutes into stoppage time when Harry Kane was left unguarded at the far post to knock the equaliser beyond Craig Gordon and another campaign was about to end in tears for Scotland. 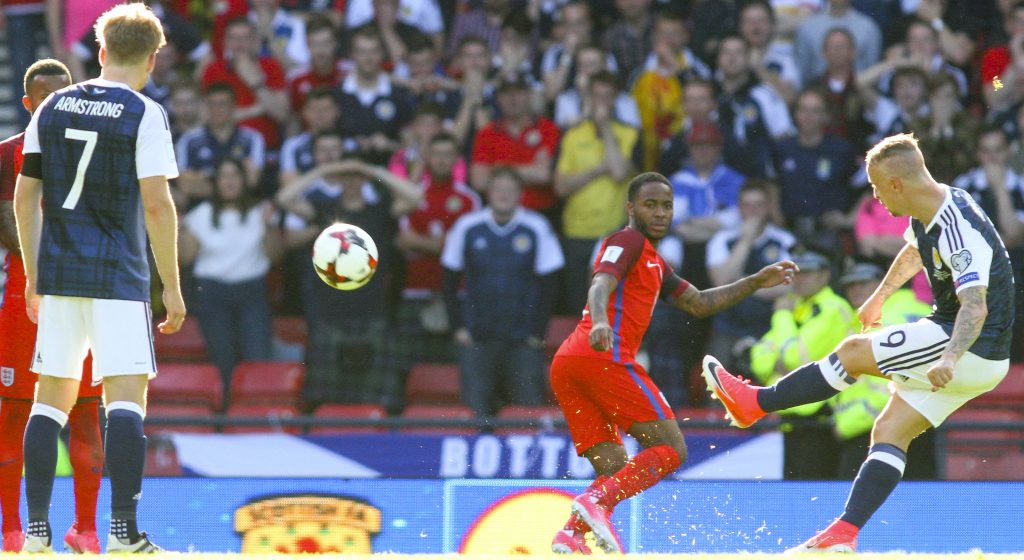 TAKING THE FREEWAY…Leigh Griffiths launches the first of his free-kicks into the England net four years ago.

Southgate will not forget that afternoon in Glasgow and admitted: “I still see those goals going in my sleep sometimes. They were two incredible free-kicks.

“We know that any team can score against you. They can have those moments.

“The moments of quality from that day can be replicated tonight. Anything can happen in a football match and you have to react.

“We did that day. We came back to get the draw. When we’ve gone behind in matches, we’ve found a way to win or get draws.

“We have to be prepared for anything. The way we react to setbacks is crucial.”

The England coach was not surprised that Kieran Tierney has been declared fit for the Scots and, speaking to the Daily Record, added: “I think him and Andy Robertson form a very good partnership down that side of the field.

TEARS AND CHEERS…David Marshall is left down and out as Patrik Schick celebrates his first goal in the 2-0 win.

“We know they’ve got some very good players, their build-up play, their ability to put a lot of crosses into the box, so we certainly don’t underestimate the challenge.”

The Scots have left themselves with an uphill struggled after losing 2-0 to Czech Republic in the opening tie at Hampden on Monday 24 hours after the English had got off to a winning start 24 hours earlier with a Raheem Stirling goal against Croatia in London.

Now boss Steve Clarke will have to reorganise his troops and there could be places for Ryan Christie, who started against the Czechs, and Callum McGregor and James Forrest who came on in the second-half as the game ran awy from the home side.