Celtic Quick News on News Now
You are at:Home»Latest News»‘WHY I COULDN’T SAY NO TO CELTIC,’ ROGIC
By CQN Magazine on 25th June 2018 Latest News

TOM ROGIC has underlined the reasons why he signed his five-year deal for Celtic – and why he is so happy at the Hoops.

The midfielder, currently in Russia with the Australian World Cup squad, rejected opportunities elsewhere to pledge his future to the champions.

Rogic said: “Re-signing was a nice moment for me and an easy decision.

“I’m working under a manager in Brendan Rodgers who, I feel, is challenging me every day.

“I certainly feel like i’m learning. I’m happy, I’m settled, I think I’ve played my best football in the past two seasons at the club and under the manager.

“So, it’s been a stable place for me to play, develop, win trophies, enjoy success and be tested in a lot of big games.

“I’ve played in front of a number of big crowds, none better than at home, but, as a player, you need to remain pretty calm and focused, rather than getting caught up in surroundings.” 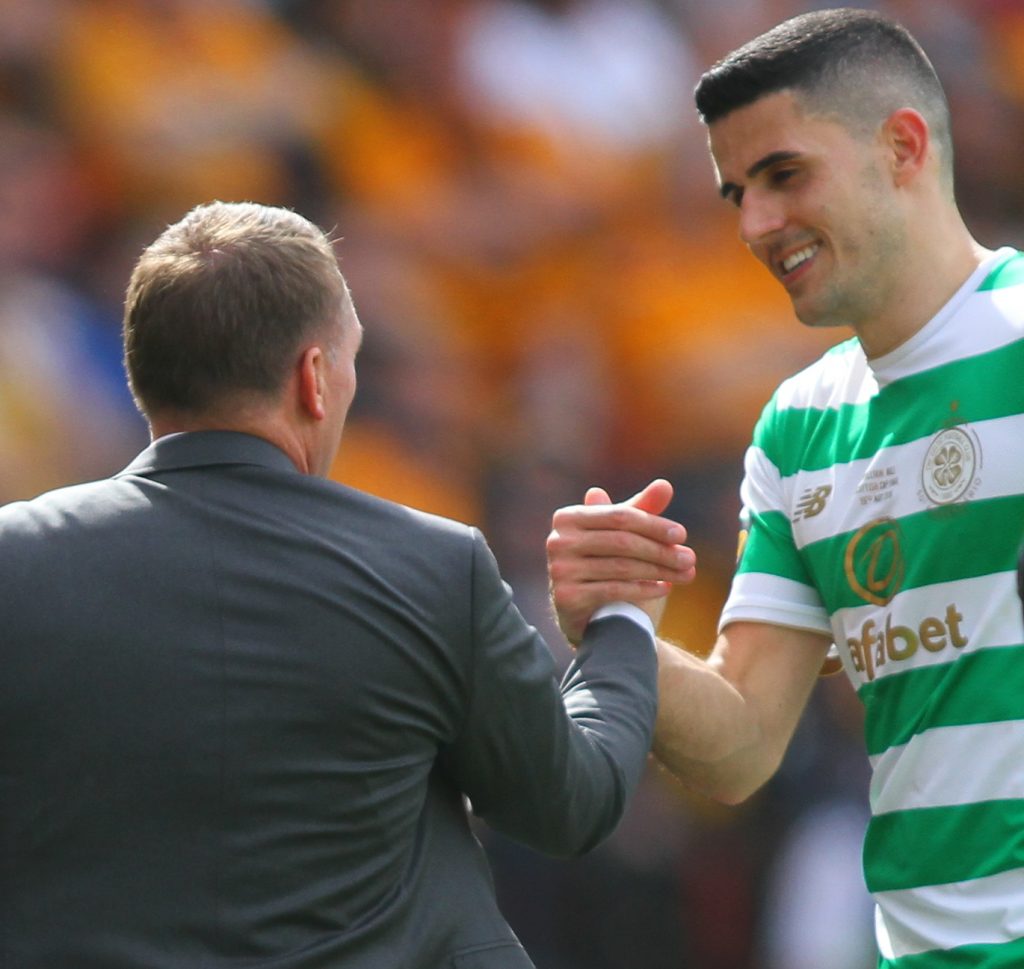 SHAKE ON IT, BOSS…Tom Rogic is all smiles as he is congraulated by Brendan Rodgers.

Playmaker Rogic had to take his personal life into consideration before agreeing his lengthy contract and added: “It’s a goldfish bowl existence in some ways, but the trade-off is playing Champions League football and winning multiple trophies with the champions.

“It’s a footballing city, it means everything to the people there and you certainly feel that there is that intense scrutiny and focus on the players.

“I’m a rather private person who enjoys a bit of quiet. There are days I wish I could do things a little differently, but, from a football aspect, I’m very happy with where I’m at.

“I’ve been in Glasgow long enough to know what that’s like and what it’s about. I’m very comfortable in my surroundings.

“I’m pretty laid-back and easy going and we have a pretty hectic schedule which doesn’t allow for much time to get away from football.

“Everything becomes relative, it becomes your new surroundings and your new normal. I prefer to look forward rather than relive the past.

“I’m in a good moment now in terms of my football.”

Rogic is likely to be in the Aussie midfield when they take on Peru in the third and last of their World Cup group games tomorrow afternoon.