Celtic Quick News on News Now
You are at:Home»Latest News»WHY KT IS IN SEVENTH HEAVEN
By CQN Magazine on 9th November 2018 Latest News

KIERAN TIERNEY was in seventh heaven as he drilled in the opening goal against RB Leipzig keeper Yvon Mvogo in the thrilling 2-1 Europa League Group B triumph at a frenzied Parkhead last night.

It was the fans’ favourite’s seventh goal in his 151st appearance and the Scotland international defender admitted: “I was just concentrating on getting the shot away.

“I am not noted for my goalscoring, so to get one was brilliant.”

KT continued: “We have given ourselves a fighting chance going into the last couple of games.

“All we can do now is just take it game by game. 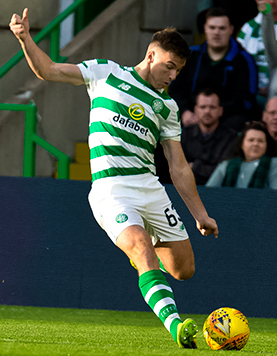 “We have had some massive games and some great results. The way we bounced back adds to how special a night it was.

“We are going in the right direction. The last few weeks have been great. We are building the momentum week by week.

“At Celtic, you are going to get three games a week and that is what I love.

“I have done it for the last few years and I am just doing it to my best ability.”

And the raiding left-back will be back in position when the champions travel to Livingston on Sunday for a tricky High Noon encounter against Gary Holt’s side who have a habit of making things difficult on their own pitch for visitors.

The Livi gaffer has already told Brendan Rodgers’ men they will get it tough, but this set of Hoops players have proved they have rediscovered their mojo after the hiccup at the start of the campaign.

They are one point behind Hearts with a game in hand as they zero in on their eighth successive Premiership crown and KT and his team-mates will be looking to add to their TWENTY-THREE goals in the past five domestic games where they have claimed eight against the Tynecastle side in two outings, six against St Johnstone, four versus Hibs and five at Dundee.