Celtic Quick News on News Now
You are at:Home»Latest News»WHY NEW BHOY AIMS TO BE CENTRE OF ATTRACTION
By CQN Magazine on 19th January 2020 Latest News

NEW Bhoy Patryk Klimala hopes to be the centre of attraction at the champions.

Celtic’s £3.5million Polish striker, who had a 10-minute cameo in last night’s 2-1 Scottish Cup triumph over Partick Thistle at Firhill, is eager to show why so many fans liken him to Leicester City’s speedster Jamie Vardy.

And Klimala insisted he is much happier going through the middle than playing on the wing.

Like England frontman Vardy, the Pole’s game is all about blistering pace, playing on the shoulder of the last defender and racing clear with electric acceleration.

The Under-21 international, speaking to the Sunday Mail, said: “You can compare me to Vardy maybe 90 per cent. I know about the player, but I am not a big fan of English football.

“I don’t really watch it often, but from what I know you could maybe compare me 90 per cent.

“I don’t prefer to play on the wing. I prefer to be in the middle as a striker. It doesn’t matter if I play on my own or as part of a pair, I just want to play centrally. I could play with Odsonne Edouard. I would be quite happy with that.

“I haven’t seen a lot of Edouard, but I saw his last game, he played well and scored a goal.“He is a really good player.” 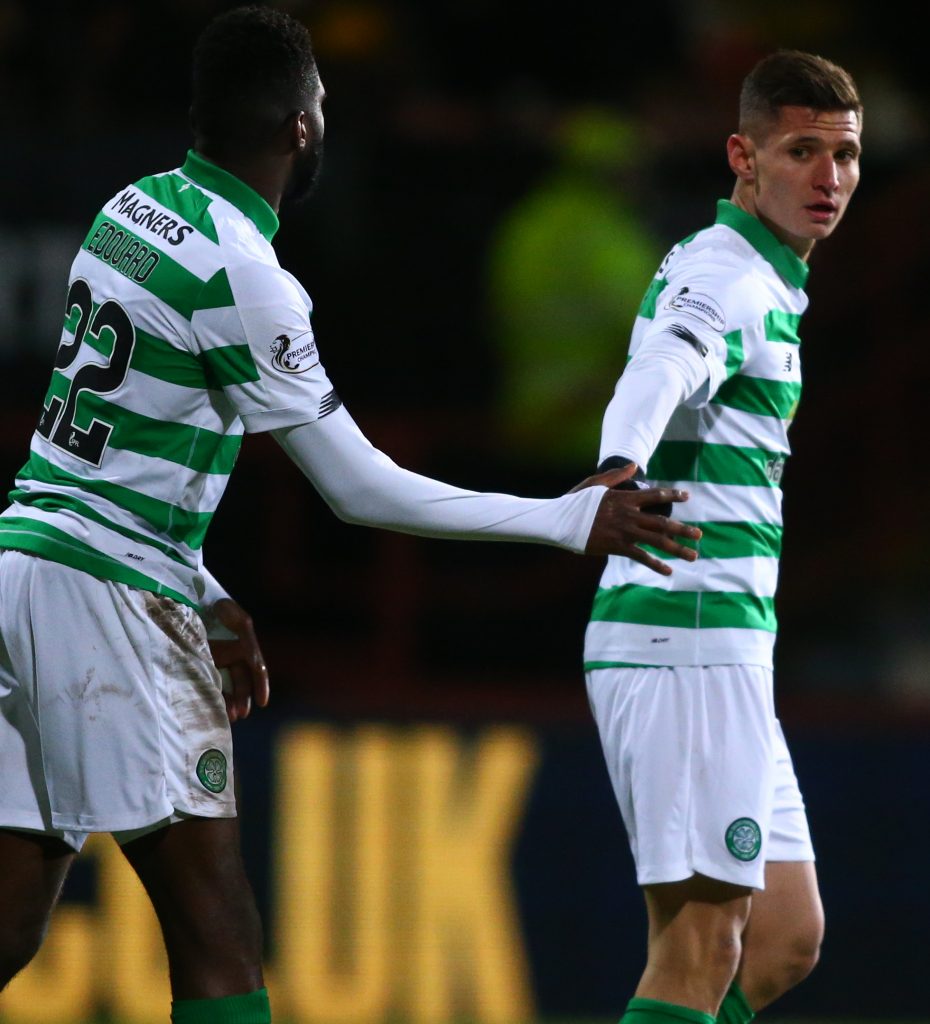 WELCOME TO CELTIC…Patryk Klimala is greeted by Odsonne Edouard at Firhill.

Klimala also admitted he can’t wait to sample the famous European nights under the lights in the east end of Glasgow.

The Hoops are set to face Copenhagen in the Europa League last-32 next month – and the forward revealed he could have been playing AGAINST Neil Lennon’s side.

He said: “It’s true there was a bid from Copenhagen on the table. But as soon as Celtic came in with their offer, I wasn’t considering any of the other clubs. I’m looking forward to playing against Copenhagen in Europe now.

“Every player’s dream is to be able to play in the European cups, not only the Europa League, but the Champions League, too.

“I would give it the same importance as domestic football. I want to do well in both for Celtic.

“There is a different atmosphere in the European games, it’s special, and I am looking forward to experiencing that at Celtic Park.

“I want to give the supporters a lot of happiness and, hopefully, score a lot of goals for Celtic.”

Klimala came on for Leigh Griffiths, who had opened the scoring against the Jags for his first strike in five months, to get a brief sample of the Scottish game.

Callum McGregor had just scored what turned out to be the winner before blundering referee Alan Muir awarded the Championship side a distinctly dodgy penalty-kick in stoppage time.

Klimala will hope such dodgy decisions will not be the norm in his time at Parkhead.