Celtic Quick News on News Now
You are at:Home»Latest News»WHY POSTECOGLOU WAS THE LUCKY ONE: A PERSONAL THOUGHT FROM AUTHOR ALEX GORDON
By CQN Magazine on 23rd September 2021 Latest News

AUTHOR Alex Gordon, who has written fifteen Celtic books – with the latest entitled, ’50 Flags Plus One’ – has been reliving a horror story this week.

The former sports editor of Scotland’s top-selling newspaper was at Ibrox Stadium on the day Celtic lost on penalty-kicks to Raith Rovers 27 years ago.

Today, in another CQN EXCLUSIVE, Alex takes an unwanted walk down memory lane.

ANGE POSTECOGLOU was the lucky one – he was on the other side of the world when Celtic played Raith Rovers in the League Cup Final on November 11 1994.

I was in the Ibrox press box that thoroughly miserable afternoon when the Fifers won 6-5 on penalty-kicks following a 2-2 extra-time stalemate.

While the future Hoops manager, then aged 29, swanned around in sunny Australia as a defender with Western Suburbs, I witnessed one of the most agonising days in the history of a proud football club.

It was the ideal opportunity to win the side’s first silverware since Joe Miller slid a shot under Rangers keeper Chris Woods to lift the Scottish Cup in 1989. Club legend Billy McNeill had left as manager in unfortunate circumstances in 1991 to be replaced by Liam Brady. 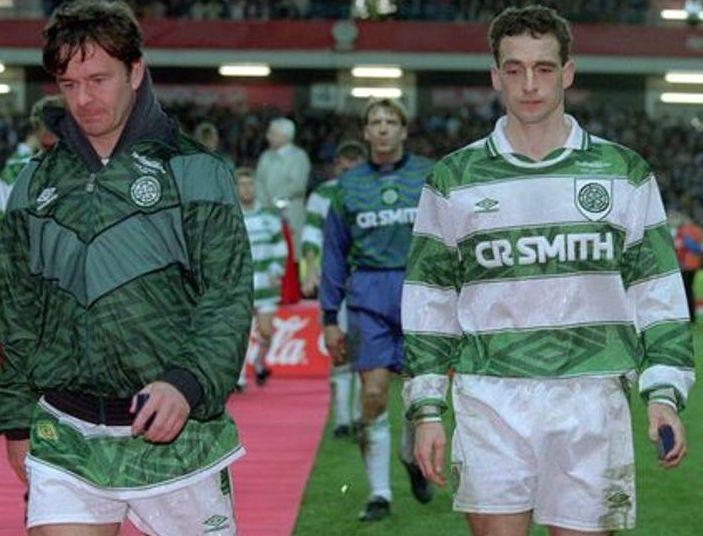 DEJECTED…Charlie Nicholas and Paul McStay can’t hide their emotions as they trek off Ibrox followed by keeper Gordon Marshall.

I was sports editor at the Sunday Mail at that stage and I spent a fair bit of time with the Irish legend during his two and a half years at Parkhead. When it was all over, he told me: “I’ve got to hold up my hands and say the pressure, without doubt, got to me. Of course, it did. You’ve got to ride the storm and, sadly, I couldn’t manage it. That is why I had to resign.”

Lou Macari came in as a replacement under the old board and was quickly on his way after a fall-out with the incoming Fergus McCann. That opened the door for Tommy Burns and his appointment was warmly applauded by the Celtic support as they wholeheartedly wished success for “one of their own”. 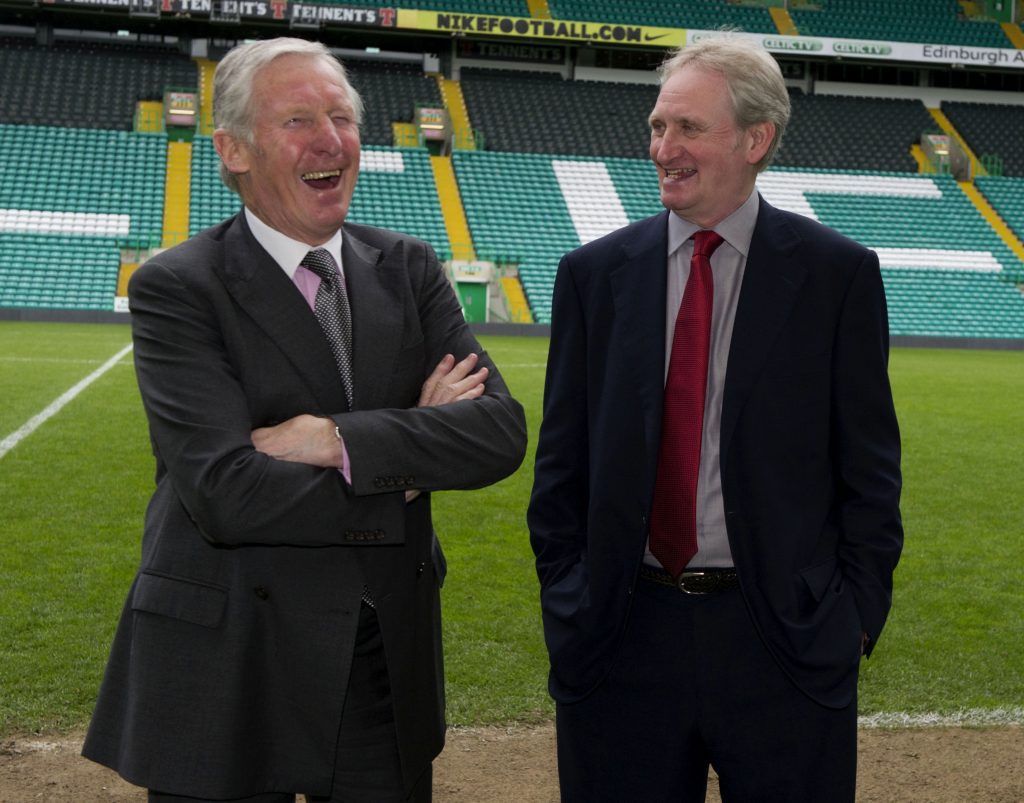 IT TAKES TWO…author Alex Gordon shares a joke with Celtic legend Billy McNeill at Parkhead in 2016.

By the time the League Cup Final – then under the guise of the Coca-Cola Cup – was on the horizon, I had left the newspaper to run and then buy 7 Day Press, the biggest sports freelance agency in the country. It was in that guise, I met Tommy in a Glasgow hotel a fortnight or so before the game at Ibrox.

If I remember correctly – it was 27 years ago! – Tommy was taking the players away for an entire week before the game to be free of media interruptions. He had arranged to get all his interviews done for the broadcast companies as well as the journals to give him the opportunity to concentrate on winning his first piece of silverware as a manager. 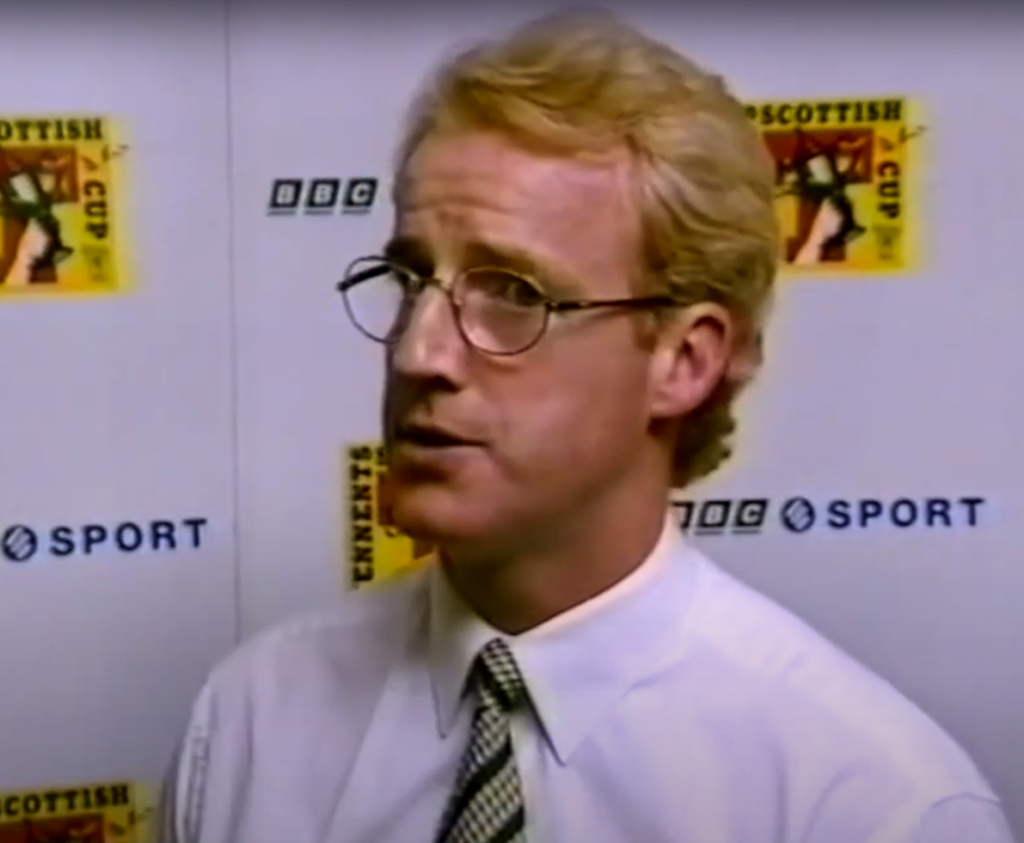 Tommy was his usual affable self as he sat at the table, but there was little doubt he was nervous. He was utterly committed to bringing success to the club closest to his heart, but he was taking nothing for granted. The rest of the football world and its many know-alls had written off the team from Kirkcaldy. Trust me, the guy sitting opposite me that day had not.

On the early afternoon of the encounter, I met up with 7 Day Press reporters Mark Guidi and Mark Wilson, two emerging talents whose skills took them into national newspapers and, in the former’s case, the medium of radio.

We took our seats in the press box on a chilly winter’s afternoon in Govan, the showpiece confrontation being played at Ibrox with Hampden under development.

Following Celtic in the mid-sixties as a teenager, I have to say I had happier days at the ground of the club’s main rivals.

I won’t dwell on the actual two hours of football and the penalty-kicks, if you don’t mind. Steve Crawford gave the second-tier outfit the lead in the 19th minute with a crisp, low drive past Gordon Marshall, but Andy Walker snapped up the equaliser just after the half-hour mark. Charlie Nicholas pounced to put the Hoops in front six minutes from time.

It looked as though Tommy Burns would be holding aloft the trophy in his first season as Celtic manager, but, unfortunately, Marshall spilled a shot from Jason Dair and Gordon Dalziel was right in line to knock the rebound into the inviting net in the 86th minute. It would be churlish to say the Raith man looked offside.

Surprisingly, there were no goals in the added-on half-hour and then it went to penalty-kicks. Stuart Gray, son of Leeds United legend Eddie Gray and who was highlighted as a Celtic prospect at the time, had gravitated in the general direction of the press area by the time the full-time whistle sounded.

I stood up in an effort to relax the tension and Stuart caught my eye. “So, what happens now?” he asked.

“I don’t want to even contemplate it,” I answered.

It’s in the history books now that Raith Rovers won 6-5 in the spot-kick shoot-out. With Dame Fortune snarling on Celtic that day, Paul McStay missed the crucial kick with Scott Thomson blocking his effort.

Afterwards in the media room for the aftermatch conference, the Fife goalkeeper was asked how that stop ranked with his other penalty-kick saves.

Fates has decreed that trophy would not be bedecked in green and white that afternoon.

Ange Postecoglou, totally oblivious to the occurrences in a cold and shivering part of another country on the other side of the world, was the lucky one.

Ignorance is bliss, so I’m told.