Celtic Quick News on News Now
You are at:Home»Latest News»‘WHY WE STRUGGLED,’ RODGERS
By CQN Magazine on 10th May 2018 Latest News

FRUSTRATED Brendan Rodgers claimed Celtic would have struggled to break down “a team of firemen” if they had played in the defence-in-depth formation favoured by catatonic Kilmarnock in last night’s no-score snore draw at Parkhead.

This was the champions’ SEVENTH home draw of the season as the Hoops manager’s winless streak against Steve Clarke stretched to three games.

Rodgers was clearly unimpressed by the Rugby Park spoilers who set out to stifle the game and wipe out any hopes of entertainment.

He said: “It wouldn’t matter if you put 11 firemen that deep on a pitch.

“It is always difficult when you play against that system which is very deep and very low, especially at this stage of the season.

“If we score, they have to come out and chase the game.” 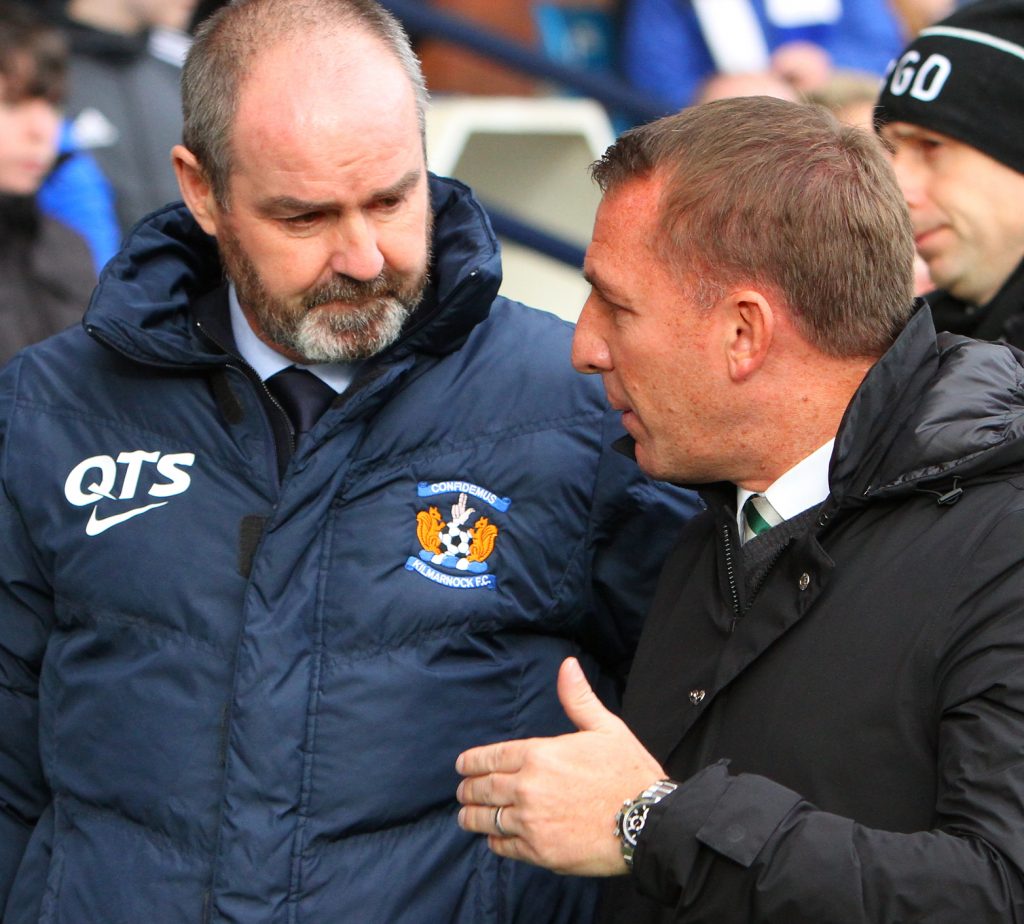 GETTING TO THE POINT…Brendan Rodgers has a word with Kilmarnock boss Steve Clarke.

Rodgers’ team failed to spark against a dull side who will keep spectators away from the game. But, to be fair, Celtic were without the injured Odsonne Edouard and Leigh Griffiths, who is still recovering from a bout of tonsillitis.

The Irishman decided not to risk Moussa Dembele with the title party against Aberdeen due on Sunday and the Scottish Cup Final against Motherwell looming a week on Saturday.

He admitted the lack of a natural attack leader contributed to his side failing to make the breakthrough.

Rodgers added: “You do need that bit of brightness and cleverness in there and it didn’t come off for us on this occasion.

“It was a hindrance for us because I would have played a different shape if I had my strikers fit.

“Moussa is our only fit striker at the moment – plus he is coming back from injury – so I couldn’t put him at risk.

“I need him for the weekend, so he should come back in for the Aberdeen game.

“If you get an early goal, then it opens it up a bit more. But we weren’t able to.

“We had total control of the game and got into some good areas. We just didn’t have that bit of luck to break through. On the plus side, we managed to get a lot of guys some game time and we also kept a clean sheet.

“There’s no doubt if I’d had the players available, I’d have played a different system, but it was too big a risk.”