JOE MILLER is backing Celtic’s wide Bhoys to run Rangers off the park at Hampden tomorrow.

The former Hoops Scottish Cup hero, who hit the winner against Graeme Souness’s side in 1989, reckons the massive playing surface will leave the Ibrox men lost in space.

Miller said: “If the real Celtic turn up – and I’m confident Brendan Rodgers will make sure they will – I’ll take them for a 3-0 victory and move to within 90 minutes of a double treble.

“I just cannot see Rangers preventing my old side from making history.

“For a start, this Celtic team obviously enjoy playing on the big pitch at Hampden. The wide areas suit their preferred option of playing.

“They like to keep possession, use the flanks, move the ball from side to side, take control and dictate the flow of the game.

“And everything seems to be coming together and falling into place at the moment for the team.

“For the first time this year, the manager has practically a full complement of players from which to choose.

“Stuart Armstrong, Leigh Griffiths and Patrick Roberts all coming back from injury at the same time is a major plus. It must be like buying three new players in a transfer window.

“Scott Sinclair will also be eager to finish the campaign on a high after his debut season success where he scored a phenomenal 25 goals and won just about every Player of the Year award up for grabs.

“I think he is a fantastic player, although his form has dipped a little in recent months.

“With his talent, though, you just know he has the tools to come storming back and make some of his critics eat their words.”

Miller, who played a significant role in Celtic’s centenary league and Cup double in 1988 after arriving from Aberdeen that season, is backing Moussa Dembele to be flying in the run-in to the campaign.

He said: “Moussa is such a powerful presence, a big, strong boy who is difficult to push off the ball.

“Listen, I’ve heard some people who should know better, sniping at his goal tally in his second season at Parkhead.

“He was a virtual unknown when he arrived as a 20-year-old frontman from Fulham as one of Brendan Rodgers’ first signings. At a £500,000 development fee, he must be one of Celtic’s best-ever signings.

“And for a young guy coming into a new country and scoring 32 goals is simply amazing. Remember, though, he was hampered by injury at the end of last season and his only start in the opening games of this term was the Champions League qualifier against Linfield at Parkhead back in July.

“He didn’t score that evening as Celtic won 4-0 and then he was out again for the entire month of August before coming back in September against Ross County when he scored his first goal of the campaign.

“So, naturally, his strike rate is bound to suffer after a false start. Having said that, he has still claimed 14 goals in something like just over 20 starts and that’s not bad going.

“I believe the manager will have the French lad in at the kick-off and he could be joined Leigh Griffiths at some stage. 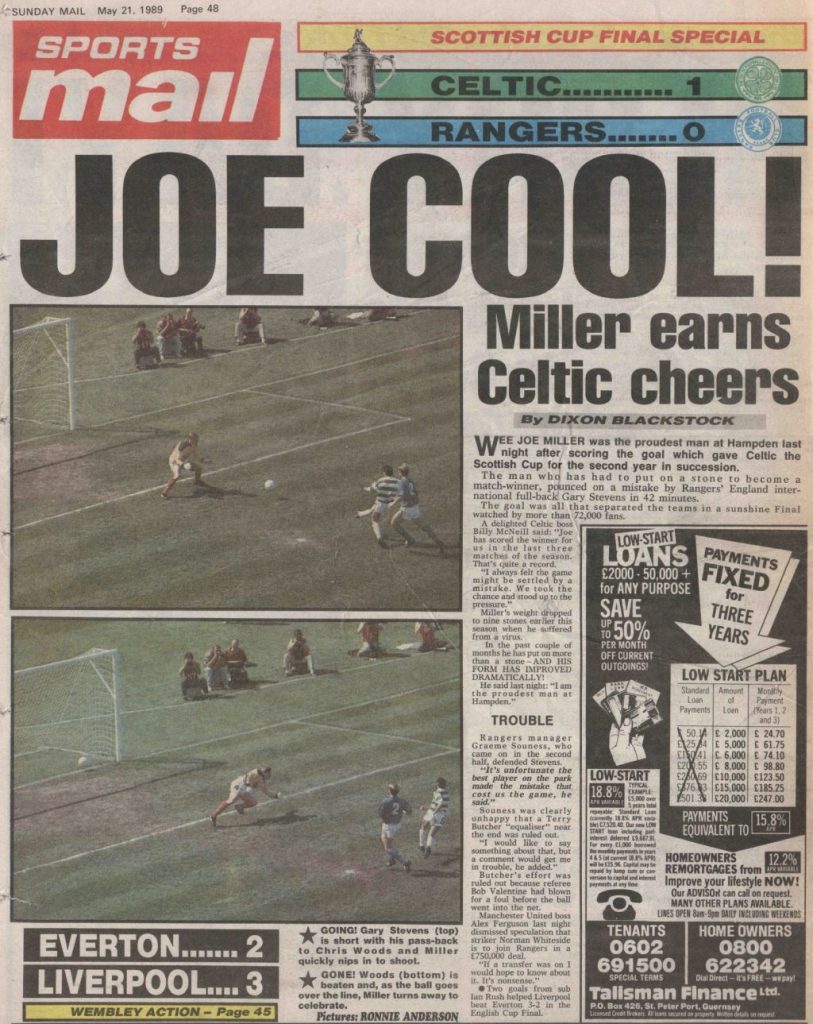 JOE COOL…how the Sunday Mail back page looked on May 21 1989 after Miller’s Scottish Cup winner.

“There is no argument Griff is an impact players and he emphasised that only last weekend when he came on at the start of the second-half against Hamilton Accies with the score at 1-1.

“Inside a minute, he got his head on a superb left-wing cross from Sinclair, the ball was in the net and the points were once again heading for Parkhead.

“I don’t see any reason why Dembele and Griff wouldn’t start against Rangers. Why not? They’ve proved they can play alongside each other and they both have different strengths.

“But that rarely fits Brendan Rodgers’ system with one up front and you can’t argue with what he had achieved since arriving at Celtic.”

The Irishman, of course, is unbeaten in nine games against the Ibrox outfit, winning seven and drawing two, and the champions are favourites to reach the Cup Final against Motherwell or Aberdeen on May 19.

Miller, though, acknowledged that upsets can happen when the Glasgow teams lock horns.

He recalled: “Back in 1989, Rangers were big favourites to beat us in the Scottish Cup Final to complete the domestic clean sweep.

“Billy McNeill and his players, though, were having none of that. I netted the only goal of the game late in the first-half when I seized on a mistake from Gary Stevens and drilled a low shot past Chris Woods.

“Rangers, as you would expect, came right back at us, but we held firm to capture the silverware.

“Near the end of the 90 minutes all we could hear from our fans was the chorus of ‘Where’s your treble gone?’ mimicking the pop song ‘Where’s your momma gone?’.

“Maybe we were underestimated that day, certainly the bookies didn’t fancy us, but I don’t believe for a moment Brendan Rodgers will allow any of his players onto the park tomorrow who does not have the right attitude.

“That’s one of the reasons my old club are three hours, excluding the possibility of extra-time, away from a historic six domestic trophies on the bounce.”