Celtic Quick News on News Now
You are at:Home»Latest News»WIM’S ONE-SEASON WONDER – AND THE END OF 10-IN-A-ROW
By CQN Magazine on 9th May 2020 Latest News

SIMON DONNELLY has revealed Celtic had to stop Rangers from winning 10 in a row – to honour the Lisbon Lions!

The former Hoops striker played his part in Wim Jansen’s side making certain their Ibrox rivals did not go double figures in a sequence that would have overshadowed the achievements of Jock Stein’s great team from 1966 to 1974.

Donnelly lined up alongside Henrik Larsson when they faced St Johnstone exactly 22 years ago at Parkhead. The Bhoys went into the fraught encounter in the knowledge a triumph would make certain of the Scottish crown while derailing Walter Smith’s side at the same time.

As the Celts lined up against the Perth visitors, the Govan club were preparing to take on Dundee United at Tannadice.

Donnelly, who was only 24 at the time, recalled the momentous occasion as he told the Daily Record: “It’s up there with the most important dates and achievements in the club’s history. To preserve the Lions’ nine in a row was massive.

“If Rangers had got 10, they could have kicked on and won far more. It was a really important season.”

The week before the match against St Johnstone, Jansen, in his only season in the Parkhead dug-out, saw his players blow the opportunity of sealing the flag against during a nerve-riddled display at East End Park.

DONNELLY DYNAMITE…Celtic striker Simon Donnelly fires the Hoops into the lead against the Fifers.

Donnelly fired the Hoops into a first-half lead, but, with the clock ticking down, Craig Faulconbridge looped a header over the helpless Jonathan Gould for the leveller. The visitors toiled their way through the remaining seven minutes to set up a last-day showdown.

The ex-Scotland international hitman continued: “I remember the expectation of the Dunfermline game. It was the first time we had the league in our control, after Kilmarnock had won at Ibrox on the Saturday.

“We played the next day and every Celtic fan expected us to go there and win the league. That didn’t pan out and I remember the disappointment and nerves kicking in on the bus on the way back.

“We knew we’d have to wait until the following Saturday to achieve it. We went out for a Chinese and a few beers on the Tuesday, as we did every week when we had the Wednesday off. We just decided to treat it like any other week.

“If that had happened now with people having camera phones and stuff, we’d probably have got dog’s abuse.

“We came through that unscathed, had the next day off then worked hard on the Thursday and Friday.” 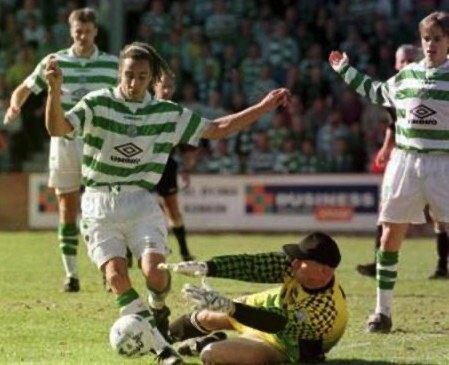 SO CLOSE…Dunfermline keeper Ian Westwater takes the ball off the toes of Henrik Larsson with Marc Reiper and Simon Donnelly watching.

On the day of the flag decider, Donnelly added: “Henrik scored early on. Having got in front early the normal pattern of play would be that we’d go on and batter St Johnstone 3-0 or 4-0 because an early goal usually killed teams off. That’s not how it panned out.

“They were dogged and we couldn’t get that second goal to kill them off. They also had a real chance when the ball was bouncing about our penalty box, but they couldn’t stick it away.

“You could sense the tension going into the second-half. I watched it back last week and I could see the nerves coming into my play.

“I lost a couple of passes and I ended up getting hooked for Harald Brattbakk which in hindsight was the best thing!

“Everybody knew Rangers were getting the result they needed at Tannadice and, at 1-0, we were one mistake or a St Johnstone screamer away from losing.

“We’d been over that course the week before, being 10 or 15 minutes from winning it when Craig Faulconbridge scored for Dunfermline. That was playing on everybody’s mind and the play was scrappy. It wasn’t a good spectacle.

“But then we got the second goal and the main emotion was relief. I was on the bench by then and you just become a fan because you can’t influence anything on the pitch. 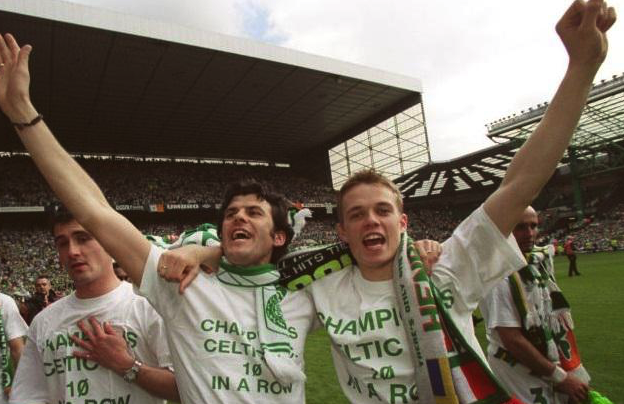 THREE CHEERS…Darren Jackson and Simon Donnelly celebrate the title triumph with David Hannah about to join in.

“We worked it down the right, Jackie McNamara put the ball in and Harald slotted it home. Watching it the other day, it brought back the goosebumps.

“As soon as that goal went in that was it for me. We weren’t going to concede two goals in the time that was left.

“It was very much a squad effort and some guys didn’t play a lot of games but still played their part. I remember eight or nine of them in the tunnel area, bouncing about and singing, just before the final whistle. Guys like Darren Jackson, Tosh McKinlay and David Hannah were there.

“At the end of the game we were taken back inside and were celebrating in the dressing room.

“John Higgins, who had been parading the world snooker trophy at half-time, was pushed into the dressing room. All the Scottish boys welcomed him with open arms and the foreign lads were thinking: ‘Who’s this guy?’

“We went into the players lounge to see our families for a couple of minutes before going back out to lift the trophy.”