Celtic Quick News on News Now
You are at:Home»Latest News»WONDERBHOY No.3 HEADS FOR HOOPS
By CQN Magazine on 13th July 2021 Latest News

REPUBLIC OF IRELAND Under-21 midfielder Bosun Lawal is poised to sign for Celtic.

The 18-year-old product of St Kevin’s Boys Club in Dublin will complete the formalities of agreeing a three-year deal today, according to a report in Football Podcast ‘Following the Floodlights’.

Lawal will quit Watford, where he was recently named Player of the Year at the club’s academy, and it is claimed he will be earmarked for a key role in the Hoops’ B squad for their Lowland League debut. 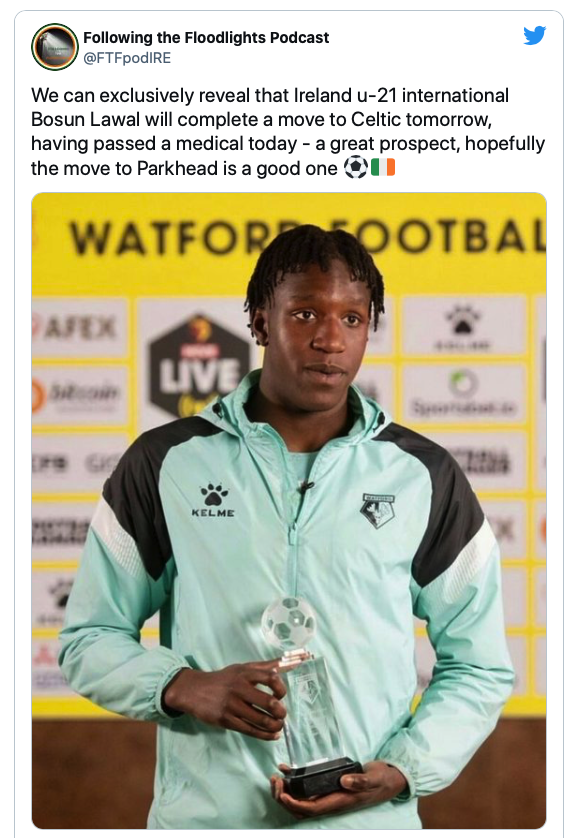 Vicarage Road legend Troy Deeney praised the teen recently when he said: “I saw him against Newcastle, I thought he did really well.

“He can get past people effortlessly and keep striding, he has that big long stride.”

The Parkhead Colts are due to play their Ibrox counterparts in the fifth tier of Scotland’s divisions a fortnight on Saturday.

Lawal will become the third highly-rated youngster to join Celtic this summer following the arrival of Sheffield Wednesday duo Liam Shaw and Osaze Urhoghide at the end of their Hillsborough contracts although they will cost something in the region of £700,000 in development fees.