Since Dinamo Kiev inflected Celtic’s first home defeat in European competition, on what was our first European game after winning the European Cup four months earlier, last night’s shocker to Sparta Prague was our 36th and worst home reversal in Europe.

Three years ago PSG scored five, but, unlike Sparta, they did not hit the woodwork on two other occasions, and they are PSG.  Last season Cluj also scored four, winning by a single goal, but by any measure, across 58 years of home European ties, that is without shadow of a doubt, the low point.  We are now the team fans all over Europe point to and laugh, all the money, yet Cluj, Copenhagen, Ferenvcaros, Sparta.

What has gone wrong?

It is not the formation.  Without changing to three at the back, I don’t think we would have won the league last season.  This season, we tried four, then three, then four, then both defensive lines at different times of games, but the formation is not the problem.  It is possible to defend, control games and create chances with either line-up.  And as we have seen, a change in formation does not make a slow or clumsy defender fast and assured.  If only it were as simple as Scott Brown’s advancing years, or injuries and absentees; they are red herrings, this malaise is more serious.

Post-match, Callum McGregor and Neil Lennon spoke well.  The player admitted to humiliation, the manager walked that fine line of showing contained anger, but he was clear: a lack of application from the players was to blame.  What a thought to ponder.

I am fond of many in our squad; they have delivered success beyond my wildest imagination.  I am fond of the manager too, for the same reason – results are all, and his filled the well some time ago.  If I thought sacking the manager would safely resolve matters, I would tell you so.

It is Neil’s responsibility to put the players on the field in the correct frame of mind to compete at their best every time.  He is failing in this, his criticism last night is self-directed, but sacking him right now would be a Gambler’s Play.  It might work, it might result in carnage, anyone convinced they know how it would play out, underestimates the complexity of the question.

What I know for sure is that we stand at an historic precipice and no one is coping.  We need to reframe the challenge ahead, if we do not, the season will play out as you now fear.  Together, we have a great opportunity to record magnificent achievements, a fourth consecutive treble, 10 and all the glory that comes with it, but all you see are demands weighing everyone down.

This responsibility lies on Neil Lennon and the players because they are winners.  They have the Scottish Government hammering them while punching for Newco, they have 10,000 critics weighing-in online (which they read and are not helped by).  These are the wages of success, lesser mortals have six critics, let this fuel their engine.

After the game, Chris Sutton insisted Europe was still important to Celtic.  Chris, you don’t live in the towns of Lanarkshire.  Europe has gone this season; we need to reframe this too.  Our three remaining Europa weeks are an opportunity to develop the squad and rest weary legs, while Newco will have at least five competitive Europa games.  We must now think of this as an advantage; make the most of it.

We know how to win leagues and trophies.  We were on our knees at New Year but while others “bottled it” and we got on with the business of winning.  There are no white, saltire or union flags here, only green league title flags.  To the manager, coaches and players, what a privilege this challenge is. 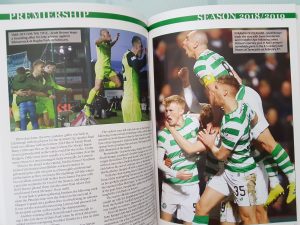 Relive some of the better days that took us here in Celtic: Treble Treble, by Alex Gordon, a 100 page full colour booklet on how the Invincible, Double and Treble Trebles were won.  Our stock is available here for £5 each (retail £9.95).