Celtic Quick News on News Now
You are at:Home»Latest News»WRITTEN OFF AT IBROX: LENNY’S ANSWER
By CQN Magazine on 17th October 2020 Latest News

NEIL LENNON will recall September 1 last year when he took Celtic across Glasgow for the first derby confrontation of the season.

The Hoops boss will also remember his team were underdogs and written off by so many of the game’s ‘experts’ before the kick-off on a memorable day at Ibrox..

Lennon’s side were still reeling in the aftermath of their Champions League exit from the Romanians of Cluj, beaten 4-3 at Parkhead after a solid 1-1 draw in the first leg.

It was a disastrous and costly exit for the team and the manager was under pressure after watching the holders struggle to overcome second-tier Dunfermline 2-1 in extra-time of the Betfred League Cup opener in the east end of Glasgow the previous week.

Author Alex Gordon’s latest Celtic book, ’50 Flags Plus One,’ takes us back to the crucial encounter in Govan last year. In a CQN EXCLUSIVE, the book sets the scene for this afternoon’s meeting between the clubs at Parkhead.

The bookmakers made the home side favourites which, if they were proved correct, would see Rangers leapfrog the champions into the unfamiliar number one position.

All sorts of bullish promises had been expressed, all sorts of random threats delivered. On the previous two occasions at Ibrox, the Celtic managers, Brendan Rodgers and Neil Lennon, had witnessed their team far too easily swatted aside without laying a glove on the opposition. Steven Gerrard seemed fairly confident of making it three wins on the trot.

Reality has a habit of gatecrashing fantasy. Odsonne Edouard, with grace and ease, ambled onto a threaded pass from Mikey Johnston, drew Allan McGregor from his line and caressed the ball under him for the opening goal just after the half-hour mark. It was no more than Celtic deserved.

Lennon was then called upon to demonstrate his emergency tactical know-how when Nir Bitton, who had been linking up encouragingly with Christopher Jullien in central defence, was forced to limp off in the sixty-sixth minute. It meant a reshuffle with Hatem Abd Elhamed moving into the middle and Moritz Bauer coming on at right-back for his first appearance.

At that stage, with twenty-four minutes still to play, Celtic’s back four comprised of Bauer, Elhamed, Jullien and Boli Bolingoli, a quartet who had arrived in the summer and who had never previously played alongside each other until that moment. Behind them was goalkeeper Fraser Forster, performing in his second game for the club in five years. 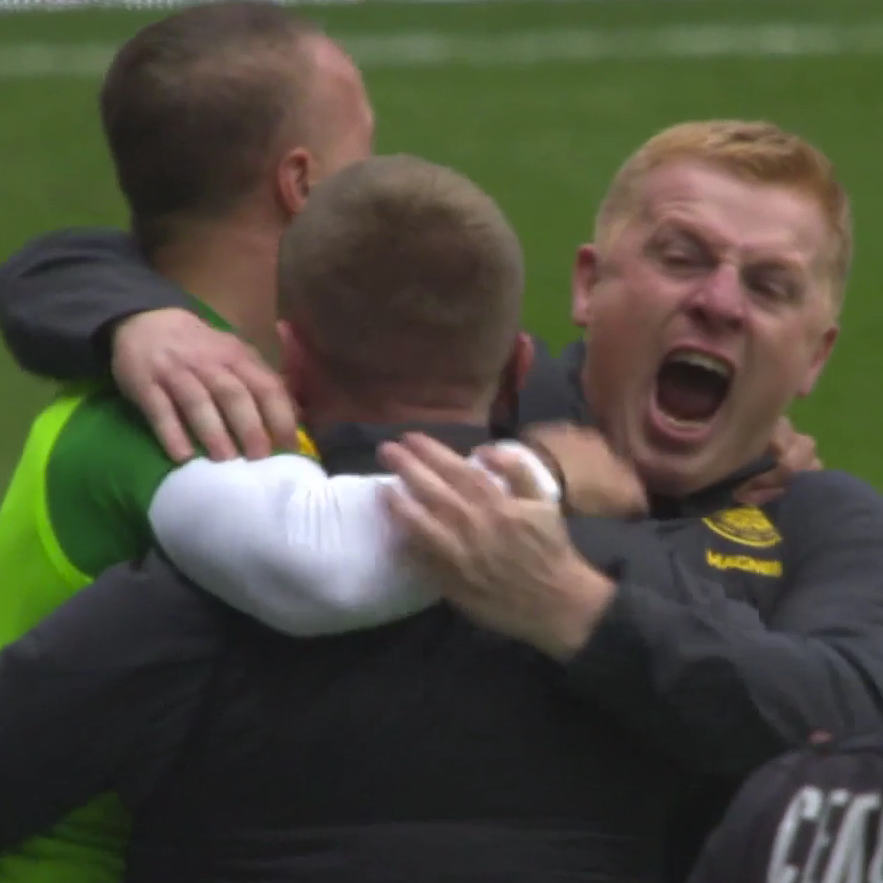 No matter. Celtic were in control and that was emphasised when Jonny Hayes, who had come on for Johnston in the eighty-fourth minute, raced seventy yards to knock in the second goal after McGregor had blocked his original strike.

It was party time in a corner of Ibrox. At the final whistle, Neil Lennon strode purposefully across the pitch to join in the celebrations. He blew kisses to the cameras; no words were required.

Afterwards, in the confines of the Ibrox media room, he was afforded the opportunity to give his verdict: “Coming into this game, we were an afterthought. It was all about the opposition and what they were going to do to us.

“We stayed strong and played brilliantly. We came here to win. It was an outstanding performance. It’s been a difficult couple of weeks.

“We were on the front foot from the start. We dominated the first-half, weren’t really in any trouble and Allan McGregor kept it from being three or four. Maybe, just maybe, people will now cut us a bit of slack and respect us.”

Every syllable delivered by the Celtic manager had been bolted in by a rivet.

*Don’t miss the unbeatable match report from Celtic v Rangers this afternoon – only in your champion CQN.