KRISTOFFER AJER has been forcing himself to view x-certificate film footage as he attempts to prevent repeats of the mistakes that have cost Celtic heavily in recent weeks.

The Norwegian international centre-back gifted Rennes a penalty-kick a fortnight ago in Brittany to present the French side a crucial goal in the opening Europa League Group E encounter.

Even blundering Spanish referee Jose Sanchez could not miss his clear-cut foul on Nigerian dangerman M’Baye Niang who accepted the opportunity to fire the French outfit into the lead. Thankfully, Ryan Christie thumped in a second-half spot-kick to give the Hoops a 1-1 draw.

The 21-year-old defender took his eye off the ball against Hibs at Easter Road on Saturday when he turned a right-wing cross from Chirstian Doidge beyond Fraser Forster in another slip to hand the advantage to the Edinburgh side.

Once again, the skyscraper pivot was bailed out when Christie once again rallied to the cause and netted with a soaring header beyond Chris Maxwell for the leveller.

However, Ajer’s worrying lack of concentration went a long way to the eight-in-a-row champions conceding their 100 per cent Premiership record at the eighth hurdle.

It’s been an eventful couple of weeks for the versatile back-four operator and he accepts he MUST do better or face the inevitable consequences. 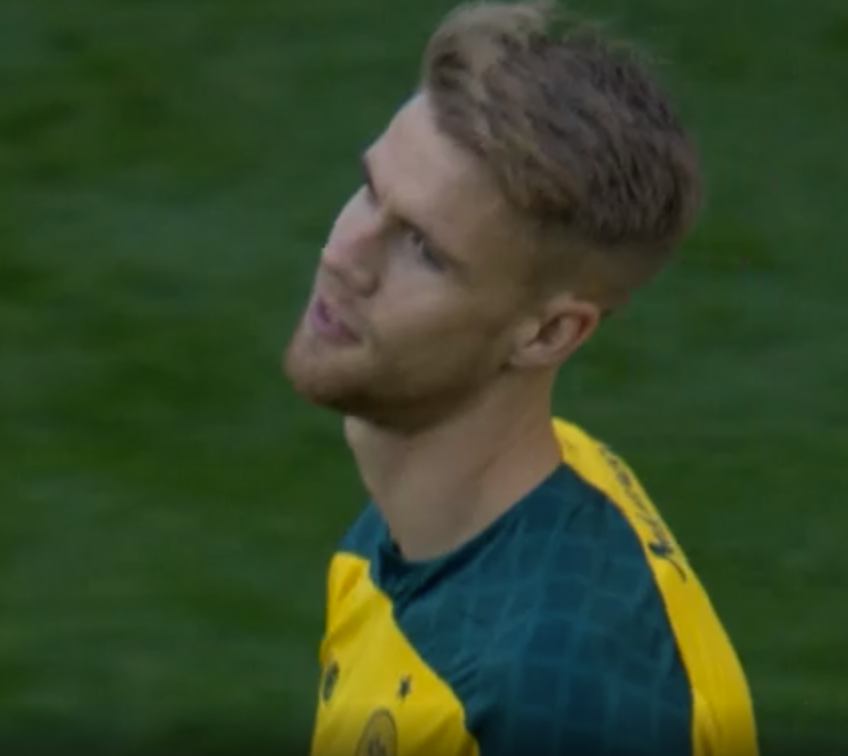 DISMAY…Kristoffer Ajer looks gutted after his own goal at Hibs on Saturday.

Ajer has been poring over video reruns of those incidents in an effort to eradicate them from his play.

He will go under the spotlight against Cluj in the Europa confrontation at Parkhead this evening. He played in the first meeting with the Romanians in August when Dan Petrescu’s outfit rattled four goals behind Scott Bain to extinguish Neil Lennon’s side’s interest in the Champions League.

Ajer, speaking to the Evening Times, said: “I’m a young guy who wants to learn as much as he can. To go through every game with John Kennedy, who was also a centre-half, to learn tactically is very important and helpful for me.

“There’s always something you can pick up. As a human being, you will make mistakes, but the important thing is that you learn from them and, hopefully, you won’t repeat them.

“The penalty against Rennes? I absolutely could have and should have done better. It’s a learning experience. I look through all the clips with Kendo and we try to learn from it. The most important thing is it doesn’t happen regularly and, hopefully, it won’t.”

Ajer added: “It’s the most important thing as a footballer. It is easy to look through good games when everything is going smooth and you perform well. 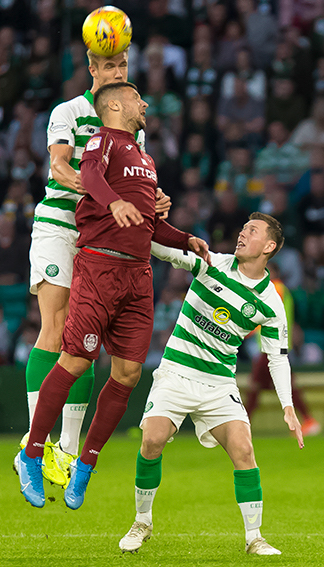 AJER AND HIGHER…Kristoffer Ajer repels a raid from FK Sarajevo.

“But they aren’t really the important games to look through. Those nights when you have been out of position, when you have been struggling a bit and you come off and think after the game: ‘I was involved in too many situations tonight’.

“Then it’s important to look through and learn from them. The backroom staff here work incredibly hard. I have never been at Lennoxtown when they haven’t all been in. I think it sums up this club. Everyone works so hard.

“I love playing for this club, but I know there are huge expectations. You are only as good as the last game you played.

“You have to improve and keep having good games. But I enjoy the pressure, enjoy having to play well. You always have to perform.”

That will be the case again under the floodlights in the east end of Glasgow as Lennon’s play their 10th European tie of the campaign.

The defence has conceded nine goals in those outings – Ajer has a part to play in keeping the back door closed again the Romanians on this occasion.