A DISTRAUGHT Steve Clarke stared in disbelief as Scotland were thrashed 3-0 by the Republic of Ireland at the Aviva Stadium in Dublin this evening.

It was one of the worst – if not THE worst – performances in the manager’s three-year reign as his shambolic Scots were swept aside by the rampant home side in a lopsided UEFA Nations League confrontation.

It was a match in which the visitors could do very little right and that was emphasised in the fading moments when substitute Billy Gilmour, on his 21st birthday, lined up a free-kick wide on the left. His accuracy and delivery were so awful the ball hopelesssly flew out for a shy to the Irish on the opposite flank. 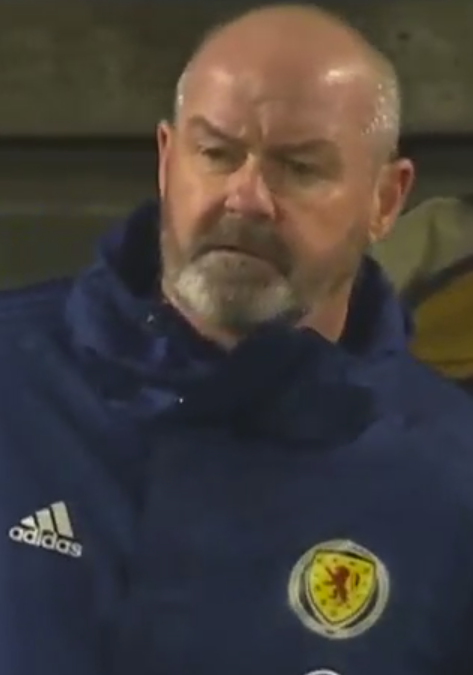 Scotland had one shot on target and that was a fairly feeble effort from the off-form John McGinn, who was later substituted, that was a gift for the keeper.

And with the team trailing 1-0 to a 20th-minute strike after Alan Browne bundled in a Shane Duffy header, the Aston Villa midfielder had the opportunity to equalise, but waywardly sent a low attempt wide of the right-hand post.

It was all over six minutes after the turnaround when the Irish battled for possession – as they had done from the opening minute – and the ball fell to Swansea’s Obafemi.

He let fly from outside the box and his dipping, swerving drive completely flummoxed Gordon as it flew over his flailing arms into the net.

The keeper was beaten again when Scott Hogan nodded towards goal from a tight angle, but Grant Hanley appeared on the line to hook the ball to safety.

Callum McGregor, busy as ever, did his best to galvanise his team-mates, but to no avail in an overall x-certificate performance.

Now Clarke realises the visit to Armenia has become a must-win game.

Much work is required between now and the 5pm kick-off on Tuesday.