The Hoops boss unveiled Japanese trio Reo Hatate, Daizen Maeda and Yosuke Ideguchi on Hogmanay and followed up four days later with the announcement the club had beaten Hibs, then managed by ex-Celt Shaun Maloney, in the race for the 19-year-old forward.

Kenny thumped in a double salvo in the first-half of the champions’ 7-0 romp against Wiener Viktoria last night in the first of their pre-season games.

The Irish kid displayed a finisher’s instincts by tucking away the opening strike after some good work by Mikey Johnston on the left and followed that up with a flash of swift reflexes to fire in the fourth goal. 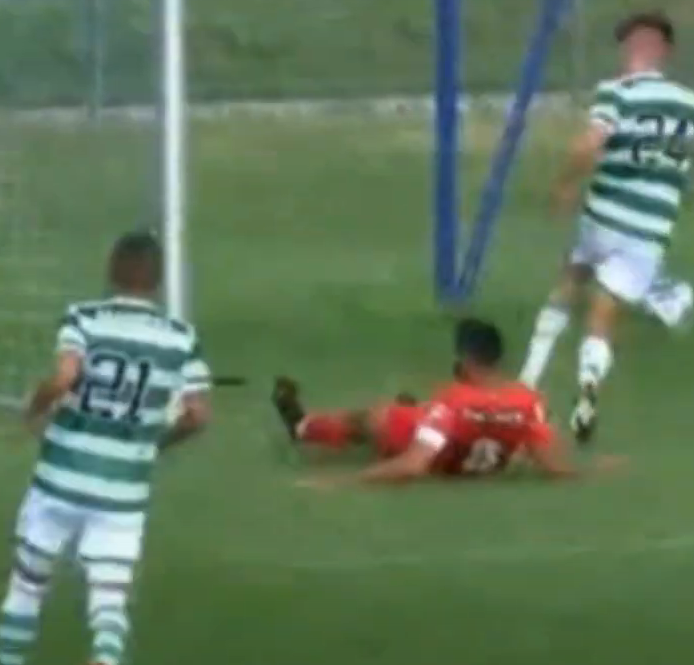 NUMBER ONE…Johnny Kenny tucks away Mikey Johnston’s low cross to the back post.

Understandably, Kenny, who was substituted at the interval with Albian Ajeti coming on, was delighted with the performance and said afterwards: “Yeah, it’s been good. Good to get out on the pitch with the first team for the first time and to obviously top it off with two goals and a 7-0 win.

“So, it’s been a good start to pre-season, but we keep going.

“For the first one, Mikey did well. I’ve played with Mikey before and I knew he would find me at the back post. Luckily, he did. The second one, Berna (Alexandro Bernabei) whips it in and I got a bit lucky, but had to be alive to finish it first time.”

Kenny, speaking to Celtic TV, added: “The gaffer wants us to press high and get after teams up the top end of the pitch because that’s where if we can capitalise on the press, we can get goals from it.

“The intensity levels are sky-high and it’s been very tough, but very enjoyable at the same time. You’re learning off Kyogo (Furuhashi), Giako (Giorgos Giakoumakis) and Albi (Ajeti).

Kenny is now hoping to get the nod from Postecoglou to lead the line against Rapid Vienna on Saturday as he attempts to kep himself in the first-team frame.