The Celtic midfielder toiled along with most of his team-mates against a smart and swift La Liga outfit who kept to their game-plan and exploited the weaknesses in the home side.

Emilio Izaguirre was exposed by the pace of the opposition and was caught out when they broke forward three minutes before the interval. The Honduran, who endured a torrid 90 minutes, played the Mestalla players onside and they capitalised with a close-range strike from Daniel Cherychev.

And the unfortunate defender took his eye off the ball shortly after the turnaround when Ruben Sobino was allowed to get in front of him to thump in a second from inside the six-yard box after a breakaway on the left shredded the Hoops rearguard.

McGregor could offer no excuses for the collapse of the Scottish champions and said: “In terms of organisation and counter-attack, Valencia were right up there.

“They almost lured us into a false sense of security and when we made one faulty pass – bang! – they’re in and they’re counter-attacking. 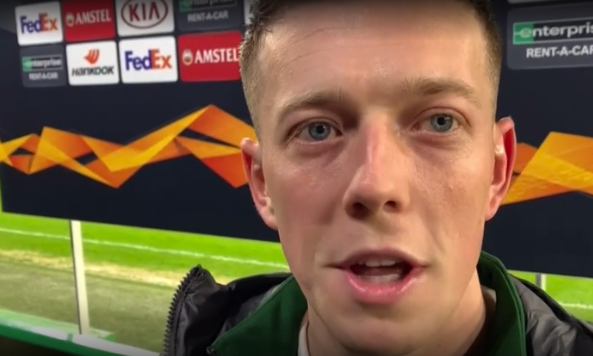 “So, I think we’ve got to learn from that. When you are at the top level, you have to keep the ball and when you give it away these top teams can punish you.

“I just felt as though we never looked after the ball properly.

“We’ve had a decent amount of experience here, so you can’t say it’s down to nerves.

“But I just don’t think we performed as well as we could have done on the night.

“We started well in the game, but then we lost momentum and then started giving the ball away.”

Brendan Rodgers’ men are facing the European exit as they prepare for Thursday’s second leg at the atmospheric Mestalla.

Only a miracle will prevent the Parkhead men from toppling out of the tournament to leave them to concentrate completely on winning the Premiership title for the eighth successive season and the Scottish Cup for the third campaign in a row, something the Hoops have never achieved.

If the Celtic players can rise above last night’s disappointment and focus on the rest of the term, they will go into the history books following an unprecedented treble treble.