Celtic Quick News on News Now
You are at:Home»Latest News»‘YOU GET THE MASK ON AND PLAY,’ DEFIANT CALMAC
By CQN Magazine on 3rd February 2022 Latest News

CAPTAIN Callum McGregor aptly summed up the refound spirit of reinvigorated Celtic under Ange Postecoglou only minutes after the breathtaking 3-0 triumph in the Glasgow derby in front of a sell-out 60,000 crowd at Parkhead last night.

The 28-year-old midfielder looked to be sidelined for over a month after sustaining a nasty facial injury in the Scottish Cup-tie with rough and ready Alloa only 12 days ago.

He was forced out of the reckoning for the wins over Hearts at Tynecastle and Dundee United in Glasgow, but there was no way he was going to miss the confrontation with Giovanni van Bronckhorst’s club with the Hoops just 90 minutes away from going top of the Premiership for the first time this season.

McGregor stated defiantly: “When you have half a chance to play in this game, you get the mask on and play.”

The skipper pushed himself through the pain barrier to produce a sublime performance in the middle of the park while Reo Hatate took the spotlight with a superb double and a sublime left-wing cross for Liel Abada to sidefoot the third goal past the bewildered Allan McGregor just before the interval. 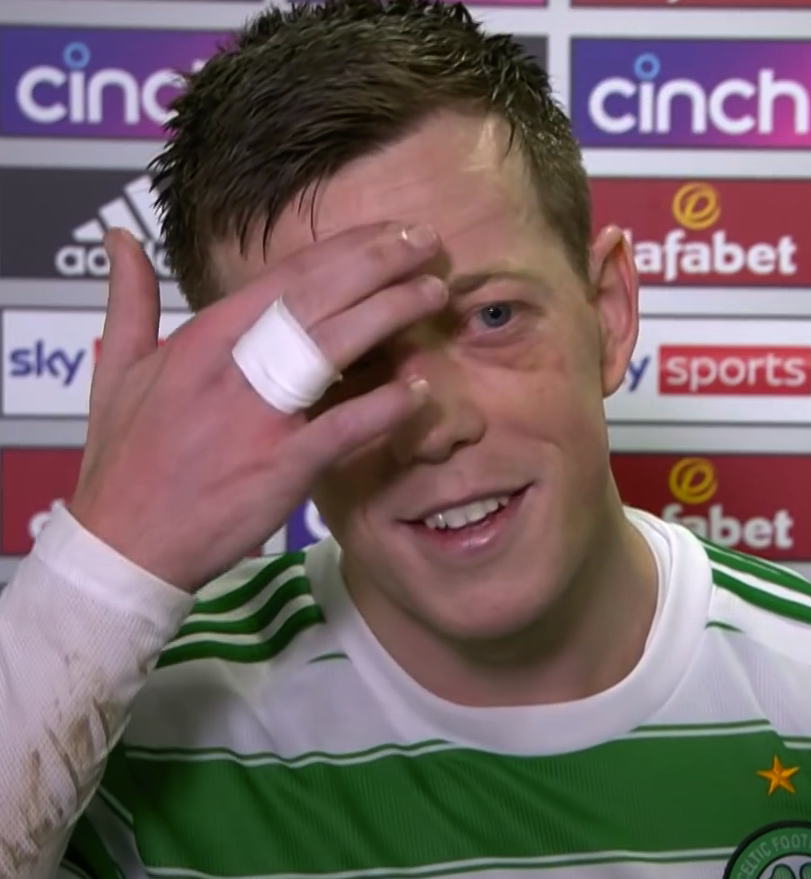 BRAVE FACE…Callum McGregor without the mask only minutes after the win. Image courtesy Celtic TV.

A clearly delighted McGregor said: “I thought first-half we were excellent in the football we played. We took our chances when we came and we know that was always going to be important.

“It was a fast start, we got the crowd going and a word for them, they were outstanding from minute one right through until 95.

“We put in a performance that the supporters can be proud of, but, equally, they gave us the energy to go and do it, as well, so it was a massive effort from everyone.”

It was a truly remarkable showing from the Hoops with Hatate, Matt O’Riley, Filipe Jota, Cameron Carter-Vickers and Giorgos Giakoumakis all playing in the high-tempo fixture for the first time.

McGregor, speaking to Celtic TV, added: “The last 10 days or so have been tough and I’ve been in a lot of pain. But I’ve been trying to rest as much as possible and taking it day-by-day.

“When you’ve got half a chance to play in this game, you get the mask on and play, so, hopefully, I’ll be alright over the weekend.

MASKED MARVEL…Callum McGregor celebrates with the fans after the emphatic derby victory.

“I’m happy for everyone as a club because they deserve this. There were a lot of boys making their debuts in this game and it’s a massive one, there’s no hiding from that.

“But I thought the way the boys delivered, the way we played with intensity, that’s what you need on nights like this.

“You need everyone working hard and running for their team-mate and, ultimately, you see the quality of the goals and our match-play was first class. That’s the mentality you need in these games.”

Celtic, a point ahead with 14 games to play, now face Motherwell at Fir Park on Sunday afternoon.

No-one would bet against McGregor leading out the team.