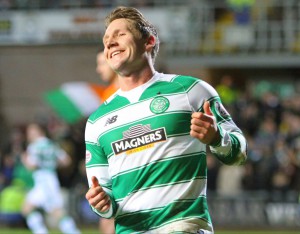 he club, is backing the midfielder to join the elite band of players to hit over a ton for the club.
Commons has struck 91 times and McGarvey reckons he is on his way to smashing the 100-goal barrier.
He said: “Kris is the player with the most vision at the club.
“I would have him in the starting line-up every week.
“Even if you don’t want to commit to two up front – which I still find staggering, especially at Celtic Park – then you could play Leigh Griffiths up front with Commons just behind him.

“I am willing him on to that 100-goal mark. I think he deserves every accolade that will come after that.

“He was a superb signing for Celtic and he is a great guy who has a lot of respect for Celtic.”