ODSONNE EDOUARD has admitted he does not feel pressure at being Celtic’s most expensive signing.

The French striker, who joined the Hoops in the summer in a £10million deal from Paris Saint-Germain following his impressive season-long loan spell, has told the media in his homeland he is just wants to play well and score goals for the champions.

Edouard said: “I don’t feel any pressure being Celtic’s main striker. I am calm and I just concentrate on doing what I do best, which is to play football.

“When I am playing, I give everything for my team. I am impervious to pressure. I have a quiet strength about me.”

The 20-year-old frontman revealed getting the opportunity to work with Brendan Rodgers was a major factor in his big-money switch.

He said: “I had a good chat with the manager. He told me about his projects and ambitions and spoke about what he wanted to do with me.

“I appreciated his words and it just felt like a good feeling with him. I immediately decided there and then I would sign. 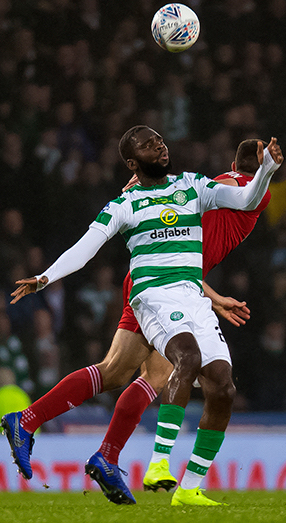 EYES ON THE BALL…Odsonne Edouard in action against Aberdeen.

“I needed a new challenge and you don’t refuse a club like Celtic.

“Brendan Rodgers is a very good coach. From day one, he spoke to me a lot and always encourages me. He is very experienced.

“He has made me a better player and I feel I am progressing very well under him.

“He’s an open coach who is very close with his players. I love his management style and the way he wants to play football.”

Edouard has claimed 12 goals in 26 appearances for the Hoops and is poised to lead the line against Kilmarnock at Parkhead tomorrow afternoon.

Leigh Griffiths was in at the start for the first time since the 6-0 win over St Johnstone on October 7 when he continued his comeback from injury and illness against Motherwell on Wednesday.

The Scotland international, who scored his sixth goal of the campaign during his brief subs’ appearance in the 3-0 victory at Hamilton Accies, missed a crucial penalty-kick as Rodgers’ men dropped two points in the 1-1 stalemate.

Edouard replaced the tiring Griffiths after the hour mark and is likely to be in the starting line-up against the Ayrshire outfit who are top of the Premiership, a point ahead of Celtic who have two games in hand.