CELTIC are just one win away from making European history.

If the Hoops overcome Rennes in their Europa League Group E showdown at Parkhead tomorrow night they will rack up their TENTH victory in Europe this season.

Triumph over the French outfit would be one more than Martin O’Neill’s men achieved on their way to the UEFA Cup Final in Seville in 2003 which was their previous best-ever total.

Jock Stein’s all-conquering outfit only played nine games – notching up seven successes – as they became the first British team to win the European Cup on May 25 1967 on an unforgettable day in Lisbon.

The format for Europe’s most prestigious prize, of course, has undergone radical changes since then.

A tenth victory in 13 outings – starting with a 3-1 triumph over FK Sarajevo in Bosnia in mid-July – may indicate Neil Lennon has found a way to perform at this level which eluded predecessor Brendan Rodgers. 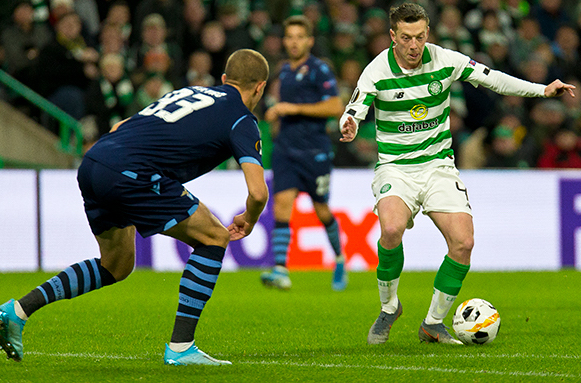 THE ITALIAN JOB…Callum McGregor in action in the 2-1 win over Lazio at Parkhead.

The win over Lazio in Rome, which came on the back of a 2-1 success over the Serie A cracks at Parkhead a fortnight earlier, opened the door to the knock-out stages of the competition next year while the champions can secure top spot in their section if they collect all three points tomorrow evening and Cluj lose in Italy.

Midfield anchorman Callum McGregor believes the team are capitalising from Lennon’s European experience as both a player and  manager.

Asked if the current gaffer was bolder than Rodgers at this level, the Scotland international, speaking to The Scotsman, answered: “He could be.” The results, he added, speak for themselves.

“We went to Lazio and I think people hoped rather than had any expectation, but when you deliver a result like that it changes everyone’s mindset.

“That’s what we have to do now as a team in Europe. We have been great domestically and that is still our bread and butter, we still have to look after that, but I think in Europe now we probably have enough experience where we can really go and try to do something.

“He (Lennon) is brilliant. You hear him talking all the time. Obviously, we know the European games are different games, you have slightly less of the ball. But you hear him talking about how we must still always have a threat, we have to try and score. 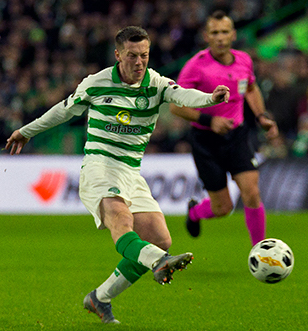 BY THE RIGHT…Callum McGregor fires a shot at the Lazio goal.

“When you score, especially away from home now, it puts you in a really good position to win the game, so it’s a bit of that. You can defend without the ball, but you still have to have an avenue to score a goal. Once you score a goal it changes the whole dynamic of the game. So, I think that side of it he seems to be really clued up about.”

Celtic now have the opportunity to top a European group for the first time, too.

McGregor added: “We have learned harsh lessons in the last couple of years when we have managed to get through, but finish second and get a Champions League team, which obviously makes it difficult.

“If you try to qualify top, then it’s that playing equal opponents thing. It is big for us. We know we have to finish the job. We have two games to finish top. That’s where we want  to be.”