CELTIC chairman Ian Bankier has admitted the club are counting the cost of the coronavirus pandemic.

The Parkhead supremo revealed a massive £10million-plus hit to the champions’ finances when the annual accounts were released.

However, supremo Bankier also insisted the Parkhead club are in strong enough shape to cope with the worldwide financial fall-out due to the virus.

Celtic’s total revenue was down £13.2million, while pre-tax profit toppled to just £100,000 having been more than £11million for the previous financial year.

The Parkhead club’s bank cash was also down by £10million to £18million – despite Kieran Tierney’s record £25million move to Arsenal – as Scotland’s title kings have suffered the loss of match day revenue from the end of last season’s curtailed campaign with the last game being played on March 7 in the east end of Glasgow when Neil Lennon’s men routed St Mirren 5-0.

There is likely to be further pain over the next 12 months as the figures released do not include the current campaign which, of course, is being played at an empty stadium with government guidelines banning even a limited number of supporters from attending.

Bankier, speaking to the media, said: “The overwhelming event in the year under review was the emergence of Covid-19 and the attendant restrictions on social movement and trade.

“This has had an adverse impact on our operations and our balance sheet. We, like many football clubs and indeed many businesses, are still grappling with the challenges the pandemic presents including the near term uncertainty. 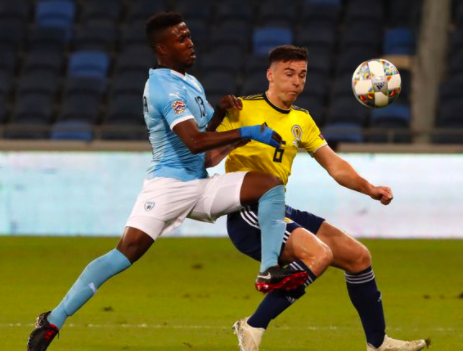 RECORD-BREAKER…Kieran Tierney was sold to Arsenal for £25million.

“However, the board continues to monitor the situation closely, taking proactive measures to ensure the club and our colleagues remain safe and is in the best position to allow football to continue.

“This was largely attributable to the value destructive impact of the pandemic across many aspects of our business.

“Nevertheless, these results are satisfactory in the circumstances at hand. Our year end cash net of bank borrowings was £18.2m (2019: £28.6m).

“Post year end we also took the opportunity to increase our existing revolving credit facility from £2m to £13m to provide a further buffer should it ever be required.

“The governmental restrictions imposed to protect public health continue to have a negative financial impact on the football industry.

“Our hard work and measured approach to investment in recent years has provided a degree of protection, but given the inherent uncertainty of the current environment, we must proceed and invest with a degree of caution.”

The team will now travel to France for their Europa League Group H clash with Lille on Thursday night before they return to take on Aberdeen in the Scottish Cup semi-final held over from last season.

A victory over the Dons will put the Parkhead club within 90 minutes of a remarkable quadruple treble – all TWELVE domestic trophies over a four-year reign – with the possibility of a grand finale against either Hibs or Hearts on December 20.

Unfortunately, there will be no bumper financial reward for the club while they are pised to go into the history books once again.