THIRTY-SIX years ago, on May 3 1986 at Love Street, Paisley, Davie Hay led Celtic to their thirty-fourth Championship.

It was one of the most dramatic, nerve-shredding climaxes in the club’s history as the Parkhead men pulverised St Mirren – and had to hope a result elsewhere went their way.

In another CQN EXCLUSIVE, author Alex Gordon opens his book files for a trip into Celtic’s glorious past to highlight another of the treasured memories that make this such a special and extraordinary club.

Alex’s fifteenth Celtic book, ‘50 Flags Plus One,’ covers all of the team’s fifty-one untainted title successes in great detail.

This is the story of what was termed ‘Mission Impossible’ as an unforgettable campaign came to a thunderous crescendo.

CELTIC were a mere seven minutes away from completing their Premier League programme for season 1985/86.

They were pummeling St Mirren 5-0 following a power surge that took them to a four-goal advantage at half-time. Alas, it looked like being a glorious failure after completing the run-in to the campaign without a defeat in their last sixteen games while racking up eight successive victories.

They desperately needed Hearts to lose against Dundee and, at that stage, it was goalless at Dens Park.

Davie Hay recalled the moment vividly. “We were coasting at Love Street to what might have been an impressive, but ultimately meaningless, win,” he said.”Then something quite amazing happened.

“I remember their goalkeeper, Jim Stewart, had the ball in his hands and was about to launch it downfield when a huge roar came up from the terracings. He looked startled for a moment. Our fans were going doolally. The transistor radios had imparted a gem of news and we all knew what had happened – Dundee had scored. 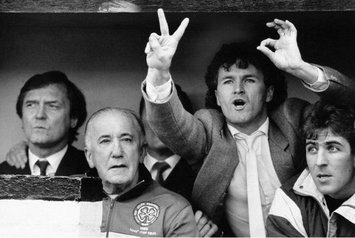 “I knew there were two players named Kidd on the pitch that afternoon, Hearts’ Walter and Dundee’s Albert. I was told Kidd had scored and, judging by the reactions of our support, I didn’t have to enquire which one.

“There was unconfined joy as the fans danced jigs everywhere and then there was another massive cheer. Dundee had scored again. The title was ours!

“Albert Kidd, a player I had at Motherwell during my days there as manager, had netted a second. Love Street was bouncing, the entire place was heaving. Then came the final whistle from referee Andrew Waddell and suddenly fans were on the pitch, scarves were being thrown at me and the players and it was just one big happy carnival.

“I allowed myself a moment. I was just so proud of what my players had achieved. I admired their spirit, their courage, their belief, their fortitude. Oh, call it what you like. They just refused to be beaten and they merited the accolades.

“The fans, too, deserved to join in the party. They had been our twelfth man and so many never gave up hope. On a personal level, I massively appreciated that.” 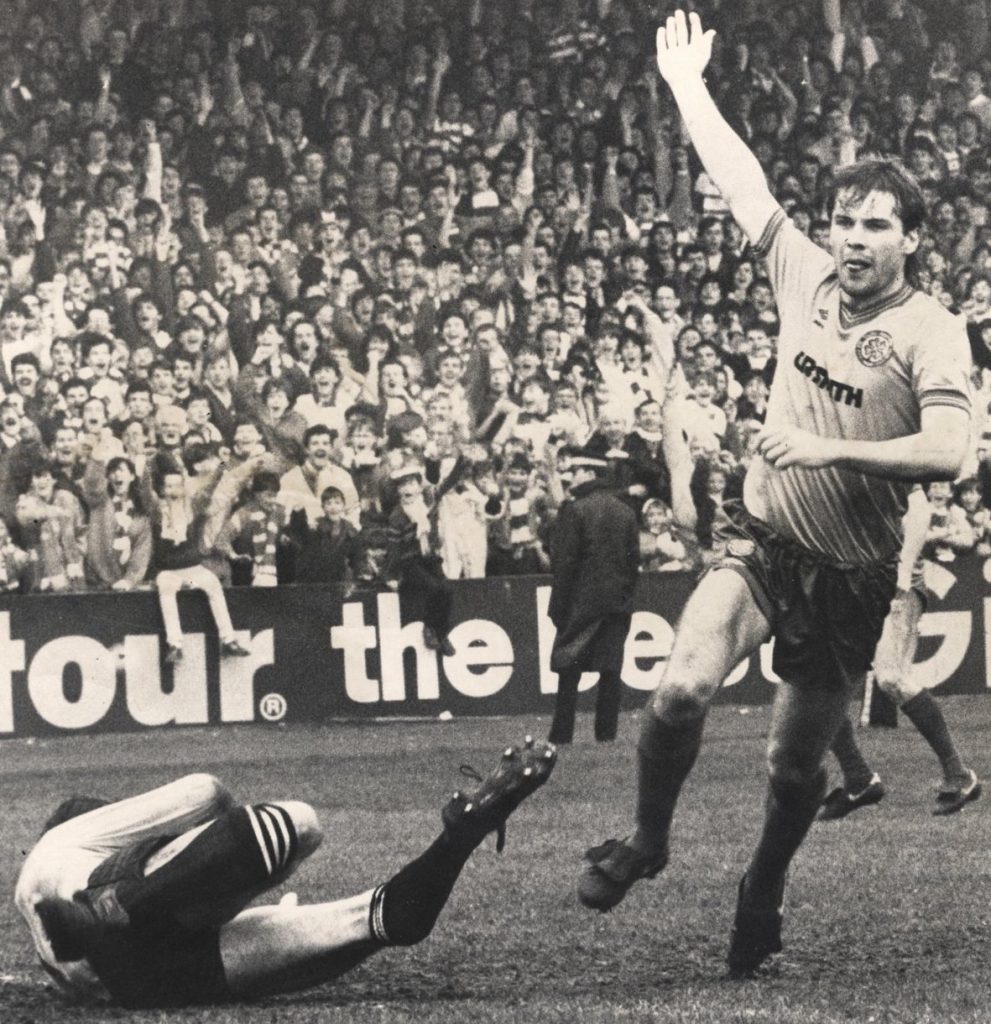 And yet, with seven minutes remaining, the Premier League championship was on its way to Tynecastle. It was as close as that.

“There are defining moments in football and in life when you realise the gods are smiling on you,” added Hay. “This was undoubtedly such an occasion. I had watched a sports programme on TV the night before and I was left with the impression that the silverware was as good as already in the Hearts trophy cabinet.

“Celtic were being written off by just about everyone. Believe me, that can raise the hackles. The following morning I picked up all the daily newspapers. Sure enough, they followed the same route. It appeared we were wasting our time bothering to fulfill our remaining fixture, the trophy was already bedecked in maroon colours. Oh, really?

“All the way to this deciding day I had been optimistic about winning the title. I’m not being smart after the event because I was quoted at the time. People may have thought I was trying to get a psychological advantage over the Edinburgh team. Maybe subconsciously I was. 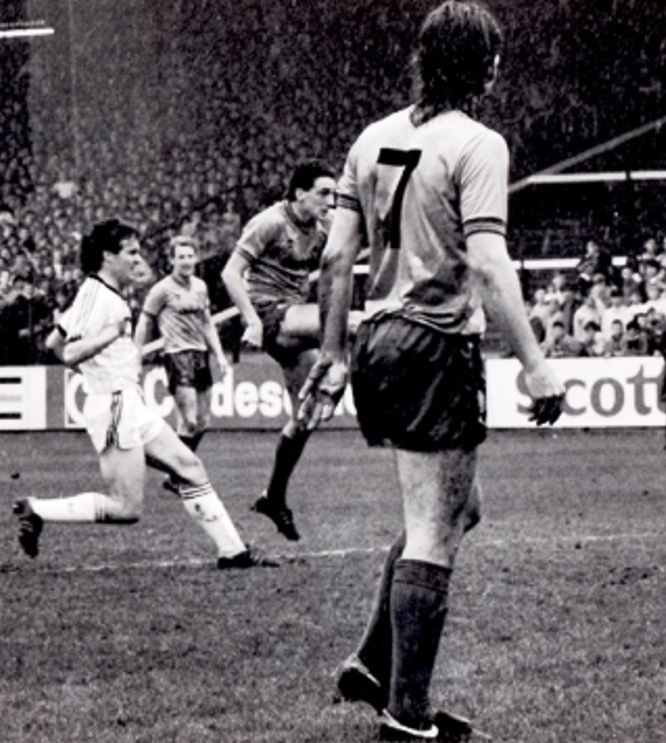 WALLOP…Paul McStay thunders in another goal before the interval with Brian McClair getting a good view.

“But the fact of the matter remained that I genuinely felt we could achieve what a lot of folk were tagging ‘Mission Impossible’. Really, a lot of them should have known better. We had won seven consecutive games – four away from home – to set up the big finale. To simply dismiss us was as insulting as it was stupid.

“My reasoning was simple. In the run-in, I believed Hearts would slip up somewhere along the line. I had witnessed it countless times before and I had to believe that they might not get the bounce of the ball in at least one game. To be absolutely fair to them, they kept on going.

“But I still persisted with the thought that we would get a break. Obviously, to a certain extent, it wasn’t in our hands. All we could do was keep on winning and hope the pressure would get to them.

“I could detect they were creaking a little bit during the run-in. On that fateful day, I gave one of the shortest team talks I have ever given any team. 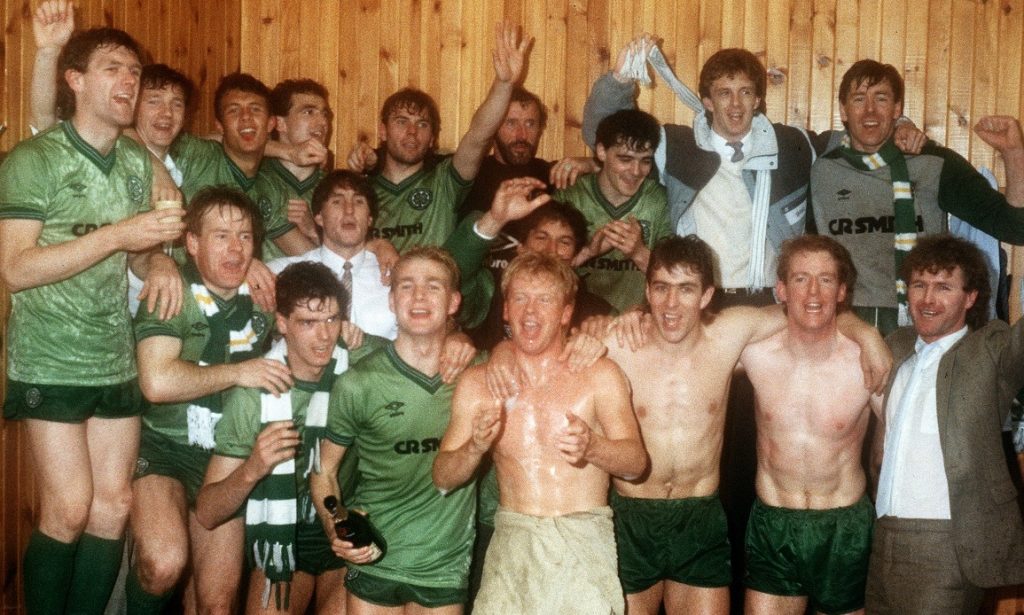 FLAG-HAPPY CELTS IN PAISLEY…the Hoops players celebrate after their epic title win on May 2 1986.

“I asked one of the backroom staff to cut out all the articles from the newspapers relating to ourselves and Hearts. The cuttings were pinned to the walls in the Love Street dressing room. When we arrived, I simply said to the players: ‘Go and read those notices.’

“I could see the steam coming out of some ears. They got the drift okay. Apparently, they were to be no more than bit-part players in Hearts’ day of celebration. That’s not Celtic’s style.

“Once the players had settled down and, just minutes before they took the short walk down the tunnel at Love Street, I merely said: ‘It can be done. We can win this title.’

“I looked around the dressing room and all I could see were determined expressions. I had never any doubts whatsoever that we would beat St Mirren in this game. I had said so often enough after our win the previous Wednesday at Motherwell. Now I knew we would not only win, but win well.

“In fact, win in the Celtic manner.” 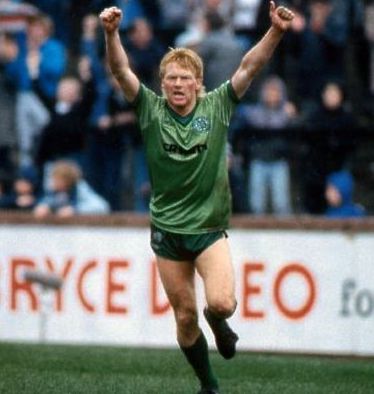 MO THE MERRIER…Celtic striker Mo Johnston displays his delight after the Hoops’ wonder goal in Paisley.

The players went at St Mirren in whirlwind fashion, snapping into tackles, spraying passes hither and yon, sweeping around the playing surface at full pelt, attacking through the middle and on the flanks and only too eager to keep Saints keeper Jim Stewart from wearying.

Brian McClair knocked in the opener in the sixth minute and Mo Johnston added two within a minute while Paul McStay almost took the net away with a first-time effort from the edge of the box.

“I was standing on the touchline in awe of my own team,” said Hay. “Everyone remembers Brazil’s fourth goal against Italy in the mesmerising World Cup Final in Mexico in 1970. I’m talking about the one where it seems every Brazilian gets at least three touches of the ball before Pele nonchalantly rolls a pass across to the right where the rampaging Carlos Alberto comes thundering in to first-time an almighty effort low past the bewildered and beaten Enrico Albertosi, the Italian goalkeeper. It was a fitting end to a glorious and memorable World Cup.

“Take it from me, Celtic scored a goal against St Mirren that was every bit as good and it was just a pity the planet wasn’t tuned in to witness it. Danny McGrain, a truly world-class right-back, started it on the edge of his own penalty area. He moved the ball to Murdo MacLeod who gave it back to Danny  as we were swiftly building a move down our right-hand side. 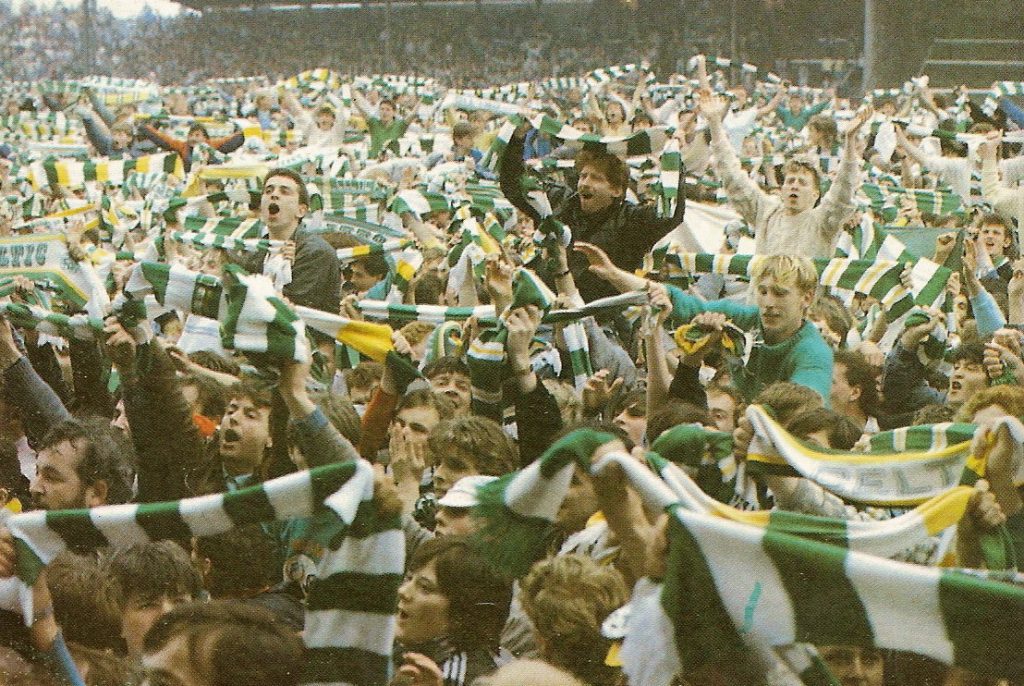 FAN-TASTIC…the Celtic supporters are delirious with joy after the 5-0 win over St Mirren that brought the club their thirty-fourth title.

“Danny shifted it inside to Paul McStay who switched it to Roy Aitken and once again the ball landed at Danny’s feet. He touched it on to Brian McClair and he flashed a ball across the face of the Saints goal. Mo Johnston, lurking in the danger zone as usual, came sliding in at the back post to nudge the ball into the net.

“It was all done at bewildering speed and it is right up there with any goal I have ever seen scored by any side. It was good enough to win the title on its own.”

Eighty-three minutes were on the clock with Davie Hay, arms crossed, standing on the touchline and admiring his team’s flawless performance. No-one could have blamed him for just a momentary thought that possibly the TV and newspapers had got it right; Hearts were going to win the league, after all.

READ ALL ABOUT IT…Alex Gordon’s fifteenth Celtic book, ’50 Flags Plus one’.

And then came the unforgettable moment when the fans raised the roof at Love Street and Hay knew the championship was coming home to Paradise. In three years as Celtic manager, he had delivered the Premier League title and the Scottish Cup.

“We had no champagne to toast the triumph because no-one had pre-empted anything,” added Hay. “Imagine that? We’ve just won the title and there was no bubbly to celebrate with.

“Well, actually, that’s not quite true. Someone produced a solitary bottle of champagne from somewhere – I think it might have emerged from the magic bag of masseur Jimmy Steele – and I got a wee taste.

“I made up for it later that evening.”